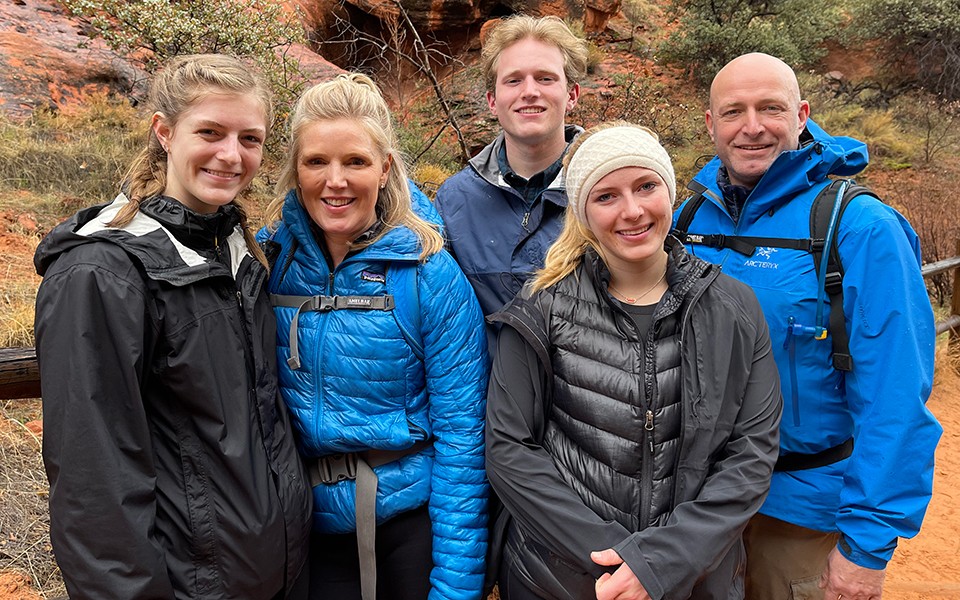 The Crumm family, above from left to right: Evelynne, Michelle, Phillip, Isabelle, and Aaron, hiked in Utah in December 2021.

“My motivating force doesn’t come from one single source,” says Michelle Crumm, a member of Eastern Michigan University’s Board of Regents. “But bravery, taking chances, and believing in oneself are very important to me. If you live in fear, you can miss out on opportunities.”

Flexibility, fortitude, and confidence have been constants throughout Crumm’s personal and professional life, including her time as a Regent. As a former chief business officer of Adaptive Materials, Inc.—a company she co-founded with her husband Aaron—Crumm developed an entrepreneurial “can-do” spirit. Coupled with an infectious sense of humor, she draws parties together and helps channel their collective strengths to move projects forward.

Crumm grew up as an only child in a family with few means in Westville, Indiana, a town of less than 6,000 residents. Among its most prominent landmarks are a 1930s water tower and the Westville Correctional Facility.

“We used to joke that Westville had more prisoners than residents,” Crumm says. “Of the 28 people in my graduating class, there were maybe six or seven who went on to college.”

She met her future husband at Purdue while earning her accounting degree. When he chose to pursue a doctorate in material science engineering at the University of Michigan in Ann Arbor, she followed and earned a master’s in business administration from the same institution. Afterward, she worked as an accountant for an automotive supplier and Kellogg Company but soon realized she preferred to run her own show.

“While the companies I worked for were great, I felt like a cog in a wheel,” Crumm says. “I left that work environment to launch Adaptive Materials with my husband. Our primary product was a portable fuel cell system for drones, which attracted the interest of the U.S. military.

“We felt the time was right to launch the company. We thought, ‘If other people can start a business, we can also do it.’ We really believed in ourselves and didn’t think anything could hold us back.”

“Maybe it was stupid bravery,” Crumm jokes. “We couldn’t afford lobbyists to connect with government officials, so we bought a ‘lobbying for dummies’-type book. We took risks and chances. I don’t like to live in fear of failure.”

“We had grown to about 60 employees by the time we sold the company [in 2011],” Crumm says. “It was a tremendous amount of responsibility, but very rewarding to work with a team of amazing people. Six of our former employees went on to start their own companies. We’re pretty proud of the entrepreneurial spirit we helped foster.”

Crumm’s link with Snyder led to her appointment as a Regent in 2014. In addition to developing and refining university policies and launching new campus initiatives, she enjoys helping underprivileged students find success.

“I fell in love with what Eastern contributes to the community, which is exciting because I live less than five miles from campus,” Crumm says. “I’ve learned a lot from Eastern students, particularly those who are in the MAGIC [Mentor Access Guidance in College] program.”

MAGIC helps Eastern students who have experienced foster care, homelessness, or a lack of financial support overcome those barriers and achieve academic success.

“I have a great appreciation for the challenges these students face,” Crumm says. “They’re absolutely remarkable people and their stories bring tears to my eyes. EMU is in my heart, and I’ll continue participating in MAGIC long after my term as a Regent ends.”

With three children (Isabelle, 22, Evelynne, 20, and Phillip, 18) in college, Crumm has taken on some consulting work in addition to fulfilling her role as Regent.

“I’m a personal finance geek,” Crumm says. “I’m working on a Certified Financial Planner license for fun. I love helping people put budgets together. For relaxation, my husband and I enjoy working out, mountain biking, and jet skiing.”

Crumm’s term as a Regent ends in December 2022. Until then, she continues to leverage her finance experience to help guide university initiatives toward completion.

“My whole life has been about perseverance and knowing when to pivot,” she says. “This is what I preach to my kids and what I try to do at Eastern. You have to know when to move forward and when to change direction. We’re beginning to see the benefits of some of the tough decisions we made as Regents four or five years ago. It’s about being brave and pushing things forward without fear.”

Editor's Note: This is the first in a series of feature stories about members of the EMU Board of Regents. We will be featuring a Regent each Wednesday from now through November.