Writing Her Own Way

EMU alumna Ayanna Floyd Davis proclaimed herself a Hollywood writer. Then she became one. 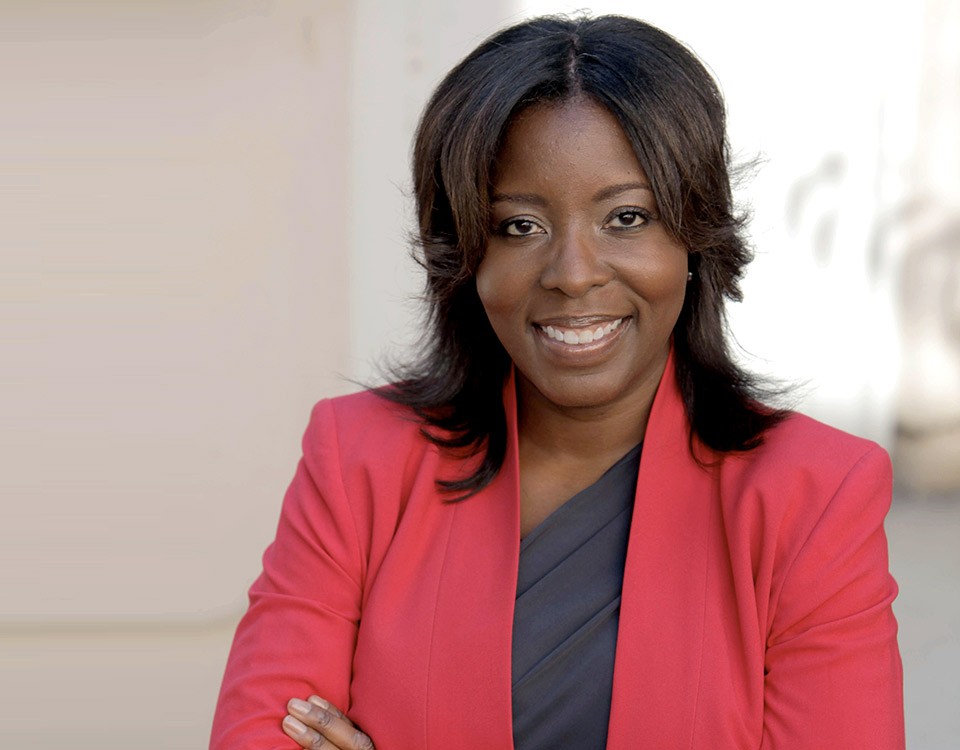 A few years ago, TV writer-producer Ayanna Floyd Davis (BS93) tried to read the script she wrote as a student at Eastern Michigan University and couldn’t. Her play, “From the Heart,” was sparked by the alumna’s deep dive into notable black wordsmiths while enrolled in an African-American lit class. But Davis wasn’t merely captivated by their writing—there, in that class, she realized that as a black woman, “I can write about black culture and black life from my point of view.”

Davis wrote “From the Heart” within a week in her Walton-Putnam dorm.

“It was just a whole new world,” she says, joyfully recalling her epiphany. “I said, ‘That’s what I’m gonna do—be a great American playwright.’” Davis laughs like it wasn’t possible, but even then, she was well on her way.

Bent on getting the script into the hands of a fellow African-American in the theater department—a tough feat, she says, considering “there were maybe one or two black people in that department”—her writing landed in the hands of Theatre Arts professor Wallace Bridges. Bridges immediately recognized Davis’ passion for her craft and didn’t just read her script—he wanted to direct it. “From the Heart” went into production and sold out two performances at Quirk Theatre.

When she returned to the script for the first time in two decades, she says, “I couldn’t get past page three. It was just that awful.” Still, Bridges, at the time, “was in it like he was producing a great American play,” Davis fondly recalls.

“It was less about the script and more about Ayanna’s commitment to writing it and wanting to see it produced,” Bridges says. “I believed in her and was glad to help in any way.”

Because of Davis’ ambition, not only did she play the lead in “From the Heart,” but Bridges also cast her in the role of Calpurnia in “To Kill a Mockingbird.”

Davis’ mother, Nora Floyd, recalls her daughter wanting to impress Bridges so badly that when he asked her if she’d read the classic novel, “She lied, told him ‘yes,’ and read the book that night.”

Minority representation on TV, including realistic portrayals of African-American life, was limited when Davis was growing up in Toledo, Ohio. Though she didn’t realize until much later that she could harness the power to change that, she was already demonstrating that TV can cross race and gender lines.

As a teen, she got hooked on ‘90s drama “Homicide: Life on the Street,” which she watched during weekly viewing parties with her girlfriends.

“It was such a strange show for all girls to be watching, and then all black girls, but we were so totally in love with this show,” she remembers. Impressed by the series’ storytelling approach, which was akin to a one-act play, Davis’ interest in TV was piqued. “I would be like, ‘Oh, that’s what I wanna do right there.’”

Davis says she was “just average” and “never a super smart kid,” with little interest in learning anything that wasn’t related to her passions: film, writing and African-American lit. Her creative ambitions were lost on most people, especially her father, an engineer, and her mother, a factory worker at General Motors.

“I was a black girl talking about art and creativity and plays and TV shows and writing,” she explains. “Nobody knew how to speak to that. Nobody knew what to do with me.”

Davis convinced her mother she was on the right track in a letter she wrote to her while at EMU. In the manifesto, the then-21-year-old proclaimed, “I want to be a filmmaker and this feels good. I want to be a filmmaker and I don’t care if I’m black, a woman and they say I can’t do it—I say to myself and to them, I am Ayanna Floyd. ... (My family) raised a strong woman who sees what she wants and goes after it no matter who’s done it, who’s doing it and who couldn’t get it done.”

Davis was a persuasive young woman, and her mother never doubted she was bound for greatness. Writing was no exception—though Davis admits now, cracking up, “I didn’t know what the hell I was doing!”

It did occur to her that, if someone “let me find a creative way to engage, I’m a superstar.”

At family gatherings Davis stole the spotlight, cracking jokes and flashing her dance moves. In her manifesto, she wrote, “Ever since I was a little girl, my family said I deserve a place in Hollywood. I was destined. But a kid from Toledo, Ohio? Far from all the glitz and glamour of Hollywood.”

At first, she figured broadcast journalism might be her ticket to Tinseltown, but during a journalism internship at WTOL Toledo, “I realized I didn’t have the guts for it. I just couldn’t pry the way I needed to pry, and I couldn’t get the story.”

Furthermore, merely rewriting national stories with a local angle in the newsroom suffocated her yearning to be creative. But her career began to flourish while telling original stories for the Eastern Echo, the university’s student newspaper. For the Echo, she wrote about a local Def Jam Comedy show, and insisted there be more stories from an African-American point of view.

“I can tell stories from any point of view because I’m a human being, but I do want to push stories that are culturally relevant, because I think we need more of them and that makes the world better,” Davis says. “And it informs people. And I’m black.”

After graduating with a telecommunications major and marketing minor from EMU and earning a master’s  in Film and Video from Columbia College in Chicago, Davis set out for Los Angeles in May 1998, just days after receiving her MFA. Her parents, trusting but still unsure of where her future was headed, drove her to LA.

The following year, Davis was among eight writers selected from more than 2,000 candidates to participate in Walt Disney Studios / ABC Writers’ coveted Fellowship Program, which provides access to employment opportunities for writers from diverse backgrounds. She was the first-ever TV drama writing fellow that year.

In 2000, she scored her first TV writing gig with ABC’s medical drama “Gideon’s Crossing.” She then wrote and produced for a variety of other series, many of them medical dramas (Davis had wanted to be a nurse but couldn’t stomach looking at cadavers, says her mother): Lifetime’s “Strong Medicine,” “Private Practice,” “Medical Investigation,” “Hit the Floor,” “Hannibal” and Fox’s hit show, “Empire.”

In 2016, The Onion’s pop-culture platform, The A.V. Club, praised Davis’ writing for the episode “Time Shall Unfold,” which aired during the second season of “Empire.” “Credit is due to Ayanna Floyd Davis, the former ‘Hannibal’ writer, who gets her script credit since joining ‘Empire’ for season two. She has a strong grasp on what the tone of ‘Empire’ should be,” critic Joshua Alston said.

Davis, once unsure of where her future would lead her, was ecstatic.

“I couldn’t believe it, because he hated every single ‘Empire’ episode!” she says. “Then, he called mine out and named me. It was so crazy. Really sweet of him. I was like, ‘Thank you!’”

Davis’ instincts about her career goals were astute. Broadcast journalism (and behind the camera, as a filmmaker, an early pursuit that didn’t pan out because “all that carrying of the equipment— oh, god; no way”) wasn’t where she belonged, and she knew that.

“But I will sit in my pajamas at a computer or with a paper and pen and write all day—I’ll do that!” she says, laughing.

Since her professional producing and writing career took off, Davis has witnessed the changing tide of TV—and has been a part of that change. Though “Gideon’s Crossing” featured black characters, it wasn’t their story. “You sprinkled black supporting characters in there, but the show wasn’t from their point of view,” Davis notes about the lack of black representation.

Black-centric shows existed, but not quite like “Empire,” which was a game-changer for black visibility on network TV when it premiered in 2015. Davis served as co-executive producer the second season.

“It opened the door,” she says, referring to a series with a black point of view. “It’s evolved, as has the world.”

That evolution has afforded Davis more opportunities to tell the stories she demanded be told while at the Echo: stories about the black community. “If you tell her the door is closed,” her mother says, “she’ll find a way to open it.”

In the hopper: two projects steeped in African-American history.

“I look for stories that inspire me,” Davis explains. “If there’s something I want to write, it may come from something in real life that inspires me or it may be an article I read or a person that I met.”

For instance, when she met a fellow student, Frank Stovall (BS94), at EMU, the two bonded about film and writing. As Stovall opened up to Davis about his hardships while growing up in Detroit, Davis envisioned a film about his life. She produced it, and two Detroit cameramen, Rodney “Hot Rod” Ferguson and Wendell “Wink” Burke—”great mentors to a few of us black students at EMU” that she met while they were visiting EMU—shot it. Their efforts resulted in a 10-minute documentary.

“Eastern just allowed me the freedom to come explore,” Davis says. “No one would tell me ‘no.’ If I asked for (use of) Quirk Theatre, it was, ‘Yeah, sure.’ (Or I’d) ask Wallace, ‘Would you read this?’ ‘Yeah, sure. And I’ll direct it.’ When you’re in college, you need people to just say ‘yes’ to you.”

“It all started at Eastern,” she continues. Consciously, yes. But, in fact, Davis was a writer before even she knew it, according to her mother. Nora has a photograph of Davis, age 2, stretched, tummy-down, on the floor. She was lost “in her own little world,” writing, her mother recalls.

“When I look at it, I say, ‘Oh my god, she’s doing it,’” Nora beams. “Sometimes we have these gifts and we never get to tap into it. It was just a gift. It was buried deep and nobody knew it.”

When Davis visited EMU again in the early 2000s, it was because she was mentoring a young woman, Brittany Cheers, a fellow Toledo native, who “had a rough life.” She gave Cheers a lift to the campus, bought her books and hoped she might find her way if Davis gave her a head start like Bridges gave her. (She did—in 2014, Cheers received her bachelor’s degree in psychology.)

“Time is oxygen,” Davis wrote to her mother in her manifesto more than 20 years ago, two decades before the Hollywood scribe returned home to Toledo with her “Hannibal” earnings to buy her mother a brand new Chevy Malibu. “Use it now before it’s gone.”