A Pinch for Good Reading 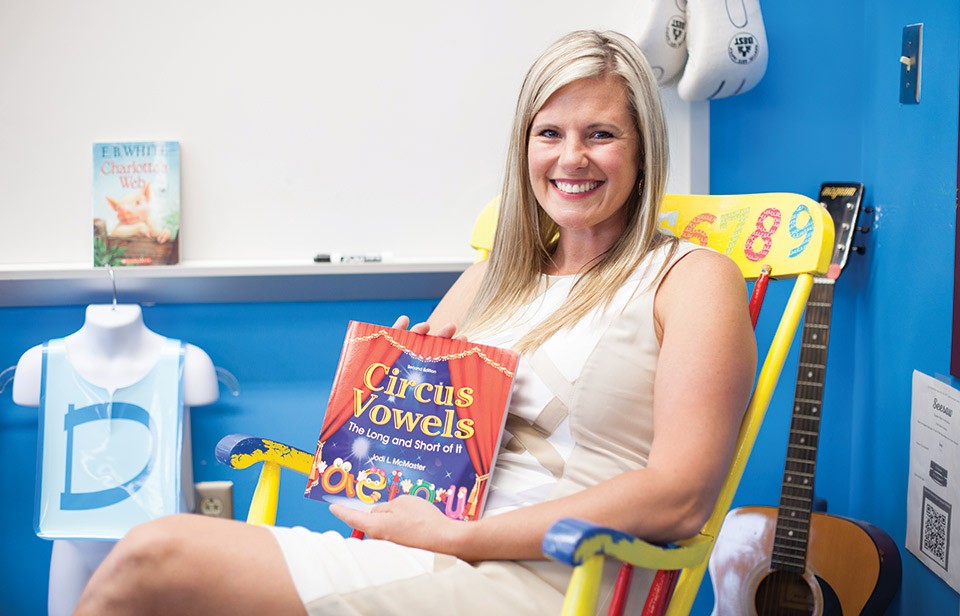 Long vowels, that’s why. But first grade teacher Jodi McMaster (BS02, MA08) knew her young readers were struggling to learn them, and she was struggling to teach them.

“I’d see students get confused and frustrated and want to give up,” she says. “And I thought, ‘This is crazy. I have to think of a concrete reading strategy that goes with all of the long vowels—something that kids can know and use when they get stuck on a word.’ ”

That’s how “Circus Vowels: The Long and Short of It” was born. McMaster created her own strategy to help students understand long vowels—the sounds they made and how they interacted with other letters. And she did it in a fun, colorful and innovative way, all set at a circus.

It’s a story that most parents and families can readily grasp.

As McMaster tells it, A, E, I, O and U are siblings and, like most children, it’s easier for them to behave when they’re by themselves. Add a sibling to the mix, and things change. The letter “e” in the word “pen” is pronounced differently from the letter “e” in the word “seal” because, in “seal,” the two kids were sitting next to each other, and the second vowel kid pinched the first one. This always happens. And the first vowel kid yells his own name after getting pinched. And the second vowel kid stays quiet, because he doesn’t want to get in trouble.

Imagine the “a” pinching the “e” in “seal” and you see how easy this can be for young readers to remember. To reinforce the concept, McMaster has created vests for each vowel for the children to wear, so they can act out the strategy—although she coaches her students to give more of a squeeze than a pinch.

Consonants in McMaster’s story are mom and dad, but kids can still reach around one of them and give a pinch. It’s only when mom and dad are both in between the kids that the pinching stops.

What was McMaster’s inspiration? All she had to do was think about going to church with her mom and sister as a kid.

“I would sit next to my sister, and I would kind of egg her on—pinch her or play with her hair,” she says with a laugh. “My mom would get really mad, and would come and sit between us, but I’d still reach around my mom and pinch my sister anyway.”

McMaster, who teaches at Saline Area Schools, has found so much success with this strategy that she’s written a book, “Circus Vowels: The Long and Short of It,” and has created an interactive long vowel reading strategy kit that includes vests, posters, word lists, worksheets and lesson plan ideas. She’s presented at conferences across the country and was featured on WXYZ-TV as part of National Reading Month 2017.

Her success has turned McMaster into an author and entrepreneur as well as a teacher, but teaching is still paramount for her. She cherishes helping young readers.

“Beginning readers just need one thing to grasp onto, and this story and this strategy make it really concrete for them,” she says. “I know this works because when I’m working with a child, all I have to say is ‘Look at your vowels’ and they instantly know.

“The beauty of this is that it works for every type of learner: visual, auditory and kinesthetic. My students beg to put those vests on. It’s so cool to watch, because they’re engaged.”