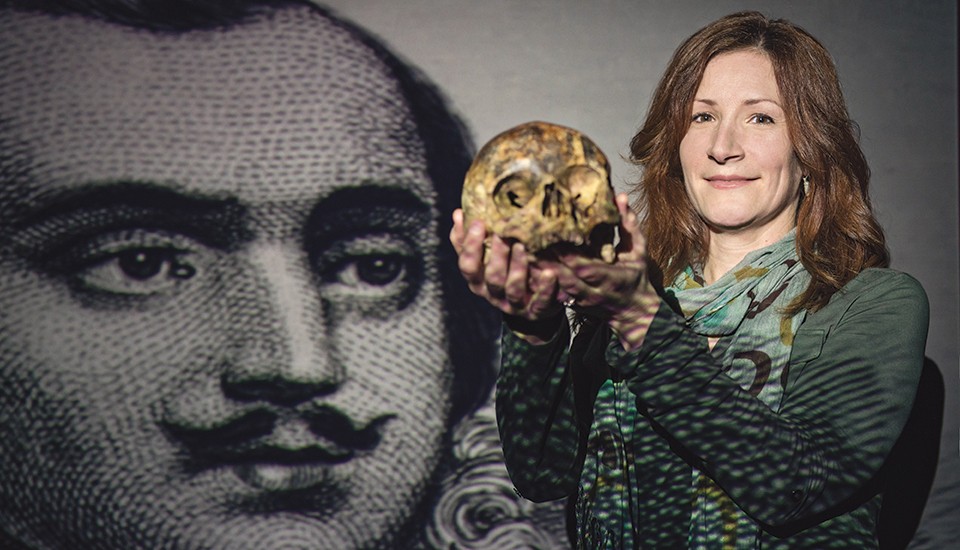 In her latest research, Moore is using modern forensic methods to solve a mystery involving Casimir Pulaski, one of the most famous military heroes of the American Revolution. (PHOTOS BY LEISA THOMPSON)

When she’s not teaching at Eastern, the associate professor of anthropology employs her forensic skills to analyze remains, solve crimes and answer important questions about human history.

“While I was in graduate school, I became involved in forensic work with Physicians for Human Rights,” says Moore, who helped identify remains from the 1974 Turkish military invasion of Cyprus. “I wanted to feel that my work made a difference.”

Many civilians who died in the conflict were buried hastily in mass graves.

“Some families never knew what happened to their loved ones,” Moore says. “During the summer of 1999 and 2000, our team identified about 200 remains and became involved with repatriations. It was like setting up funerals for families, nearly 30 years after the conflict. The experience affected me profoundly. It was incredible work, knowing we had a real purpose in people’s lives. That’s when I knew forensics was for me.”

The Cyprus project set Moore off on a career that’s taken her across two continents and to the Wayne County Medical Examiner’s Office. She’s also working to solve a mystery surrounding one of the most celebrated military heroes of the American Revolution.

ANATOMY OF A CAREER

Moore’s interest in forensics began with undergraduate classes on anatomical drawing and medical illustration. Later, she took a field course at an archeological school in Arizona, where she analyzed animal bones.

Over time, Moore’s interests shifted toward the effects of obesity on human skeletons. While pursuing her doctorate at the University of Tennessee, she conducted research at its Forensic Anthropology Center.

“The facility has a body donation program where researchers study the process of decomposition,” Moore says. “That gave me the chance to learn more about human anatomy.”

It also helped her pursue forensic work abroad. A visiting French archaeologist told Moore about excavations near Amiens in northern France. During construction of a freeway in the mid-1990s, workers discovered bones from a medieval cemetery. Archaeologists removed the bones for further research.

“A few years later, after receiving my doctorate, I developed a study abroad program at the institution where I taught prior to Eastern,” Moore says. “I tracked down the French archaeologist and discussed taking students there for bioarchaeological research.”

Archaeologists had put the bones and other artifacts in bags for later analysis, but Moore and her students discovered that the storage conditions were less than ideal.

“The bags were placed in a barn but not organized well,” Moore says. “We replaced bags, improved preservation and did an inventory. My students had individual research projects and obtained funding to support their work. Some exciting student projects came out of it, like an age estimator. I love it when my students do great research and present at symposiums. I want my students to be competitive when pursuing careers, and research programs like these are great opportunities for them.”

Moore has also lent her expertise to criminal investigations. In the late 1990s, she began working for the International Criminal Investigative Training Assistance Program. Through this organization, Moore taught anthropology courses to forensic professionals in Bogota, Colombia. Since 2013, she has served as a forensic anthropology consultant and an expert witness for the Wayne County Medical Examiner’s Office. She works on about 20 cases annually.

One was the murder of 22-year-old Chelsea Bruck, who went missing from a 2014 Halloween party in Monroe County. Construction workers discovered her body in an isolated area nearly six months later. Moore analyzed the remains and testified at the trial. The case gained national attention when NBC covered it on the program “Dateline.”

“Morgue work can be incredibly tragic,” Moore says. “When Chelsea’s mom came up to me and took my hand at the murder trial, it was all I could do to keep from crying. My experiences working in Cyprus and with the medical examiner taught me a lot about grieving and the trauma people go through. I can’t even watch scary movies. Even though I know the plots are fiction, they reflect real-world trauma.”

In her latest research, Moore is using modern forensic methods to solve a mystery involving Casimir Pulaski, one of the most famous military heroes of the American Revolution.

In the United States, at least 10 public and private schools are named for Pulaski. Hundreds of monuments, plaques, streets and parks across the country honor him. The U.S. Navy named three ships after him. Pulaski even appeared on a U.S. postage stamp.

These tributes stem from Pulaski’s heroic Revolutionary War exploits. Born to an aristocratic family in Warsaw, Poland, in 1745, he became involved in military affairs by his late teens. Always sympathetic to victims of oppression, he led an international force in the Russo-Turkish War (1768-1774). When the Turks were defeated, Pulaski escaped to France. By 1777, his reputation as a skilled cavalry officer and daring military commander reached American shores. Benjamin Franklin, acting as an ambassador to France, recruited Pulaski to fight for American forces.

Pulaski became a brigadier general and helped develop highly trained and cohesive cavalry units skilled in European-style tactics. When the British seized Savannah in 1778, he commanded the entire American and French cavalry in an effort to retake the city. During the siege, British cannon fire mortally wounded Pulaski as he tried to crash through enemy lines. Troops carried his body aboard a South Carolina merchant ship, where he died two days later.

That’s when Pulaski’s story gets a little fuzzy. By some accounts, he was buried at sea. Others say he was secretly buried in South Carolina or on a Georgia plantation. Nevertheless, Pulaski became a renowned military hero. But the bold warrior we thought we knew suddenly encountered an identity crisis in the late 1990s.

When the city of Savannah created a monument to Pulaski in 1854, officials exhumed remains thought to be Pulaski’s from the Georgia plantation. They placed the remains in a metal box and buried it beneath the monument. By 1996, the monument had suffered water damage and was slated for renovation. Officials exhumed Pulaski’s remains and made a startling discovery.

“A forensic anthropologist from the University of Georgia named Kar Burns looked at the bones, particularly the width of the pelvis, and said, ‘Wait a sec—this is a female,’” Moore says. “The bones exhumed suggest there were female hormones coursing through the body.”

Despite this anomaly, experts also noted broken bones in the right hand and skull wounds consistent with facts known about Pulaski. Other evidence indicates a significant amount of horseback riding.

“The researchers wondered if Pulaski was a female trying to pass as a male,” Moore says. “Kar Burns, who was one of my mentors, attempted DNA analysis. Tracking down a descendant wasn’t easy, since Pulaski never married and had no children. A great niece of his buried in Poland was exhumed, but DNA testing proved inconclusive.”

Additional evidence adds to the mystery. Church records from Poland state the infant Pulaski received a private baptism at home for unknown reasons. An X-ray of the skull removed from the monument shows an enlargement of the area containing the pituitary gland. This gland controls the release of hormones, including those that affect the sex of a fetus and child. Some researchers speculate Pulaski had ambiguous genitalia, a medical condition known as congenital adrenal hyperplasia.

Officials concluded that the remains were Pulaski’s based on overall bone structure, but didn’t discuss sex or gender in their report. They retained some bones and a tooth for future DNA tests and reinterred the remains in 2005 after the monument restoration.

Kar Burns died in 2012, leaving behind numerous questions about Pulaski. When the case was reopened in 2015, Burns’ daughter asked Moore to continue her mother’s work. Moore joined a team of researchers and historians using modern forensic techniques to dig deeper into the mystery.

“The previous team used a skeletal approach to confirm the remains were Pulaski,” Moore says. “Our goal is to follow up using DNA techniques that have evolved over the past 20 years.”

With funding from the Smithsonian Channel and support from an EMU Summer Research Award and Faculty Research Fellowship, Moore and a group of experts have reexamined the retained bones. A forensics lab in Thunder Bay, Ontario, is conducting DNA analysis.

“I’d also like to do a shape analysis of the skull based on the X-ray and have a forensic artist create a reconstruction to give a face to this person,” Moore says. “It’s an exciting project and very timely, considering the recent news about transgender enrollment in the armed services. Our findings could rewrite the history books and create a new type of American hero.”

Was “he” born a “she”? Did Pulaski suffer from a hormonal condition resulting in female physical characteristics? Or were the remains from that Georgia plantation simply someone else’s?
The answers will be revealed this summer in a Smithsonian Channel documentary.

In the meantime, Moore is teaching classes at Eastern and preparing to travel to Turkey this summer to participate in a bioarchaeological study of 2nd- to 11th-century burials.

“I never get tired of teaching and getting my students excited about research,” says Moore. “I’m very invested in my students and enjoy taking them with me to places like France. It’s wonderful to see them experience the thrill of scientific discovery for the first time.”