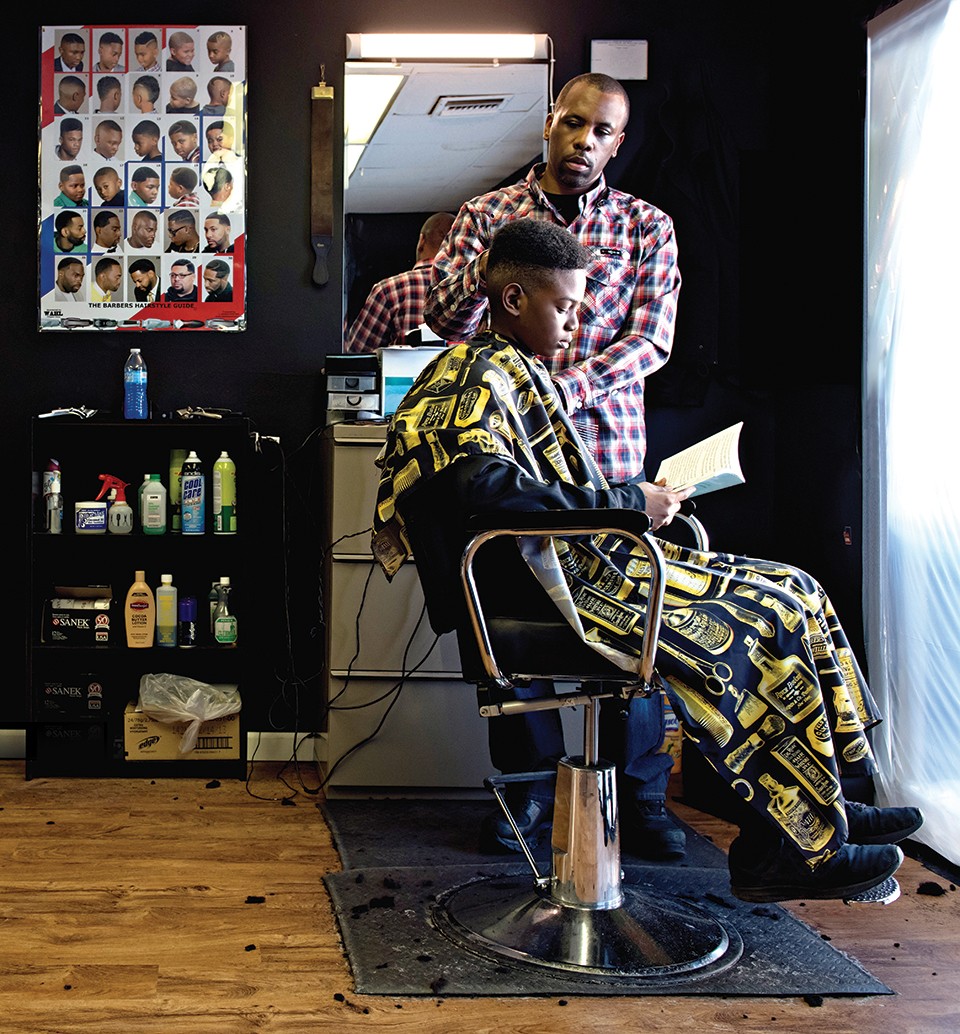 While doing some casual reading in his basement one evening a little over two and a half years ago, he came across an article about some remarkable barbers in Dubuque, Iowa; Tampa, Fla.; and Harlem: They had stocked their shops with books aimed at their youngest clients in an effort to inspire them to read. One even replaced the video games in his shop with books.

“It just hit me so hard how responsible these barbers were,” he says, “and it made me feel guilty that all this time I had an opportunity to do something productive within the 15 or 20 minutes I would have these kids and I wasn’t doing anything.”

Griffin had already been a barber for eight years, and he wasn’t about to waste any more time. He built a bookshelf that very night, bagged up all the books his and his wife’s three children had outgrown, and set up a library in his shop the next day. He also started visiting other African-American barber shops in town, books in hand, to enlist their participation. Read to Your Barber was born.

Seven other establishments signed on, each stocked with about 30 books, and they aren’t just inspiring reading—they’re incentivizing it. A youngster who reads while he’s getting his hair cut and who can correctly answer questions about the content gets either two dollars for himself or a two-dollar discount for his parents. Griffin says some parents are so enthusiastic about the program that they decline the financial sweetener.

While almost all of Griffin’s clientele is male, the offer isn’t gender exclusive. “A lot of sisters come into the shop,” he says. “I tell them, ‘If you read while your brother is getting a haircut, I’ll give you money also.’”

Media coverage has been not merely gratifying but also essential to the program’s survival. Many of the kids come in every couple of weeks, so Griffin has to keep the libraries fresh to keep the kids interested. He needs a steady supply of books, and they’re coming from all over.

“People from across the country are the 100 percent reason this program is what it is,” says Griffin. “After the Huffington Post did an article, 10-15 boxes were coming in every single day for a month. I was able to give every barber shop about 40 books, and we still receive books in the mail. I go around to barbershops about every five months and exchange the books out.”

He decided early on to focus on books that would give African-American kids a positive take on themselves and their heritage. “After I realized the impact of what it might entail, I wanted it to be a little more responsible,” Griffin says. “Our children really needed something to counter the negative imagery they were seeing every day, whether it was books about doctors, athletes, civil rights workers, inventors, so I really made a huge push for that.”

Eastern Professor of Education Carolyn Finch learned about the program when she was asked by Chelsea filmmaker Andrew Sacks to appear in “Grooming a Generation,” the documentary that began airing nationally last fall on public television. She was particularly impressed by how the collections were curated.

“I thought their book choices were fantastic,” she says. “They gave kids some very positive role models, and there’s a ton of research showing that this is a powerful process. It’s not just something that looks good; so many studies show the value of positive role models.”

These role models include the people providing the books as well as the people in their pages. “It’s a huge piece for urban kids to have a role model who can talk about the benefits of reading.” Finch says. “The big thing to me was the barbers working with the boys and being mentors for them.”

Part of the appeal of his trade for Griffin is how it positions him to have a positive influence in the community. “There are no airs, no hierarchy; everybody’s on an equal level in the barber shop,” he says. “Every time I’ve gotten a quote-unquote job, I’ve always gone back to the barber shop because it’s where I believe I can be most productive, talking with people every day. People trust me. I’m credible to my clients and my friends. I’m a service. For me to wake up and go to work and be able to open my own doors and turn on my own lights and have the type of camaraderie I have every single day, I couldn’t imagine myself being anywhere else or doing anything else.”

Sometimes unintended consequences are pluses. Griffin wasn’t expecting to share his young clients’ educational journey in quite the way it’s worked out.

“It’s so easy for us to know about Dr. King or Malcolm X or Rosa Parks,” he says, “but when these kids read me stories about not-so-famous figures, I learn a lot, I’m telling you. And since a part of the program is me questioning the kid after he reads, I have to pay attention. I think I may get more out of this than the kids sometimes.”

That’s setting the bar pretty high. Griffin says he’s heard from teachers and principals “how these kids now come to class raising their hand. When their paragraph comes around, they want to read. They said, ‘You have no idea the confidence these kids are gaining.’”

The program’s ripple effect is visible in the shop, too. “When you see a two- or three-year-old grab a book because an older kid is sitting in the barber chair with a book, now you’re realizing the influential part,” Griffin says. “I saw that over and over again and thought ‘this is a lot deeper than I expected. We’re really working on something big.’”

A couple of phone calls from strangers helped him realize how big.

The first was from Kentucky, in “the most stereotypical backwoods voice that you could ever think of,” Griffin recalls. “He said, ‘I’m just a poor country white boy from Kentucky but let me tell you something. What you’re doing is a great thing and you need to have those kids keep reading those black books.’ He completely understood.”

Then came the 80-something gentleman from Nebraska. “He told me about some black friends he had who were not able to read,” says Griffin. “He just wanted to thank me for starting the program because of people he knew personally who didn’t have the opportunity. I’ve talked to practically every major media circuit in the world, but those are the people that make me realize I must be doing something right. When regular folks just like yourself are saying ‘keep doing what you’re doing,’ that’s touching, that gets me.”

Griffin’s project for 2018 is called 12 Shops, 12 Libraries. “Any barber shop that wants to get involved, I can start them off with about 30 books and buy them a bookshelf,” he says.
“I want to put a library in one barber shop every month.” They’ll all be in southeast Michigan; despite coverage by the likes of CBS, NPR, the BBC and Fox News, and the offers of corporate largesse they’ve prompted, he’s been scrupulous about keeping the program local and community-based.

“This will be completely done by us: no sponsorship, no handouts,” Griffin says. “With just us donating books and bookshelves, we’re making it happen.”