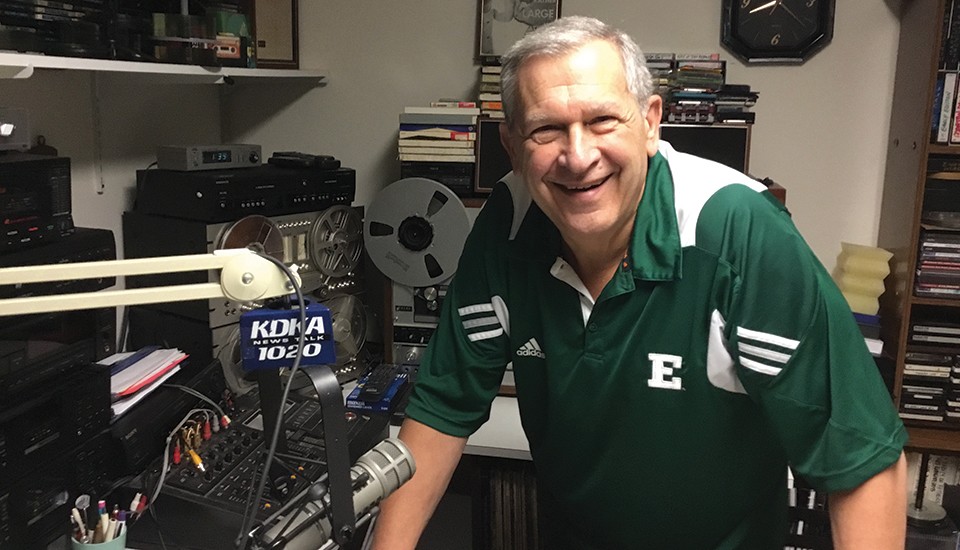 For four decades, Vuolo visited and recorded more than 700 on-air personalities working at stations of every format and location. His goal was to preserve the “art form” for posterity.   (PHOTO COURTESY OF ART VUOLO)

It started as a magnificent obsession—and became a life’s work.

The radio bug hit lots of kids in the late 1950s and ‘60s. But Art Vuolo (BS69) simply succumbed. When he was still a boy in Indiana, he listened to his rocket-shaped plastic radio in bed at night while nestled under the blankets.

After his family moved to Ann Arbor, Art began to spin the discs at high school dances after Friday night football games. He’d pick up a stack of 45s at a legendary local shop in exchange for a plug at the hop. “Music courtesy of Discount Records,” he’d say, while wearing a bright red show-biz blazer.

Vuolo attended Eastern, graduating in 1969 with a bachelor’s degree in speech—which at that time included courses in the booming academic discipline of radio-TV-film. EMU Regent Dennis Beagen was a graduate teaching assistant in the department during Vuolo’s undergraduate years. He remembers that the student radio station, WHUR in the Quirk Building, was “staffed with an energetic group of characters, including Art.”

Professor Bill Swisher, who was also a radio professional, was the faculty advisor to the young radio enthusiasts. “Bill had just the right personality to work with those kids,” Beagen recalls fondly. “He was patient and encouraging.”

It was under Professor Swisher’s hands-on brand of tutelage that Art came up with a brilliant idea. The young man worked at Big George’s appliance store on Stadium Boulevard in Ann Arbor. He sold radios and realized that many of his customers only listened to AM stations. They weren’t interested in more expensive AM-FM radio sets. In the interest of increasing his sales, Vuolo typed out a list of all the FM stations that could be received on the pricier models.

This was the spark that led to his concept of creating market-by-market station lists. Vuolo says, “People would hand me their road atlas and ask me to make lists of stations for, say, a trip to Florida, because the push buttons in their cars wouldn’t get anything once they got outside the local area.”

Soon he began selling his lists to advertisers and lined up a group of stores and restaurants to distribute what he called “Radioguides.” “The first official one came out in Detroit in 1971,” Vuolo recalls. The business grew steadily. In 1987, Nabisco bought Radioguides for more than 80 markets to advertise Baby Ruth candy bars. Ten million Radioguides were printed in 1995 for college football conferences, including the Big 10 and the Pac-10.

In the early 1980s, Vuolo’s day job earned him the honor of being dubbed “Radio’s Best Friend” by Scott Shannon, an on-air personality in Atlanta. Trade publications such as “Radio & Records” picked up the nickname and helped it stick.

The introduction of home video technology gave Art a new avenue to celebrate his beloved medium of radio. An early adopter of the Sony Betamax VCR, he began the “Vuolo Video Air-Chex” project in 1979.

For four decades, Vuolo visited and recorded more than 700 on-air personalities working at stations of every format and location. His goal was to preserve the “art form” for posterity. He describes his documentation of DJs at work as “video field trips into the studios of many of America’s best radio stations for an educational and often very entertaining perspective.”

Vuolo knows what the men and women whose work he chronicled meant to their listeners. Today he has a collection—a treasure trove—of more than 1,000 videos. It is a remarkable resource for aspiring radio talent, radio fans, and media historians.

The Radio Hall of Fame, located within the Museum of Broadcast Communications in downtown Chicago, is developing a permanent exhibit, “A History of the American Disc Jockey” with Vuolo’s collection as its nucleus. Visitors will be able to search and view the recordings at computer stations. Eventually, people around the world will be able to access the collection online.

In announcing the project, Radio Hall of Fame Chairman Kraig Kitchen expressed the enormous gratitude of the industry “for all the hours and years that Art has toiled at properly recording the best efforts in radio studios for decades and decades.”

“What I’m known for more than anything now is being an archivist,” Vuolo says, “preserving radio for future generations.”