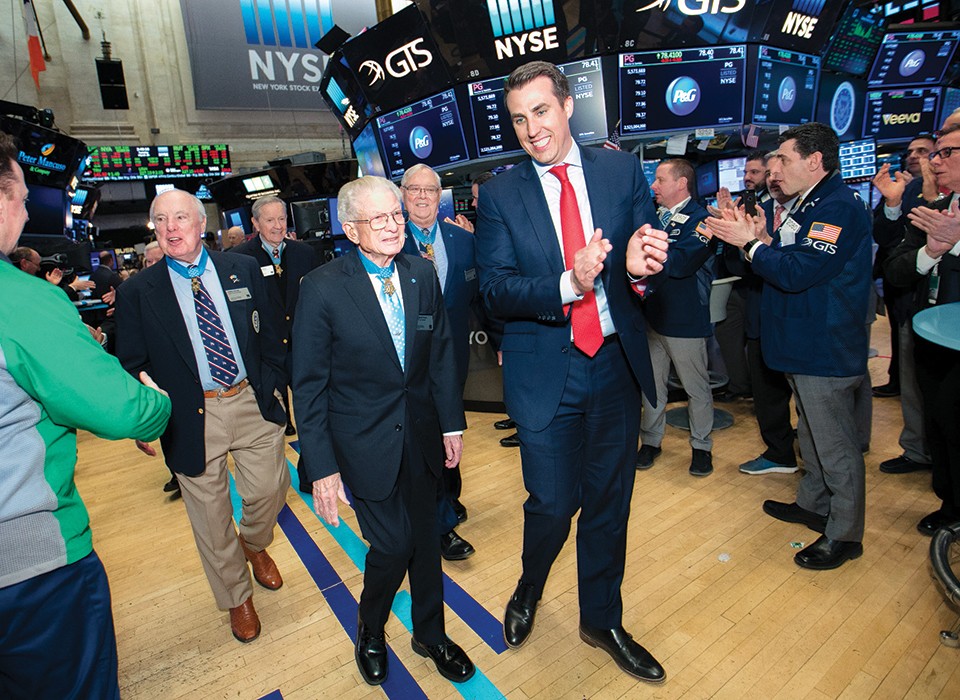 John Tuttle (BBA04) became the Chief Operating Officer of the New York Stock Exchange in May. Above, Tuttle shows retired U.S. Army Lt. Col. Charles Kettles (MS79) and other Medal of Honor recipients around the stock exchange before the 16th Annual Circle of Honor Dinner held at the NYSE on March 20, 2018.

One could argue that there are four buildings that define America as a nation: the White House, the U.S Capitol, the U.S Supreme Court and 11 Wall Street.

John Tuttle (BBA04) has worked in three of them.

For the past 11 years, Tuttle has worked for the New York Stock Exchange (NYSE). In May, he became chief operating officer. In that role, he’s responsible for 2,400 listed companies representing $28 trillion in market capitalization.

If those numbers aren’t staggering enough, consider that Tuttle spends about half his time traveling from Beijing to Brazil and all parts in between to meet with NYSE-listed companies or businesses looking to go public with IPOs (initial public offerings).

Oh … and his first child, Thomas, arrived in May. Tuttle maintains a home in Milford, where his wife Abigail and son live during the summer. So when Tuttle’s not keeping tabs on the stock exchange or meeting with global business leaders, he commutes from Manhattan to Milford to spend time with his family.

The path Tuttle took to Wall Street isn’t one he necessarily anticipated while earning his Business Administration degree at Eastern.

“I was a walk-on freshman for the football team and played wide receiver,” says Tuttle, who grew up in Milford. “I ended up breaking my ankle playing basketball with some buddies during the off season. Then I started wondering what I was going to do. I was always interested in public policy, so I thought I’d take a swing for the fences and apply for a job working in the White House.”

Tuttle landed a position in the executive office of President George W. Bush.

“I worked for the Political Affairs office during the 2002 mid-term elections,” Tuttle says. “Anything that appeared on the president’s schedule had to run through our team for approval.”

On the day Tuttle graduated, he received a fateful call from a former White House co-worker about an opening in the U.S. State Department.

“I ended up working in the office of [former U.S. Secretary of State] Condoleezza Rice, “Tuttle says. “For someone fresh out of college, it was the job of a lifetime. Any time a visiting president, prime minister or foreign secretary came to the U.S., we managed their visits. I also helped pull together leaders from the private and public sectors to be emissaries on presidential trips abroad.”

After that job ended, Tuttle earned an MBA at Notre Dame and planned on attending law school. That’s when another former D.C. colleague called about a job opportunity at the NYSE.

Since joining the NYSE as managing director of global affairs and government relations, Tuttle advanced to head of corporate affairs, chief of staff and now COO.

“My days are chock full of meetings about how we can move the business forward, how we can advocate for certain policies and initiatives in Washington,” Tuttle says. “Four times a week, I host the opening and closing bell. I’ve also hosted more than 100 sitting presidents, prime ministers and other heads of state.

“I get to meet the most interesting people in business, academia and government every day. A lot of them started a company with no idea how big it would become. They had an idea about how to do something better and worked their tails off at it. They made a commitment to build amazing businesses and have created tens of thousands of jobs. That’s very inspiring.”

Tuttle typically starts his day at 5 a.m. by reading the daily papers for news that affects the world economy. But the workday never really seems to end, even after the closing bell.

“You could work 24/7 and feel like you’re not doing enough,” Tuttle says. “The most challenging part is continually growing and adapting a 226-year-old organization. It’s like changing the wheels on a car while it’s moving. You try to evolve the business while making sure things are running smoothly.”

Tuttle admits networking helped him advance professionally, although he adds, “once you get in the door, you also need to find a way to stay there.” He encourages recent graduates to aggressively pursue their ambitions while leveraging connections.

“Don’t wait for something to come to you—go out and get it,” Tuttle says. “There’s a strong network of Eastern alums, including people holding senior positions in government and private equity. Find a way to get in touch with those people. They’re invested in your success and always enjoy seeing a fellow alum become successful.”