“Sick and Tired of Being Sick and Tired”: A Reflection and Some Resources by Toni Pressley-Sanon, professor of Africology and African American Studies 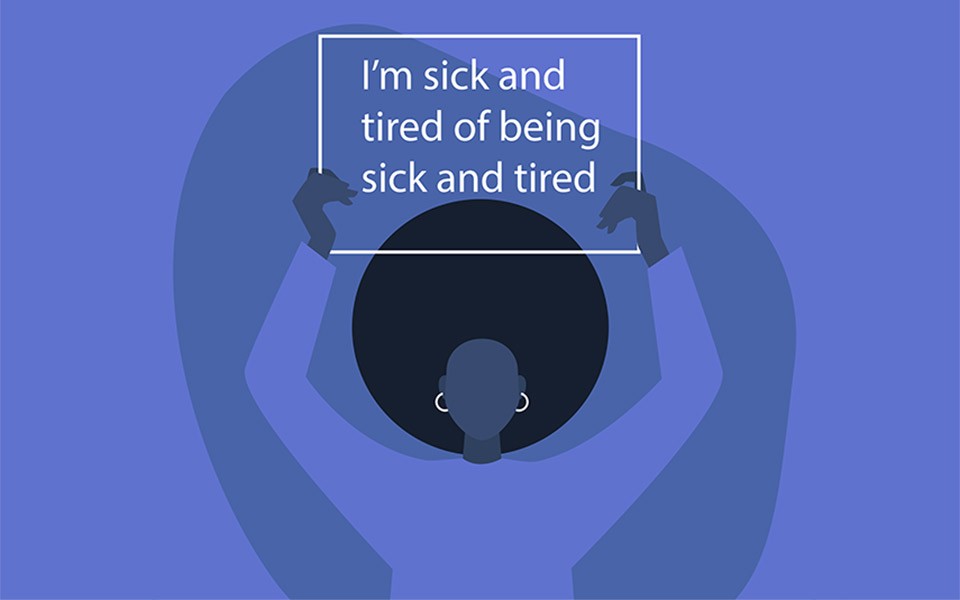 While browsing the countless images of protestors of racial injustice in the wake of the murder of Mr. George Floyd on Memorial Day (a holiday that originated with newly freed African Americans in 1868, by the way) I stopped to linger over the photo of an African American woman holding up a sign that read, “I’m Sick and Tired of Being Sick and Tired.” Her sign, poignant in its simplicity, recalls the famous statement by Mrs. Fannie Lou Hamer, a civil rights activist whose 1964 testimony before U.S. Congress about the injustices she faced as a black woman sharecropper was blocked for fear of the outrage that her truth-telling would unleash.

People of color must take up the space to speak our truths.

I write this short personal reflection because, like many of us, I was heartbroken and enraged by having to, yet again, bear witness to a Black man - someone’s son, father, brother, cousin, friend-- being murdered by a white police officer as other officers stood by. I write this because I have two brothers with whom, growing up, I shared countless little things like candy bars and secrets and arguments over who got the remote control; brothers who took the blame for me when windows got broken at home and defended me from bullies at school; brothers who make me laugh like no one else can.

I write this because I have a son for whom I would lay down my life in a second.

I know what you’re thinking: “So would we all.”

And that is exactly my point.

I, an African American mother of a beautiful young man who is spookily smart and gifted and one of the most caring people I have ever met, would, without hesitation, lay down my life for him.

But this is where history is important and where too many of our paths diverge. Because we must understand that the nature of the way that this land was dominated and colonized and developed means that my experience as a parent of color in 2020 is grossly different from those who are white.

And before we even do that let’s set the record straight. African people and people of African descent have been suffering under these systems of oppression--without respite--for OVER 400 years.

Our oppression began well before the “20 and odd” Africans set foot on the shores of a place named Point Comfort, Virginia in August 1619!!!

The legacy of those first enslavements also lives on.

We also need to remember that during the slave era there was the wide-held belief that Black parents did not have the same emotional attachments to their children as white parents. It was this reasoning that made it possible for enslaved mothers to be sold away from their babies--oftentimes before the babies were weaned--especially if a white mistress needed the enslaved mother’s breast milk for her own baby. This ideology is passed down from generation to generation, both directly and indirectly, in thought and in deed.

The blindness to this history and its legacy is found contemporarily in the seemingly innocent remark from white parents to black parents: “It must be terrifying to raise a black boy in America”. (See, Breathe: A Letter to My Sons by Imani Perry)

But here is the reality, in the words of someone who lived through the slave era:

“I never saw my mother to know her as such, more than four or five times in my life; and each of these times was very short in duration and at night. She was hired by a Mr. Stewart, who lived about twelve miles from my home. She made her journeys to see me in the night, traveling the whole distance on foot, after the performance of her day’s work. She was a field hand, and a whipping is the penalty of not being in the field at sunrise…she was with me in the night. She would lie down with me, and get me to sleep, but before I waked she was gone…”

Whenever I teach AFC 101: Introduction to Africology and African American Studies, I ask my students to reflect on the significance of Douglass’ testimony. Let’s take a moment to do it now: close your eyes and imagine Douglass’ mother, hired/sold away from her child before he had even reached the tender age of seven years (she was dead by the time he reached seven) working all day, doing backbreaking work in the fields and under threat of severe punishment, stealing away from her enslaver, to walk (and we must know, run) twelve miles EACH WAY to visit with him, to hold him, and watch him sleep.

Does that sound like a woman who does not love her child?

Today, we must reflect on the countless number of black parents who have to leave their children to work twelve-plus-hour shifts at minimum wage or below--if they can get it--to put the meagerest of meals on the table for their families.

And these meals often consist of “food” that sets them on the path of chronic illness, with COVID-19 now helping to seal their fates!

Now let’s imagine Emmett Till’s mother getting the news that her son has been murdered.

Now let’s imagine Trayvon Martin’s loved ones getting the news that their child has been murdered.

George Floyd’s mother had passed two years before his killing. Their bond remained, however, and he nonetheless, used her as a sacred invocation as he lay in the street dying.

Imagine the many other families, past and present…and then imagine the families are you and yours.

The way that slavery was able to exist and carry its legacy into the 21st century is the way in which it was built on constructing the “other” as less than human even as those who profited knew that the drug of white supremacy that they were pushing would inevitably end us all.

As Dr. Martin Luther King said, and as one of my students in my current course on Dimensions of Racism so beautifully summoned in her recent reflection paper said: “Injustice anywhere is a threat to justice everywhere. We are caught in an inescapable network of mutuality, tied in a single garment of destiny. Whatever affects one directly, affects all indirectly.”

As the writer and MacArthur Fellow Claudia Rankine so eloquently writes, “Anti-black racism is in the culture. It’s in our laws, in our advertisements, in our friendships, in our segregated cities, in our schools, in our Congress, in our scientific experiments, in our language, on the Internet, in our bodies no matter our race, in our communities and, perhaps most devastatingly, in our justice system. The unarmed, slain black bodies in public spaces turn grief into our everyday feeling that something is wrong everywhere and all the time, even if locally things appear normal.”

I must add that racism is not relegated to Black people. We must remember our indigenous brothers and sisters who have been victims of white supremacy in these United States, even before African people were brought here, and they remain so.

We must remember our immigrant brothers and sisters who continue to be othered and demonized.

We MUST stand in solidarity.

I am so grateful that I get to teach what I teach here at EMU. I’m even more grateful than usual this summer, as I have the privilege of providing a safe space for students to contextualize and explore what’s happening around them in the course I’m teaching, Global Dimensions of Racism.

I’m sick and tired to seeing and hearing from white people about what they think is happening in black communities and how to fix/heal it.

I want them to educate themselves, to listen to what people of color are literally screaming about our experiences.

So to end this personal reflection I want to offer, in the spirit of the reggae prophet Bob Marley, who said, “He who feels it knows it,” the words of people of color who know and feel what it means to suffer through and too often die from the disease of white supremacy and racism.

Because, like you, I’m an “egghead” as my beloved mentor, Teju Olaniyan, used to call himself, my first advice to anyone who is really interested in change, is to READ!!!!

Here is a VERY abridged list to get you started:

We Speak for Ourselves: A Word from Forgotten Black America by D. Watkins

So You Want To Talk About Race by Ijeoma Oluo

When They Call You a Terrorist: A Black Lives Matter Memoir by Patrisse Khan-Cullors and asha bandele

We Can’t Breathe by Jabari Asim

Breathe: A Letter to My Sons by Imani Perry

Back To Black: Retelling Black Radicalism for the 21st Century by Kehinde Andrews

Have Black Lives Ever Mattered? by Mumia Abu Jamal

Being Black: Zen and the Art of Living with Fearlessness and Grace by Rev. angel Kyodo Williams

Between the World and Me by Ta-nehisi Coates

Claudia Rankine, “The Condition of Black Life is One of Mourning” New York Times

Here’s a podcast to set you up.

Want to watch a movie?

Try: Race: The Power of an Illusion, available through our library website

Secondly, ask questions. One of the pitfalls of white supremacy and its close companion, privilege, is white people thinking they know the answers. Clearly, they do not.

Thirdly, white people need to have conversations amongst themselves about racism. People of color understand the importance of these conversations. We’ve been having them for centuries.

It would seem that too many white people still don’t get that racism is a WHITE PROBLEM, that it creates problems for everyone else.

As the incomparable James Baldwin said and which bears repeating, “Not everything that is faced can be changed, but nothing can be changed until it is faced.”

Let’s do the work.