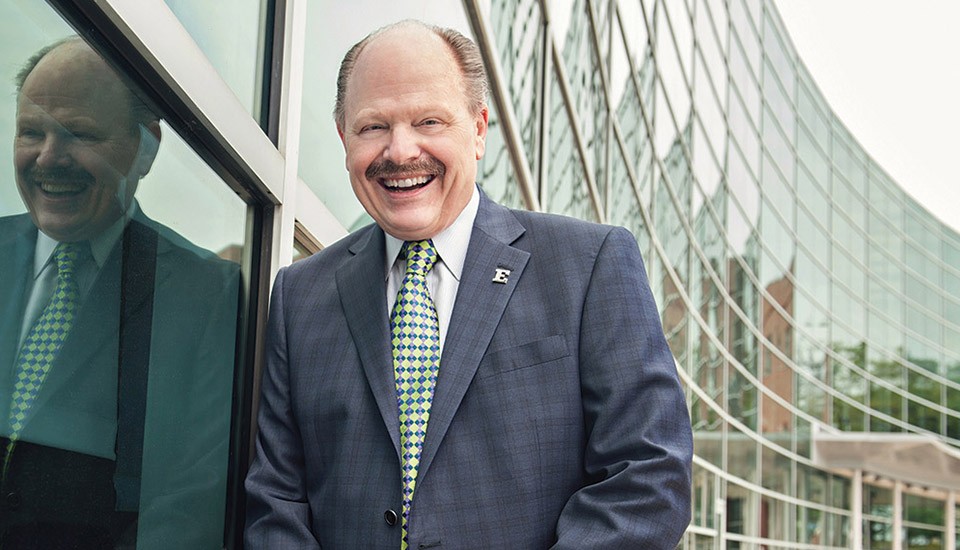 James Smith believes in connecting with people, so expect to see him interacting with students, faculty and staff at the Student Center and every place he travels on campus. (Photos/Leisa Thompson)

There is so much to admire about Dr. James Smith, EMU’s new President—from his expertise in economic development and educational leadership, to his penchant for collaboration between campus and community, to his ability to identify a vision and then map it out. The list is long.

So it may seem strange to start out with whistling.

But that is exactly what Dr. Tom Hawley heard when he occupied the office next door to Smith, who was then president at Northern State University in Aberdeen, S.D.

So often, said Hawley, who was provost at NSU, “I’d hear him come through the door whistling.”

That little detail says a lot about one of Smith’s biggest assets as he takes the helm as EMU’s 23rd president: Jim Smith is a likeable guy. He likes people and they like him. He laughs a lot. Makes fun of himself a lot. Listens—a lot.

“One has to be a good listener,” Smith says. “I’ve learned over the years that the more you listen, the more you can understand the context of a place you are leading. I will spend a lot of time during the first year doing a lot of listening and hearing the stories and absorbing those.”

That illustrates a very human, hands-on personality trait that impressed the EMU Board of Regents search committee. Michelle Crumm, who led the committee, said the board interviewed about a dozen candidates for the presidency. While Smith certainly looked great on paper, “once we got him into the room, he was immediately disarming, likeable, made fun of himself first. I thought, ‘This is what we need.’”

Smith’s experience in a variety of roles at a variety of universities, and his understanding of how the role of university president has changed, make him what many feel is the “perfect fit” for EMU. And his wife, Dr. Connie Ruhl-Smith, is an added bonus for EMU and the community. Ruhl-Smith has had her own long career in academia and promises to be a great asset to Michigan.

“I think 25 years ago, this job was much more centralized,” he says. “Now it’s much more decentralized. No modern university president can do day-to-day management of all the elements of a university and be successful. Every year, fundraising has become a more essential element of who we are as president.

“Also, shaping the message about the university is much more important than it was a decade or two ago. I spent a lot of my time at Northern with state legislators and governors—and potential investors—giving that six- to seven-minute speech about who we are as a university. We’re asked to be more branding agents than we’ve ever been before.”

Being able to evolve as needs dictate is crucial, and Smith has done that from the beginning of his career as an elementary school teacher throughout his path to his position as NSU president in 2009. In between, he focused on educational leadership, development, faculty and student initiatives, and encouraging an international presence on campus.

NSU, a small school with 3,500 students, saw the fruits of this myriad, multi-faceted journey. Says Hawley, “The first thing he did at NSU was wisely establish a strategic plan that was his. The University had not had an updated strategic plan for a number of years. He worked hard the first few years to establish strong recruitment, graduation and retention rates.” Hawley notes the major “internationalization of the campus.” Ruhl-Smith, who was NSU’s director of special initiatives, was key in this effort.

Smith also brought in the school’s largest-ever gift of $15 million, and oversaw the building of a major new athletic facility, an extension of the fine arts center, and the updating of dormitories.

Hawley says the Aberdeen community deeply respected and liked Smith. The local paper described Smith’s “charismatic and forward-thinking leadership,” adding that the news of his departure “came as a gut-punch to many faculty and staff.” That Ruhl-Smith would be leaving also was a “double blow.”

In his description of his experience for the search committee, Smith wrote, “I strongly believe in connecting the university to the broader society. Given all that I have learned about Eastern Michigan University, I believe that bridging opportunities, so as to make broader societal connections, must be undertaken by the next president; I stand ready and able to do precisely that type of connective leadership.”

He outlined several other important priorities and lessons: the power of philanthropy; the importance of strategic planning and broad-based consensus; economic development and collaborative relationship-building; the importance of internships, joint research and co-op arrangements, and the work a university must do to transform itself into a place with a genuinely distinctive identity.

Collaboration, Smith says, “is probably one of my better skills. I really believe that universities don’t exist in the old ivory tower anymore. The separations between campus and community, campus and state politics, campus and regional politics are diminishing quickly.”

Smith believes in being a highly visible leader. To that end, he says, “No one appreciates a president who sits in her or his office and doesn’t have face time with the various constituent groups. I like to walk campus from building A to B and talk to students and faculty along the way. I like to be visible to the community.”

Since Smith and Ruhl-Smith are both Midwesterners, they had been to EMU a few times for educational conferences and both are impressed with the campus. But Smith also heavily researched EMU and continues to talk weekly to Interim President Don Loppnow. So far, he can say that “Eastern has a nice history of working with international students. I think there is more that can be done. I think within the College of Technology there is a lot of opportunity to do things more robustly in the international market.”

When asked if the jump from a very small rural institution to a large metropolitan one is intimidating, Smith replies, “People are people,” no matter where you are. But, he adds, “I wouldn’t have taken the presidency of Eastern if I didn’t think it was a good fit with where I’ve been and what I’ve done and what I’ve been able to learn.

“As my wife says, I’m intense, I’m type A. I love to succeed. It’s not for my personal ego. For me, it’s really seeing the University become better and strong, and to see EMU on the national stage. You can’t let fear paralyze you. You just have to keep pushing the agenda forward.”