YPSILANTI – The Eastern Michigan University Police Department has committed more than 610 hours, equivalent to 76 full eight-hour days, in the investigation into identifying the criminal or criminals responsible for the incidents of racist vandalism that took place on Eastern’s campus early this fall.

The efforts include the execution of seven search warrants, two of which took place last week. In addition:

All told, six EMU police officers and two dispatchers have been assigned to elements of the investigation, and several others have assisted. 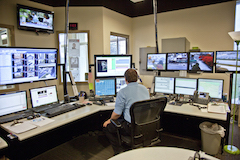 Eastern Michigan University Police Chief Bob Heighes said, ”We have been working hard on this case from the very beginning, and continue to do so to this day as evidenced by the two new search warrants that we executed last week. We continue to follow up on leads, and the utilization of technology to track wireless log-ins, cellular data and social media is an active part of the investigative process.”

“The $10,000 reward is generating information and tips and we remain as determined as ever to solve this case,” said Heighes.

“While these hateful actions made some of our students feel unsafe, it is important to note that during the time period since the first incident occurred, and through all of 2016, Eastern Michigan University did not have a single aggravated assault incident take place on our campus,” said Heighes. “Eastern remains a very safe place.”

EMU Police efforts related to the racist vandalism investigation are in addition to the day-to-day work to patrol and assist students, faculty and staff on campus and in patrolling areas of Ypsilanti surrounding the campus.