Summer Brings a Flurry of Construction

It's orange fence season at Eastern Michigan University. Here's a look at all the activity around campus and in Dining Services. 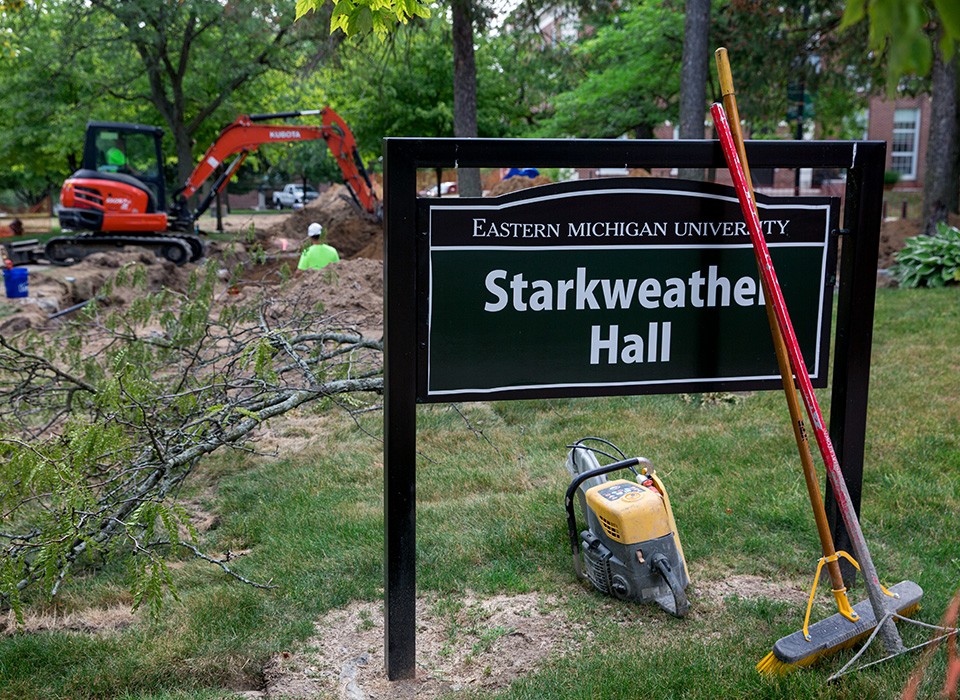 Ditches, fencing and piles of dirt appearing throughout campus signal a summer full of construction activity. (Photo by Brielle Bashore)

Ah, ’tis the season to wonder what in the world is going on all across our normally open and verdant environment. Orange barrier fences, piles of dirt, stacked pipes, bulldozers and their rolling relatives dot the 800 acres that make up the Eastern Michigan University campus.

Summer time at EMU always involves lots of construction, but this year brings a special array of distinct projects, including a wide variety of Dining Services activity.

Want to know all the neat things that make navigating campus such an eventful trek this summer? Here’s an illustrated guide to all the capital construction projects, complete with cost and estimated time of completion, along with a summary of the new Dining Services developments.

Campus Heating Plant Co-Generation Project: ($19.6 million) This important, landmark project involves installation of a 7.8 mega-watt natural gas powered turbine to generate electricity and steam from the turbine exhaust. The turbine will produce approximately 93 percent of the campus’ electric needs, and generate approximately 98 percent of the campus thermal needs, in the form of steam heat.

On June 8, the University used a 500-ton crane to install the 55-ton turbine into the Heating Plant, lifting the turbine through a 24-foot by 30-foot opening in the building’s façade.

The new co-generator will result in an annual reduction of 32,600 tons of carbon dioxide (CO2), equivalent to: 78.2 million miles driven by an average passenger vehicle; or, preservation of 260 acres of forests. The project will achieve annual net energy savings to the University of more than $2.8 million. The project is expected to be substantially completed in January 2018.

Loop 1 Replacement: ($7.5 million) This is the summer’s most pervasive and visible project, with ditches, fencing and various barriers appearing throughout the southern and eastern portions of campus. The project involves replacement and conversion of the old 4.8kV (Kilovolt) primary electrical service loop with a new 13.2kV loop. When completed, the new Loop 1 will provide primary electrical service to 20 buildings on campus, including Boone, Ford, Hover, King, Marshall, McKenny, Pease, Pierce, Roosevelt, Sherzer, Starkweather, Strong, Mark Jefferson, Welch, Quirk, The Honors College, 601 W. Forest, and the Heating Plant.  Individual building connections to the new loop will take place Spring/Summer of 2018. The project is set for substantial completion in fall 2018.

Swing Space: ($3.1 million) In support of the upcoming Strong Hall Renovation project, there are a variety of miscellaneous modifications taking place to existing classrooms, offices, and other areas on campus aimed at freeing up space. The majority of the work is taking place in the Sill Hall auditorium, the Roosevelt Hall auditorium, King Hall, and Mark Jefferson. The project is set for substantial completion in August 2017.

East Circle Drive: ($1 million) This project involves complete reconstruction of the roadway, adding new drainage and new lighting along with replacing/reworking of the sidewalks and crosswalks, plus improved ADA accessibility and featuring a new, boulevard style entrance to the road. The project is scheduled for substantial completion in August 2017.

Campus Security: ($750,000) The project continues the University’s ongoing effort to maximize campus safety and security. This summer’s work involves the installation of security cameras and more than 100 light fixtures on 90 poles in and around the mall area on the south side of campus. There are now more than 800 cameras on campus. The project is scheduled for substantial completion in fall 2017.

Quirk Hall Upgrade: ($400,000) This project involves cosmetic upgrades of the Quirk public spaces, including both theater lobbies, the first level main corridor and the restrooms.  Included in the upgrades are painting, new flooring, furniture, restroom partitions, countertops and signage. The project is scheduled for substantial completion in August 2017.

Freshmen and returning students will find a variety of new dining features this fall after an active summer of renovations and enhancements. The projects, all of which are scheduled to be completed by fall semester, are part of the University’s agreement with its dining partner, Chartwells. The projects include:

New Starbucks: This popular gathering spot has been moved to the first floor of the Student Center, in the space that formerly served as the game lounge. The new Starbucks opened in June, and will feature an expanded menu, offering warm pastries along with breakfast and lunch sandwiches. The new site will soon also include Wi-Fi and more furniture on the adjoining outside patio. Garage-style doors open to the Student Center food court, leaving a nice, open feel.

Build A Pizza: You’ll be able to build your own pizza at this site, which replaces Zatar. You can choose your own ingredients and your pizza will be ready in 120 seconds, says Jayne Carroll, retail director for EMU Dining Services. The facility is patterned after new pizza operations that promote fast cooking.

Hasty Rabbit: This healthy eatery will occupy the spot used by the Lobby Shop this past year. Visitors can build their own salad and enjoy fresh made sushi, which moves from the Crossroads dining area.

Lobby Shop: The shop will move to the former Starbucks site, on the second floor of the Student Center. The shop will again feature fresh soups and pastries in a grab and go format.

Chick fil-A: To be located in McKenny Hall, adjacent to the Student Lounge. The facility, which features its nationally popular chicken sandwiches, is scheduled to open in August 2017.

Crossroads: Changes in this facility, located next to the three tower residence halls, include a minor facelift aimed at better serving students. Einstein’s Bagels is going away, to be replaced with a late-night pizza spot that will also offer hot cookies – to help get students through those late night study times. The Crossroads will also feature a new condiment bar, an expanded beverage center and a new cashier area. The deli area will open earlier than in previous years, and will offer hot breakfast sandwiches and bagels along with hand-dipped shakes.

Eastern Eateries: The eateries, located amid the commons area for Putnam, Walton, Phelps and Sellers residence halls, will offer an upscale salad bar along with a Grill Nation and 2Mato, featuring pasta and pizza.

Eagle Cafes: The cafes in Pray Harrold and Halle Library are being upgraded, to improve traffic flow and shelving areas. The Eagle Cafe in the College of Business will be converted to a 24-hour vending-based market (with new food delivered daily), to better service students taking night classes at the college.