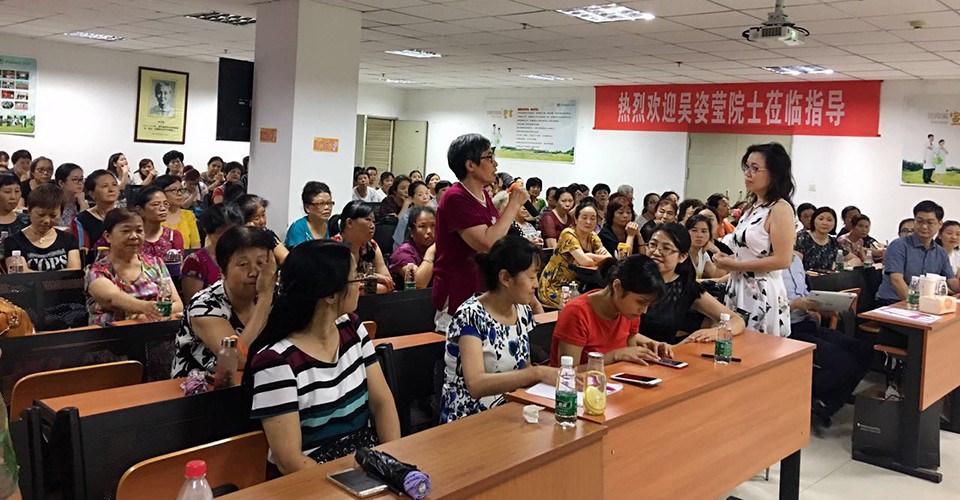 Tsu-Yin Wu interacts with nurses in Sichuan during a recent trip to China.

It’s a jarring statistic, and it continues to drive the research and extensive public outreach and advocacy that mark Tsu-Yin Wu’s career.

Wu notes that the majority of American women with breast cancer are diagnosed quickly and locally, when many can strongly benefit from treatment. But in China and other parts of southeast Asia, the majority of women aren’t diagnosed until they reach stages 2-4, when treatment becomes far more problematic.

Wu, a professor of nursing and Ph.D. program director at Eastern Michigan University, has sought to overcome the barriers—language, culture, policy, geography—that hinder Asian women from getting breast cancer screenings.

Her work in cancer control planning and implementation began in Michigan in 2000, and expanded globally this past summer, when she worked with Susan G Komen to translate its breast cancer screening toolkit for implementation in China. One of the trainings reached 1.2 million people through live stream.

This past summer’s work builds on Wu’s existing efforts in Michigan, in which she has served as director of the Healthy Asian Americans Project (HAAP) since 2007.

Working with community-based organizations in Michigan and the state Department of Health and Human Services, HAAP promotes health and well-being for Asian Americans through education, research and advocacy.

With funding from various federal agencies and private foundations such as Komen and Kellogg, HAAP’s bilingual navigators helped thousands of underserved Asian Americans to obtain health care coverage and access to preventive health and cancer screening.

“The funding support allowed us to recruit bilingual representatives who are trusted in their respective communities, for the role of navigator,” Wu said. “The navigators are trained in the fine points of health care issues, and go on to serve their communities.”

For Wu’s global work in breast cancer, Susan G Komen has funded three phases of her work since 2012.

This past summer, as part of Phase III, Wu built on preliminary work in the cities of Xi’an and Shanghai, and expanded implementation to larger geographical regions of China.

In June 2017, she trained staff from anti-cancer agencies and breast cancer survivors from Inner Mongolia and Chengdu, plus the Chinese cities of Nanjing, Chenzhou, and Guangzhou with the goal to continue promoting breast health awareness and early diagnosis in the areas they live.

Last April, she spent a busy week in China, helping train physicians in Xi’an, conducting meetings and visits in Shanghai and presenting at a conference in Jiao-Jiang.  Her group did a live, streaming broadcast for the training that at one point reached 1.2 million people. Communication efforts also included sending materials to a vast audience on WeChat, the Chinese version of Facebook, to which millions subscribe.

The project seeks to foster broad collaboration in increasing capacity for cancer control and early detection of breast cancer in China. It’s one of many ways in which Eastern Michigan connects with the global community.

Following this summer’s dissemination of materials in community settings, project leaders, including Wu, will identify successful efforts and evaluate their progress. Wu will help discuss those outcomes and apparent best-practices at the Komen Tool Kit Conference, to be held in Shanghai this October, and project leaders will pursue further collaborations with other community and clinical partners.

Wu, who’s from Taiwan and received her bachelor’s in nursing there, earned her master’s degree and doctorate and post-doctoral fellowship at the University of Michigan.

She acknowledges her command of Chinese helps in her massive public outreach effort, although just as important in securing funding is her track record with various funding organizations and her personal commitment to the effort.

“There’s technology available, but not all women are able to access it,” Wu says of the situation in China. “And there’s no policy that mandates population-based breast cancer screening. This is why our work in spreading information and awareness and fostering collaborations with stakeholders—saving lives in the process—is so timely and important.”