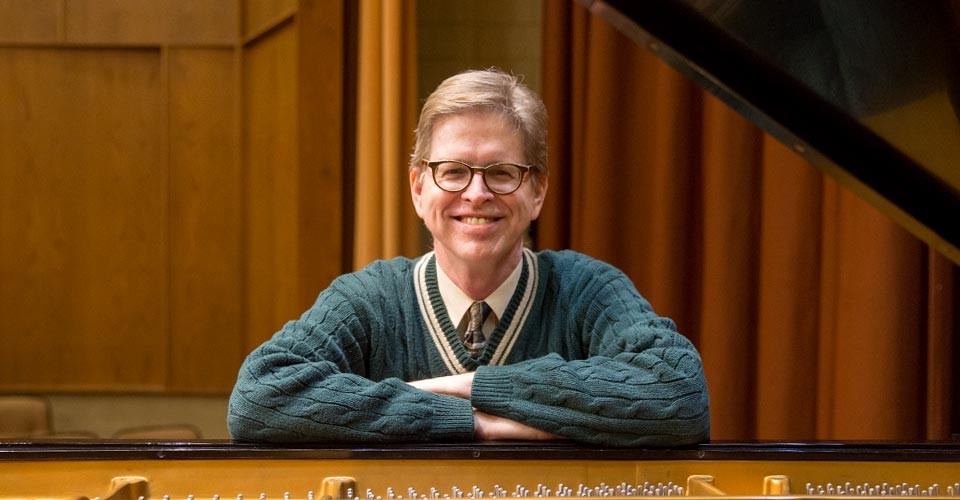 A little over nine years earlier, on a visit to New York, the Eastern Michigan University piano professor got an unexpected chance to chat with the 93-year-old Henry Steinway, founder of the legendary Steinway & Sons piano company, shortly before his death.

When Pedersen asked him what achievements he was especially proud of during his long career, Steinway told him about a remarkable World War II project that Pedersen had never heard of. 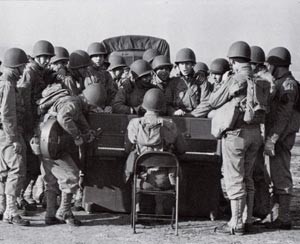 When the U.S. entered the conflict in 1941, supplies of raw materials were diverted to the war effort. This included metals that were key components in pianos, so piano makers either had to manufacture something else or go out of business.

Steinway hit on the idea of building small, lightweight, inexpensive uprights that could be shipped overseas for use by the troops or USO performers. Called “Victory Verticals,” they contained only 33 pounds of metal, about a tenth as much as a normal piano.

“I came home from that interview thinking I must be the last to know about this,” Pedersen recalls. “It took me years of bringing it up with colleagues and friends to realize nobody knew about it.”

And that bugged him. It was such a fascinating, positive story, and pianos were at the center of it. “I didn’t expect at this point in my career to become a fanatic about this particular project,” he says, “but it just sort of adopted me and, after years of trying to keep it at bay, it took me over.”

At this point in his career, with an impressive record as performer, pedagogue and judge to his credit, such surprises are, well, surprising. Pedersen has taught piano at Eastern for more than 25 years, producing prizewinners in national and international competitions. He has performed as soloist and chamber musician in venues throughout the United States and in Europe, Canada, Central America, Taiwan and the Philippine Islands.

In 2008, he recorded the musical examples in the anthology that accompanies the widely used text Music in Theory and Practice. He has served as an adjudicator for piano competitions in 19 states, and is the immediate past President of the Michigan Music Teachers Association.

Pedersen assembled a program for the Victory Vertical Piano Project that includes performances of popular pieces from the time—swing, classical, blues, jazz—that were probably played on these pianos, as well as projected images and a narrative context. Appropriately enough, the Victory Vertical Piano Project was presented for the first time in Alexander Recital Hall on the eve of last Veterans Day.

Since then, Pedersen has taken his show on the road to Detroit, Livonia, Saginaw, Ann Arbor, St. Louis and Dallas, with stops already scheduled for the next academic year at Central Michigan University, Phoenix, Spokane, Wash., and Pensacola, Fla., among others.

Phoenix is on the itinerary because the Musical Instrument Museum there owns a playable Victory Vertical. “They have a beautiful concert hall with a lovely Steinway grand,” he says, “but they’re also going to bring their Victory Vertical on stage and I will have the opportunity to play it and hopefully record a bit for my website.”

His search for a playable Victory Vertical to call his own has been fruitless so far, which isn’t surprising given that the instruments, almost 2,500 of which were manufactured, were regarded as highly disposable.

“There are Steinway dealers all over the country that are looking for one of these pianos for me,” he says. “I actually saw one on Craigslist a year ago and immediately responded, but the ad was taken down by the next day. I don’t know what happened to it. And a woman in Great Britain who found one in China and brought it back to Great Britain and had it rebuilt invited me to come over and play it, but I can’t have it.”

Pedersen originally envisioned a two-year lifespan for the project, but admits he’s been surprised by the number of bookings he’s already landed “without trying very hard.” After all, he says, “I’m self-managed and I have a day job.”

He’s passionate about that, too.

“The thing I love about teaching at Eastern is students here come with the attitude of ‘I don’t know, teach me,’ ” he says. “We don’t get very many students who say ‘prove to me that you have something that I need.’ I love that openness to being turned on by something that they don’t already know. I really get excited when I see those students take off.”