Eastern students from a variety of integrated healthcare specialties participate together in a day of patient simulations and teachable moments at St. Joseph Mercy Ann Arbor Hospital and Rackham facility on the EMU campus. 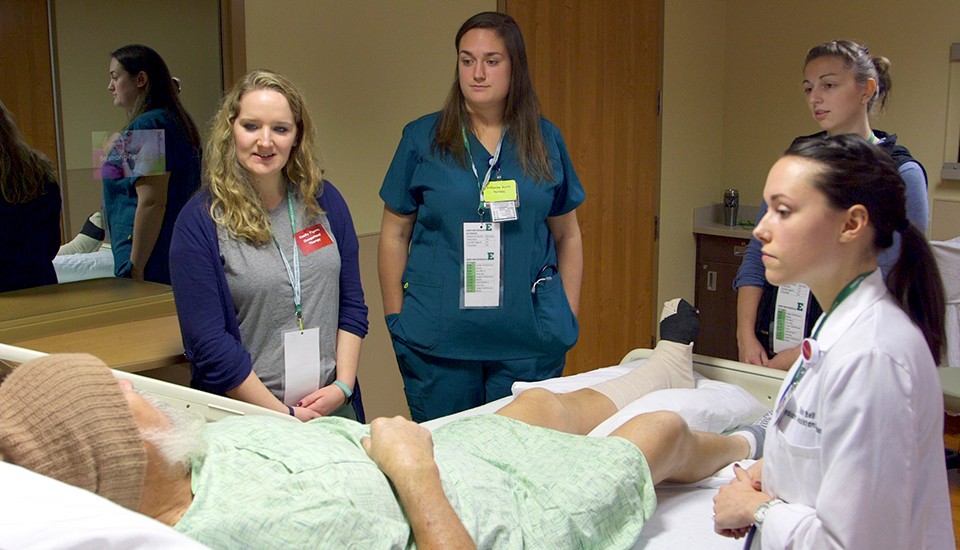 YPSILANTI – Can I get a whiskey?”

The patient was neither cooperative nor very responsive.

He was a homeless man, an alcoholic who lived in a local park and had suffered frostbite, forcing the amputation of his foot, an outcome he had trouble understanding.

A team of three professionals—a dietitian, a nurse and a physician assistant—attempted to communicate and draw him out while assembling a plan to discharge him.

“We’re definitely here to help you,” the nurse said reassuringly. “We’re trying to make it so you can go home again.”

The patient tried to get up out of bed, which at that point would have been disastrous, given the need to first learn to walk on his newly amputated foot. The nurse quickly moved to gently but firmly block his attempt.

The helpful healthcare team seemed young, and for good reason. They were students in graduate health-based programs at Eastern Michigan University, part of dozens of soon-to-be professionals participating in a day of scenario practice and review with simulated patients last year at the Patient Simulation Facility at nearby St. Joseph Mercy Ann Arbor Hospital.

The day’s program, which combines students from a variety of health programs that also include orthotics and prosthetics, occupational therapy, health administration, clinical lab science, athletic training and social work, is part of a powerful emphasis and culture at the EMU College of Health and Human Services (CHHS) on interprofessional education (IPE) – the idea that patients benefit most from integrated care that blends the efforts of professionals from various areas.

“Patient and client needs demand that professionals from many different disciplines work together to provide the best care possible,” says Christine Karshin, associate dean of the college. “Simulation-based education, used in a collaborative practice, is of great value for learners outside their own disciplines. It better prepares students to meet the complexities of today's health care workplace.”

Students take part in morning and afternoon simulations. After reviewing a video of their simulation in small groups, students and faculty gather together in a classroom to share impressions and insights.

Professors Linda Myler and Kathy Seurynck, co-directors of the nursing simulation labs at EMU and organizers of the day’s program along with Jacob Lindquist, a professor of orthotics and prosthetics, lead the discussions.

“Having this day is very, very valuable for (the students) to be able to see what other people do (in such a setting),” Seurynck says. “To talk to other students in their profession – we’re hoping this carries on to their practice.”

Myler noted that the partnership with St. Joe’s and Eastern is distinct because most simulation centers are located primarily at the educational institution.

“This day allows us to get students who have never been there before into the hospital patient care setting,” she said. “This simulation fulfills some of the standards we want to actually give students before they enter their practice. EMU students can set themselves apart by noting they’ve participated in such an interprofessional simulation.”

EMU has undertaken such efforts with the help of a $500,000 estate gift from Donald F.N. Brown, which helped the college establish an Interprofessional Faculty Scholars Conference and other educational activities.

For more on the nature of the event, see the video on last year’s interprofessional education day.