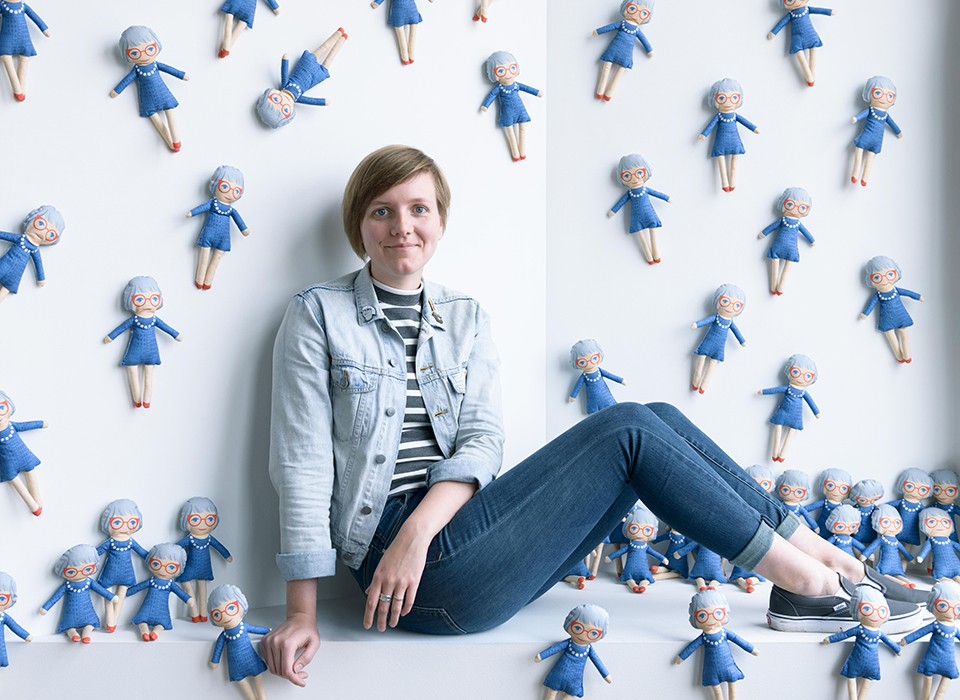 Sarah Marsom makes and sells hand-sewn Jane Jacobs dolls to fund a scholarship for people to attend the annual National Trust conference. Jacobs played a large role in saving Washington Square Park in Greenwich Village from development in the 1960s.

[Editor's note: The following story was first published in the Spring 2019 issue of Revisited, an alumni publication produced by EMU.]

Historic preservation in the United States isn’t exactly new. Activists have been preserving historically significant structures and places since the 1930s. The federal government began designating historic districts in the 1960s. EMU launched its highly regarded Historic Preservation program—one of the largest graduate programs of its kind in the nation—in 1979.

While protecting historic assets remains a challenge (the National Trust for Historic Preservation issues an annual list of “most endangered historic places”), several generations of preservationists have successfully saved thousands of buildings and places nationwide from decay and destruction.

Today, recent graduates of academic-based historic preservation programs are infusing the field with new energy. And Sarah Marsom (MS13) is one of its leaders.

“I love how historic sites can bring history and the ephemeral to life,” says Marsom, 29, who works as an independent historic resource consultant in Columbus, Ohio. “They create a visual narrative that resonates at a much higher level than reading a book.”

Marsom inspires others to protect elements of the past for future generations through engaging and inclusive activities.

Recognizing her professional and volunteer work, in 2018 the National Trust for Historic Preservation named Marsom the recipient of the American Express Aspire Award and an honoree on its inaugural 40 Under 40: People Saving Places list.

“Sarah is a nationally respected, rapidly rising star in the field and one of our most accomplished alumni,” says Ted Ligibel, director emeritus of EMU’s Historic Preservation Program. “Her work has helped reinvigorate the movement among a whole new generation of preservationists.”

Marsom’s appreciation for all things historic began with a love for National Park Service sites while growing up in North Carolina. That led to a degree in Parks and Recreation Management from Northern Arizona University. During an internship at the Riordan Mansion State Historic Park in Flagstaff, Marsom developed an interest in historic preservation.

“It’s a gorgeous park and the mansion is a great example of early Arts and Crafts architecture,” Marsom says. “The National Park Service acts as caretaker for our natural and cultural resources. It also manages the National Trust for Historic Preservation and developed the standards that guide preservation work at the national, state and local levels.”

Marsom explored her options for a graduate degree in historic preservation and enrolled at EMU in 2011.

“Almost every course in Eastern’s program provides an opportunity to work with a historic site or history museum,” Marsom says. “Eastern also offers a breadth of courses taught by professors who understand wide aspects of the field.”

While at EMU, Marsom created summer educational workshops and an architectural tour as an intern at Fair Lane—the Henry Ford Estate in Dearborn. She also completed a research assistant graduate fellowship at the River Raisin National Battlefield Park. During an internship with the Michigan Department of Transportation, she surveyed and identified properties eligible for protection under the National Register of Historic Places.

Since earning her master’s degree in 2013, Marsom has been an ambassador for Eastern’s program.

“I loved the variety of courses, particularly vernacular architecture,” she says. “I formed close friendships with a wonderful network of peers. Thanks to my professors’ connections, I had incredibly valuable internships.

“I also fell in love with the Midwest, which is an overlooked region for historic assets. People who move to the region and enroll in a program like Eastern’s will find many opportunities for becoming community leaders and making a great impact.”

Marsom lives in a modest 1920s bungalow in Columbus’ Eastmoor neighborhood. She worked for nearly two years as a historic preservation advocate for the German Village Society. After a stint working for a preservation consulting firm, she launched her own consulting business in August 2017.

Besides helping developers integrate preservation techniques in their projects and pursue state historic tax credits, Marsom specializes in heritage interpretation—telling stories of the past through exhibit labels, tours and hands-on workshops.

“I want to make preservation interdisciplinary and dynamic,” she says. “I’ve been sewing since age 5 and leveraged that at a recent conference in Phoenix. I led a pillow sewing workshop using a pattern inspired by the Mid-Century Modern movement. This activity tells the story of the influence women had on the movement.”

“The Jacobs doll helps start conversations about historic preservation and community planning,” Marsom says. “I introduced it at a conference in 2016. As it became more popular, I started selling them online through the Tiny Activist Project. Proceeds fund a scholarship to help people attend the annual National Trust conference.”

Marsom has sold about 250 dolls to people in more than 30 states and 10 countries. Sales have helped 10 people attend the conference to date.

“I’m passionate about leading the future of preservation through outreach activities engaging children and young adults,” she says. “To understand the present, we need to understand the past. If we can impart that to people at a young age, we can help them become a force for the future of their communities.”

With Marsom as a leader, it seems the preservation movement is poised to flourish for yet another generation.