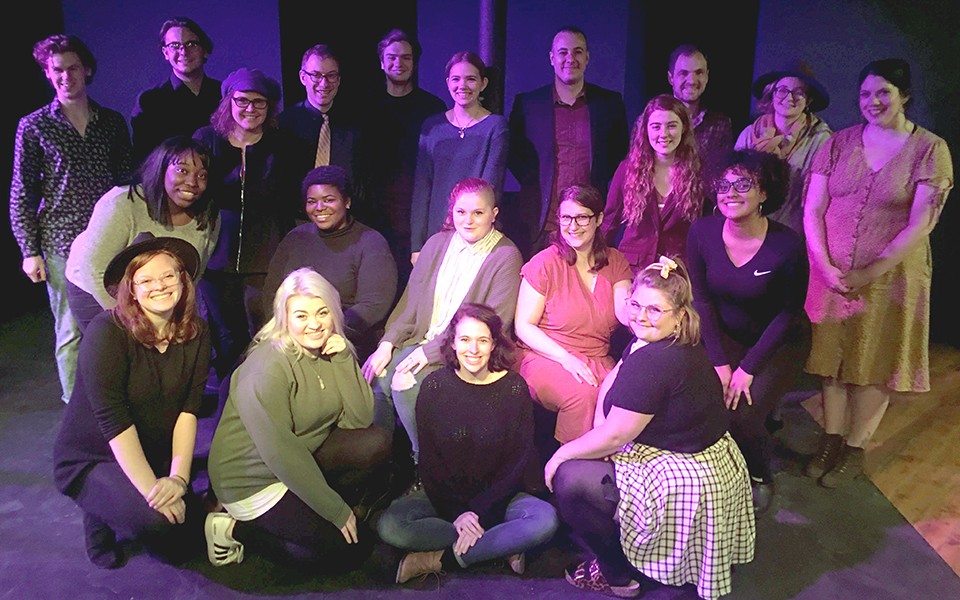 YPSILANTI - The spotlight shone on 17 EMU students and alumni who were selected to debut new plays for Theatre Nova’s annual Michigan Playwrights Festival.

These students participated as directors and actors in the 2019 season of the festival, which took place on Oct. 23 through 27 at Ann Arbor’s Theatre Nova.

The festival serves as an opportunity for Michigan playwrights to debut their works in the form of either full-length or 10-minute staged readings. Staged readings are dressed-down performances with no set or costumes and minimal props and movement.

EMU students Tyler Calhoun, Nathalie Estiverne and Celah Convis had the opportunity to direct staged readings for the 2019 festival, and they spoke about how this opportunity was significant for them.

What was it like to participate in a staged reading compared to more traditional theater experiences?

Tyler Calhoun, second year MA candidate in Interpretation & Performance Studies, director of the full-length staged reading “The Lion’s Share” by Catherine Zudak - “I had never done a staged reading before! It was quite the challenge. Staged readings are different from a full performance because it is literally your cast sitting on chairs behind music stands with their scripts. Staged readings are meant to help develop new plays, so the focus is on the story and characters, not the production and spectacle. You really have to break that script down and figure out what is driving it to make sure that your actors are armed and ready to give that script the reading it deserves.”

What drew you to this opportunity?

Nathalie Estiverne, double major in Communication and Theatre Arts, director of the 10-minute staged reading “The Garden and Back” by Aliyah Rose Kiesler & Haley J. Cook - “What drew me to this opportunity was that I got to bring life to a playwright’s work. Many of these pieces haven’t been produced before and I got the opportunity to be a part of their beginning stages.”

Tyler Calhoun - “Funny enough, I had posted a status on Facebook about having the opportunity to direct a show in Tipping Point Theatre's Sandbox Festival. I made a comment about the difficulties I was having finding opportunities to direct theatre in Michigan, and later that day I received an email from Diane Hill, the Producing Artistic Director at Theatre Nova in Ann Arbor. She said that she saw my status and saw my interest in directing and offered me an opportunity to direct a staged reading of a full-length play in their Michigan Playwrights Festival.”

What was the process of preparing for the festival like?

Celah Convis, sophomore in the Theatre Arts program, director of the 10-minute staged reading “Can We Talk?” by H (V. Holman) - “After choosing the script I would work with, I met with the playwright to discuss the script, and we worked together on the casting process. My cast rehearsed our script in a sort of guerrilla style - in spare lobbies, classrooms, anywhere we could find a space.”

How was this opportunity significant for you?

Celah Convis - “As someone who usually acts, working as a director challenged me to take a different view of the dramatic text. I had to understand every character, not just one, and I had to have a visual concept for how the show could best play out. Directing stretches you to communicate, plan ahead, exercise parts of your imagination you may not be used to using, and have the courage to put your ideas, however imperfect you fear they may be, onstage for people to see. And in the end, it was incredibly rewarding to see our show open to a sold-out audience at Theatre Nova.”

The following EMU students and alumni participated in plays for the Michigan Playwrights Festival’s 2019 season: