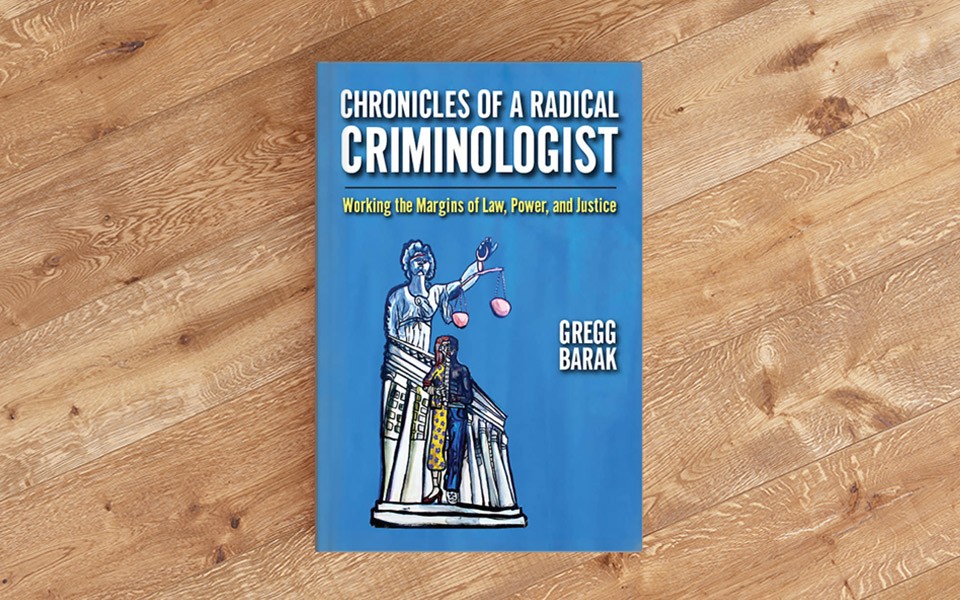 YPSILANTI – Eastern Michigan University professor Gregg Barak has spent a career educating students and the world community about the consequences of unchecked corporate power, both through his classroom work and myriad writings.

He has now blended his broad perspective with a personal narrative in the publishing this spring of his latest book, “Chronicles of a Radical Criminologist: Working the Margins of Law, Power, and Justice,” by the Rutgers University Press.

Barak, who began at EMU in 1991 and earned his bachelor’s, master’s and doctorate at Cal-Berkeley, teaches criminology and criminal Justice at EMU. He has published widely on those subjects.

Before this spring, his most recent book was “Unchecked Corporate Power: Why the Crimes of Multinational Corporations are Routinized Away and What We Can Do about It,” published in 2017.

Over the past quarter century, he has become a global criminologist, with published articles in Portuguese, Spanish, and Serbian.

“A lot of people talk about globalization in their specialties, but I’ve made particular and extensive efforts to ‘walk the walk’ and take my work global, such a vital step in our interconnected world,” Barak says.

In 2003 Barak became the 27th Fellow of the Academy of Criminal Justice Sciences, and in 2007 he received the Lifetime Achievement Award from the American Society of Criminology’s Division of Critical Criminology and Social Justice.

Barak’s publishers note that his new book, while remaining scholarly in its intent, departs from the typical academic format.

“The book is a first-person account that examines the linkages between (Barak’s) experiences as a criminologist from the late 1960s to the present, and the emergence and evolution of radical criminology as a challenge to developments in mainstream criminology,” the publisher says.

The book focuses on the story of how resisting the crimes of the powerful while struggling locally for social justice is the essence of critical criminology as it traces Barak’s academic career, including stops in Berkeley, Las Vegas, Chicago and, of course, Ypsilanti.

• Overcome laws against abortion and homosexuality.

• Oppose racism and classism in the criminal justice system;

• Confront the policies of mass incarceration and the treatment of juvenile offenders.

Reviews of the book cite the effectiveness of Barak’s personal narrative in conveying larger messages about society:

“In this candid and thought-provoking account, Barak takes the reader on a captivating journey that begins with his critical roots in the renowned Berkeley School of Criminology,” wrote Kristy Holdfreter, editor-in-chief of the Feminist Criminology journal. “By detailing his many travels, tribulations, and triumphs as a respected scholar, university administrator, community activist, political candidate, and frequent newsmaker, Barak’s rich narrative conveys an enduring message: challenging the power elite, combatting inequality, and promoting social justice are all battles worth fighting.”

“it is also a call to action, as well as a blueprint for praxis-oriented teaching and scholarship,” Brisman wrote. “Gregg Barak accomplishes all of this in a book written so lucidly that it could be read at the beach – which I did!”