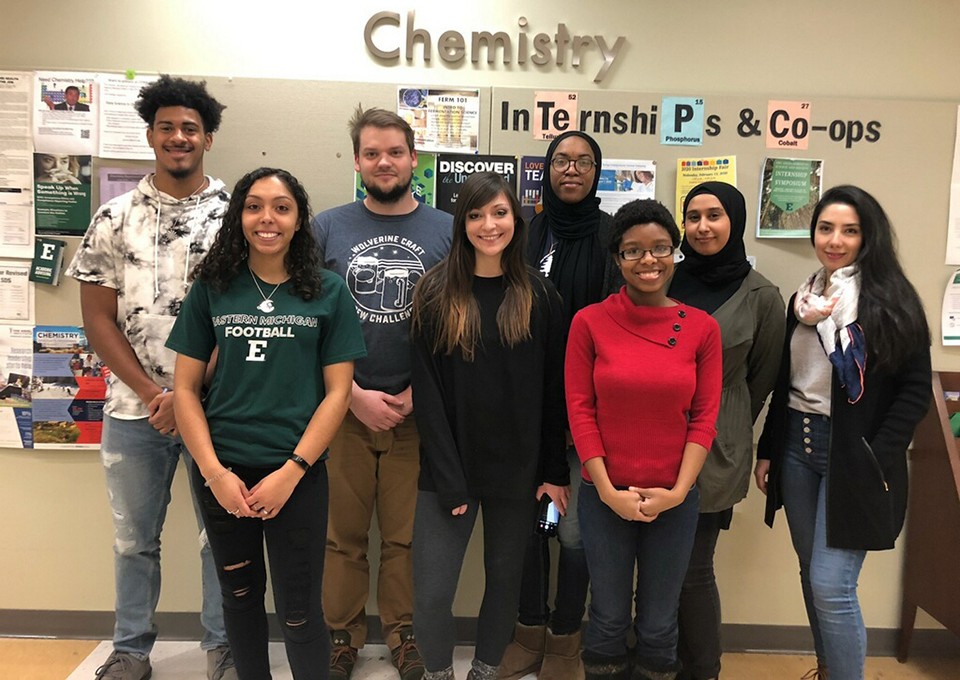 YPSILANTI – A group of Eastern Michigan University students have teamed up with faculty members from the Department of Chemistry this past year in an interdisciplinary research effort that focuses on exploring the interactions of several chemical players, mainly proteins and carbohydrates, attempting to further unravel their role in various diseases such as depression, Alzheimer's and cancer.

The collaboration has resulted in a variety of outcomes showcasing student work, including three papers recently published in professional journals.

The three pieces are:

• “Biochemical determinants of the IGFBP-3-hyaluronan interaction.”

• “Humanin blocks aggregation of amyloid beta induced by acetylcholinesterase, an effect abolished in the present of IGFBP-3.”

• “IGFBP-3 Blocks Hyaluronan-CD44 Signaling, Leading to Increased Acetylcholinesterase Levels in A549 Cell Media and Apoptosis in a p53-Dependent Manner.”

“The pieces generally focus on investigating molecular players involved in cellular crosstalk between neurodegeneration and cancer,” said Hedeel Evans, a professor of chemistry and lead on the collaborative project. “They focus on deciphering the distinct or shared roles of these overlapping molecular players, their underlying mechanisms, and functional pathways used, which will assist and provide insight into the development of new therapeutics for both cancer and neurodegenerative diseases.”

Evans, Heyl-Clegg, and Guthrie teamed up several years ago to offer students a diverse research experience that encompasses aspects such as peptide design, synthesis and purification, along with cell culture/viability assays that determine effect on living cells.

“Each professor offers specific expertise that complements the others in this model that illustrates the teamwork that is becoming increasingly important in complex scientific research,” Heyl-Clegg said in describing the collaboration. “Student researchers are co-mentored, and they rotate through the three labs to gain a fuller experience than they would in working with just one.

“They receive specific training and oversight that allows them to learn diverse techniques in organic, analytical, and biochemistry, and to carry a project through from beginning to end.”

Nine EMU undergraduates and ten Master’s level students have been involved in the projects thus far, leading to a number of them being named as coauthors on the publications. A numbers of these students also have presented their work outside of EMU at professional conferences.

The three papers include a variety student coauthors from different academic departments:

• Deanna Price, an EMU master’s student in biology who is doing her research in the Chemistry Department due to the interdisciplinary nature of the project.  Price was one of the first B.S. graduates from EMU’s interdisciplinary program in Neuroscience.

• Alexis Stephens, an EMU undergraduate in the Neuroscience Program.

• Asana Williams, majoring in chemistry and human biology at EMU.

• Sadaf Dorandish, an EMU graduate student in chemistry after earning a B.S. in biochemistry.

• Robert Muterspaugh, who earned his M.S. in chemistry at Eastern and is now in medical school at Central Michigan University.

• Brandon Iwaniec: A former EMU graduate student in chemistry now pursuing a doctorate in biochemistry at The Ohio State University.

• Bradley Clegg, a former summer research student at EMU and 2020 graduate of Kenyon College, now a Ph.D. student in chemical biology at the University of Michigan.

Evans recently received a $445,500 National Institutes of Health grant to expand the work, in a project that involves probing the role of “Insulin-Like Growth Factor-Binding Protein 3 and Humanin in Regulating Hyaluronan Function.”

“The team hopes to involve many more students in this exciting scientific project in the future,” Evans said.

Eastern Michigan University announces first-round winners of the “Get the VAX to WIN” program.