Signs of extensive #EMUSafe plan campus preparations abound as conscientious Student Ambassadors work at check-in stations at various buildings, and the shows go on at WEMU 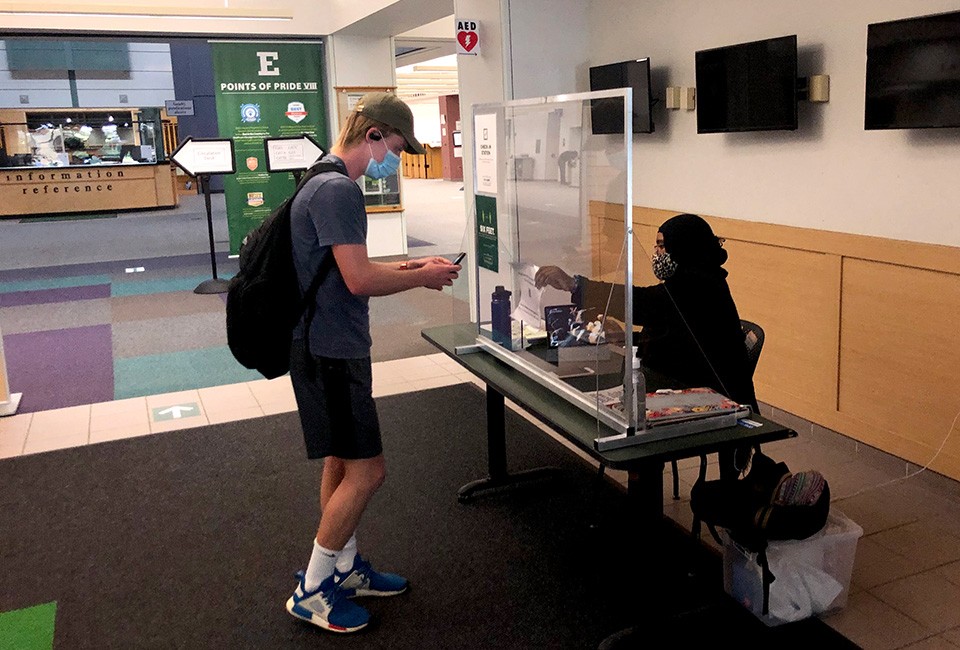 You only had to drive onto campus to tell this was no ordinary first day of school at Eastern Michigan University.

Normally, on this opening day of the fall semester, cars flood the Oakwood Parking Lot by the Science Complex, with roaming drivers trolling for a spot when someone else vacates. Yet on this day, barely a dozen cars dotted the lot at 9 a.m.

The beautiful, 800-acre campus, normally teeming with students searching out their classrooms and feeling the exciting call of fall, sat quiet and peaceful under the late summer morning sun.

The few students and staff members who had reasons to walk the campus wore a face covering, the product of an intensive summer of campus education with the #EMUSafe plan to cope with the COVID-19 pandemic.

Indications of that unprecedented, collaborative effort were everywhere. Signage indicating safe practices, where to enter and exit buildings and paths to walk to ensure physical distancing. Even the basketball hoops had been removed from the courts by the Student Center.

And, at each building, check-in tables where Student Ambassadors made sure that those entering the building had completed the COVID-19 check off indicating you don’t have any symptoms or circumstances that might indicate infection.

On this day, not every building’s check-in table was staffed; just those buildings that would receive traffic during a time when nearly all classes are being taught online. That included Halle Library, The Student Center, the Rackham Building and The Eastern Eateries.

The Student Ambassadors included supervisor Brad Pappas, a senior majoring in professional writing. Pappas walked around campus checking on the check-in stations, ensuring they were staffed and things were going well with the daily survey.

“It sure is unique,” Pappas said of the surreal time on campus, which involves delaying campus residence hall move-in by three weeks. “It’s frustrating but understandable.”

At the Rackham Building, Shreya Ranbhise, a masters student in clinical research, was beginning her first day on the job as a Student Ambassador, checking in students and staff at a health-based building where several of the few face to face classes would take place.  “It’s important to be here (and make sure the screening process is followed),” she said.

At Halle Library, Student Ambassador Jessica Ingram reported that the dozen or so people she’d checked in were cooperating and following the process. Ingram, a senior majoring in children and families, had responded to an email soliciting applicants for the ambassador jobs and “thought it would be a good gig – helping ensure that everyone stays safe.”

Among those she checked in was Edward Zuercher, a junior majoring in mechanical engineering. At Ingram’s request, Zuercher completed the survey of questions and submitted his answers, indicating he was OK to enter the library and be on campus. Why was he here, even though he didn’t have a face to face class?

“I live off campus,” he explained. “It’s easier to study in this environment.”

At the Student Center, I was checked in to enter by Student Ambassador Jihoon Lee, a graduate student studying accounting, who ensured I had received the email verifying I’d completed the survey earlier that morning.

By the Lakehouse, EMU freshmen varsity rowers Abbey Simpson and Alexandria Parsons enjoyed an ample breakfast of scrambled eggs, sausage and toast from the Eastern Eateries. The two had arrived earlier that month to live on campus along with other student athletes and readily agreed it had already been a unique but still exciting experience.

“It’s been a ride, to say the least,” Simpson said.

Parsons noted the importance of having people to reach out to during such a time, and that athletes such as rowers have a ready-made social structure. “It’s great to have that group,” she said. “People are reaching out on social media.”

At the Eateries, Bob Greca, EMU’s director of concessions, pointed out a variety of open carry and go eating spots, including “Create,” where staffers will prepare you a salad, “Cluck,” the Eateries store and Starbucks.

And at WEMU, on the top floor of King Hall, a masked Jeremy Baldwin manned the microphone during the 10 a.m. 89.1 Jazz Morning show after News Director David Fair had done his usual Morning Edition show starting at 5 a.m.

While campus suddenly grew quiet starting last March and throughout the summer, WEMU has remained a crucial and vibrant voice, conveying the national and local news daily about the pandemic.

Station manager Molly Motherwell has been one of the few campus employees who worked (with face covering as appropriate) in the office all summer; managing a radio station’s all-day programming and various staff can’t easily be done remotely.