Nationally renowned reporter acknowledges we are living in extraordinarily tough times, but draws on Dr. King’s perspective in sounding hopeful notes for America 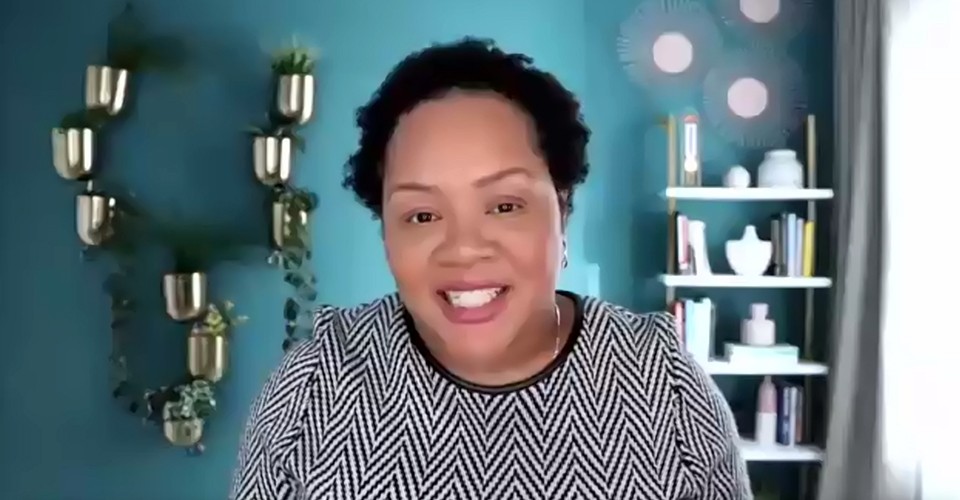 YPSILANTI – With the stark challenges America faces right now, how can one person make a difference, how can one be of help?

Alcindor noted the advice of beloved and legendary Georgia Congressman John Lewis, who died in 2020. Lewis said that “Ordinary people can get into good trouble” in order to help advance justice.

“Journalism is my good trouble,” Alcindor said. “I implore you to find your good trouble.”

Her advice resonated with the students, faculty, staff and community members looking on virtually during the talk, the centerpiece of this year’s MLK Celebration, which carried the theme: “We the People Speak: No Justice, No Peace.”

EMU and The Charles H. Wright Museum of African American History in Detroit (which Alcindor strongly recommended visiting) collaborated in staging the keynote.

“How can individual people make change?” Alcindor asked, and then began counting the ways. “Just look at your talents.”

You can start a club, or, as a student in college, you can mentor people in your hometown, Alcindor said, urging students to be true to themselves, and to never let anybody call you by a nickname.

Alcindor noted the famous quote of Dr. King, in which he says that the arc of the moral universe is long, but that it bends towards justice. “Each of us is bending it (in our own way),” she said. “We are each are using our resources. Journalism is my way of bending the arc …

“I wanted to be a professional witness to the struggles against white supremacy. It’s up to all of us to use our God given talents in any way we can … Democracy is fragile. We must all do our parts to protect it.”

Among Alcindor’s other insights and perspectives:

Alcindor said she came to her speech with a heavy heart, given the threat of white supremacy so vividly demonstrated during the Jan. 6 insurrection at the nation’s Capitol.

“The threat of white supremacy courses through the halls of Congress,” she said. “All of this seems so scary.”

Yet Alcindor takes comfort in a quote from Dr. King, in which he says that, “The nation is sick. Trouble is in the land; confusion all around … But I know, somehow, that only when it is dark can you see the stars.”

Her father originally wanted her to be a lawyer, but Alcindor persisted in her goal to become a journalist, working at internships with The Miami Herald, The Seattle Times and The Washington Post.

During a stint with USA TODAY, she wrote about the killing of Trayvon Martin and covered the Ferguson uprisings in real time. As a reporter, she was shocked to be in the middle of such chaos, but, noting that so many people are silent in the name of being comfortable and safe, she chose to be a powerful voice for good.

Alcindor says she has focused on asking the necessary, tough questions while not letting her opinion color her reporting, leaving that area of expression to TV hosts, pundits and columnists.

She likened actions during the tenure of the 45th president to a reality TV series, with many staged events. Throughout, and influenced by those journalists and pioneers of justice who came before her, Alcindor says she continued to dig into the key issues of racism and justice, which are manifested in areas such as unequal access to healthcare and education.

Among the tough questions she asked President Trump was when Alcindor noted that on the campaign trail he had called himself a nationalist. Could such a personal label embolden white nationalists, she asked. The President labeled the question as racist.

“I focused on my purpose,” Alcindor said of the exchange. “My ancestors came here so I could pose that question.”

Another example came when President Trump said he’s done more for Black people than any other president. Alcindor says her response was to give people the information they needed to adequately answer that question for themselves, and not simply offer her opinion.

On what Dr. King would say today

“When I think about Martin Luther King and all that he gave this country, he would want society challenging itself, looking bluntly at itself,” Alcindor said, adding that he would ask, “Where in your life are you fighting white supremacy?”

King’s reaction to the events of 2020 would be a mix of pride and profound disappointment, Alcindor said.

He would be happy the country has come far in terms of widening freedoms to vote, but it would break his heart to see the country so divided, with African Americans two to three times more likely to die by a police shooting and the COVID-19 virus, Alcindor said, adding that,“It’s sad and shocking, and a reminder of how far we have to go.”

What she would ask Dr. King were he alive today

“Why do you keep doing this, risking your own personal safety and comfort?” Alcindor said. “How did you go on? How did you find the courage to wake up each day?”

Alcindor noted that Dr. King focused on far more than racism. He sought help for workers and focused on economics policy, the Vietnam War and many other issues.

In concluding her appearance, Alcindor acknowledged that “The last couple of years have been tough, really tough,” adding that her goal has been to “highlight what is at stake in our democracy.”

She added a final reminder to viewers of the talk to find “your good trouble.”

“There are going to be times where you run into people who question your decisions,” she said, “You need to just be ready to push back.”

She is the daughter of Haitian immigrants, and has written extensively on the intersection of race and politics. She has covered the impact of President Trump’s policies on the working-class, immigration, and breaking news coming out of the Middle East and Asia.  Alcindor was the recipient of the 2020 White House Correspondents’ Association’s Aldo Beckman Award, presented to a journalist who demonstrates “overall excellence.” This recognition was historic, as she became the first public media reporter and first Black woman to win the award since its creation in the early 1980s. She earned a master’s degree in broadcast news and documentary filmmaking from New York University and a bachelor’s in English, government and African American studies from Georgetown University.