Eunice Jeffries, elected as chair of Eastern Michigan University Board of Regents, will lead a diverse and distinguished governing group with deep experience in a wide variety of professional disciplines and public service 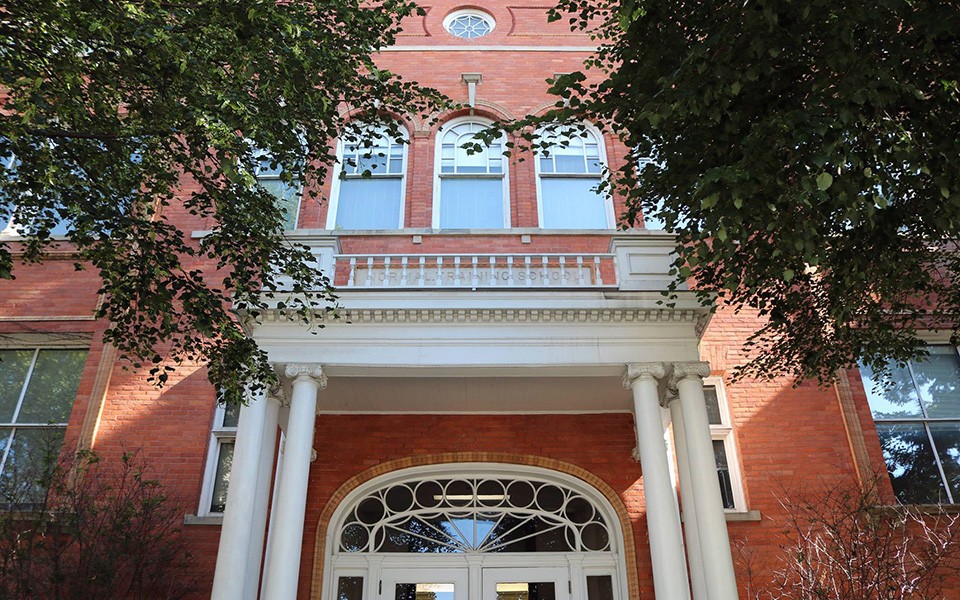 YPSILANTI – Eunice Jeffries, who has enjoyed a highly distinguished career in public service, has been appointed chair of the Eastern Michigan University Board of Regents. As Board Chair, she will lead a diverse group of Regents with broad experience in business, higher education, law, medicine and public health, entrepreneurship and state government. The group includes four Eastern Michigan University alumni and four African Americans.

Jeffries, the first African American woman to chair the EMU Board of Regents, was elected to a two-year term as chair Thursday, Dec. 10 during the board’s regularly scheduled meeting. Michigan Governor Rick Snyder appointed Jeffries to the EMU Board in December of 2016 for a term expiring December 31, 2024.

Regent Michael Hawks, an Ypsilanti native, EMU alumnus, and a highly respected Lansing lobbyist with deep insight into state politics, was elected as vice chair, also for a two-year term.

Hawks was appointed to the Board by Governor Snyder in February 2011. He was reappointed for a second term expiring Dec. 31, 2026.

He was born in Ann Arbor and grew up in Ypsilanti Township. He graduated from Ypsilanti High School, where he excelled in football and received a full athletic scholarship from Eastern Michigan. Hawks, a four-year letter winner, was a starter on defense for three seasons. While at EMU, he earned a bachelor's in business administration and subsequently earned a master's in higher education administration from Michigan State University.

After completing his higher education, he served as Chief of Staff for the Majority Floor Leader in the Michigan House of Representatives and served on the Staff of the Speaker of the House.

He currently serves as CEO of Governmental Consultant Services Inc. (GCSI) in Lansing, Michigan. GCSI is a bi-partisan multi-client lobbying firm that is consistently recognized as Michigan's number one rated firm. GCSI’s diverse and prestigious portfolio includes many Fortune 500 companies, multi-national corporations, trade associations, municipalities, non-profits, authorities as well as many other entities in multiple sectors. Hawks has been consistently voted among the top lobbyists in the state. He also has been involved with many charitable and community organizations over the years.

Jeffries and Hawks will work with a governing board that brings a wide variety of perspectives and professional experience to its oversight of the University. The other five EMU regents include three veteran board members and two new appointees.

Dennis Beagen has a distinguished history at Eastern, combining a variety of academic, administrative and service roles as an outstanding advocate for EMU students. Beagen was appointed to the board by Governor Snyder in December of 2014 for a term expiring December 2022. He was previously appointed by Governor Snyder to the Michigan Gaming Control Board in 2012 – an appointment he held for two years before being named to the EMU Board.

He was born and raised in Detroit. Upon graduation from high school in 1963, he enrolled at EMU, and received his undergraduate degree from EMU in three years while majoring in speech-communication with a minor in business management. After receiving his bachelor’s degree from EMU, he was admitted to graduate school at the University of Michigan while serving as a graduate teaching assistant at EMU.

While serving as graduate teaching assistant in the Department of Speech and Dramatic Arts, Beagen volunteered to coach EMU students competing in intercollegiate forensics and debate. After completing his Master’s at U-M in the summer of 1967, he was hired at EMU as a full-time instructor of speech, and assistant coach for the EMU Forensic/Debate team. He then enrolled at Wayne State University, and completed all course work for his doctoral program.

In 1970, Beagen was appointed director of the EMU Forensic program. A position he held until 1981. During his tenure as director of forensics, EMU students achieved a total of eight national team championships, four top speaker in the nation titles, and 27 individual national championships.

In the summer of 1981, he was appointed administrative head of the Department of Communication, Media and Theatre Arts. He served in that role for more than three decades. During his tenure as department head for CMTA, Beagen also was appointed to interim administrative positions as Associate Provost for Academic Affairs and Dean of Continuing Education.

Beagen was also appointed to numerous special assignments and task forces at EMU, including numerous EMU negotiating teams (faculty, professional technical and clerical); chair of the 2005 President Search Committee; special assistant to the Provost for the Campaign for Scholars and chair of the Planning Committee for EMU's prestigious Undergraduate Research Symposium.

After more than 45 years of service, Beagen was granted emeritus faculty/administrative status from the Department of Communication, Media and Theatre Arts.

Michelle Crumm is known throughout Michigan for her acumen, entrepreneurial talent and leadership in numerous business and public service settings. She was appointed to the Board by Governor Snyder in December of 2014 for a term expiring December 2022.

Crumm earned a Bachelor of Science degree in accounting from Purdue University and her Master’s of Business Administration from the University of Michigan.

Early on, Crumm served as an accountant at an automotive supplier and auditor at Plante and Morgan, later obtaining her license as a Certified Public Accountant. Following this, Crumm spent nearly five years at Kellogg Company.

In this position, Crumm's leadership was proven instrumental in helping the fuel cell company transition from start-up to second stage. Making Adaptive Materials a fast growing, advanced manufacturing company and into a successful fuel cell manufacturing company. Adaptive Materials, Inc. was later acquired by defense industry giant Ultra Electronics in 2011. Since that time, Crumm has actively participated in many other start-ups as an investor and currently has ownership in many local companies.

Crumm has been widely recognized for her leadership. She was named "Executive of the Year" from Ann Arbor.com, "Most Influential Women" by Crain's Detroit Business, and one of Enterprising Women's "Women of the Year." Ernst and Young also awarded her the prestigious title “Entrepreneur of the Year”.

At this time, Crumm serves as Founder/CEO of Present Value executive coaching company. She is known for her energy, serial entrepreneur, and accomplishments in helping leadership teams develop and implement strategy.

As a dynamic community participant, Crumm served on the Board of the Center for Entrepreneurship at the University of Michigan and is the former Chair of the Ann Arbor Area Community Foundation.

Alexander Simpson, an EMU alumnus and widely respected lawyer with strong public service, was appointed to the Board in 2016 by Governor Snyder for a term expiring December 31, 2024

Simpson received his Bachelor of Science in Social Work from Eastern Michigan University in 2007. At EMU, he was a member of the Delta Nu chapter of Kappa Alpha Psi Fraternity Inc., presented at the Undergraduate Symposium, was a member of the Community Creed Task Force, served as a New Student Orientation Assistant, was a writer for the Eastern Echo, helped start the Student Conflict Resolution Center, won Homecoming King and, most importantly – met his wife, Danielle.

After graduation from EMU, he matriculated on and received his Master of Social Work from the University of Michigan, School of Social Work in 2008, and his Doctor of Jurisprudence from Indiana University, Maurer School of Law in 2011. While in law school, he co-founded the Indiana Journal of Law and Social Equality. He received a Master of Business Administration from Northwestern University, Kellogg School of Management in 2017.

Simpson began his legal career at Bodman PLC, a law firm that has been in Michigan since 1929. Bodman PLC provides counsel to companies and businesses. After participating in the firm’s summer associate program, he worked as an associate attorney in the firm’s Enterprise Procurement, Business, and Intellectual Property practice groups. In 2015, Simpson joined IHS Markit Ltd. as Legal Counsel and currently is a member of Corporate Counsel at Meijer Corporation.

Currently he works as an attorney for Microsoft.

Nathan K. Ford, of Detroit, was appointed to the Board this past December by Governor Gretchen Whitmer for a term expiring Dec. 31, 2028. Ford is the associate vice president and director of public engagement for HNTB Corporation. He is a member of the Conference of Minority Transportation Officials (COMTO) Michigan Board and vice president of the Morehouse College Alumni Association Detroit Chapter. He holds a Bachelor of Arts in Business Administration from Morehouse College.

Jessie Kimbrough Marshall, M.D., M.P.H., of Grosse Pointe Farms, was appointed by Governor Whitmer for a term to expire Dec. 31, 2028. She currently volunteers at community mobile clinics with COVID-19 testing and flu vaccinations in several counties in Michigan. Dr. Kimbrough Marshall previously served as the medical director for the Washtenaw County Health Department and as a practicing clinical assistant professor at the University of Michigan Medical School.

The EMU Board of Regents has one vacancy, created by the resignation of Rich Baird in January. Governor Whitmer is expected to appoint a replacement this winter.

More information about the Eastern Michigan University Board of Regents, including committee assignments and meetings schedule, can be found on the Board of Regents website. 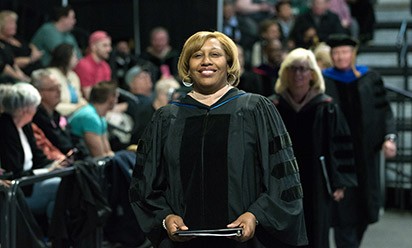 A new era of volunteer leadership is emerging at Eastern