“Look, here’s the deal.” Eastern Michigan University graduate student takes a compelling look at a loaded word in politics and other contexts 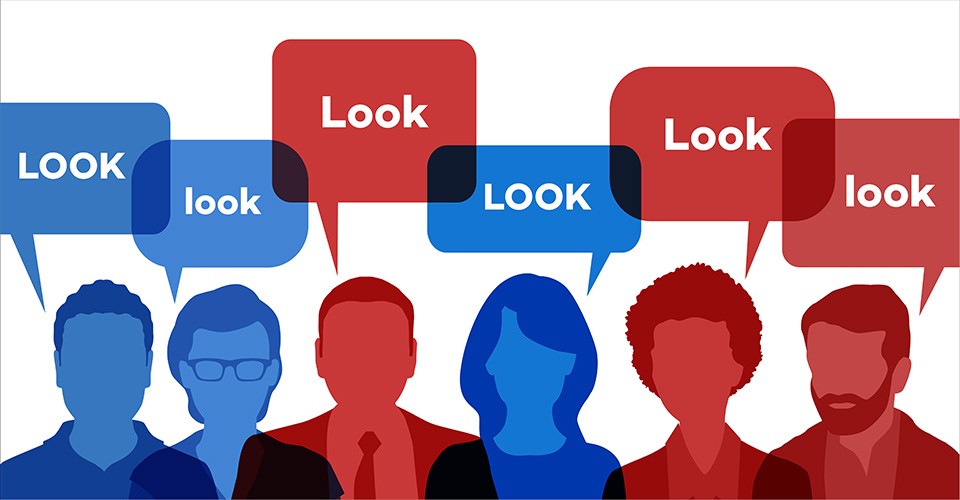 YPSILANTI – “Look here’s the deal. Every day, we make life changing decisions based on what we hear.”

“One person’s words can change the course of history.”

“One word, in this case ‘look,’ can shift your perspective imperceptibly.”

“Look. One word can change the way you see the world, and I hope I just did.”

Such fresh thoughts come briskly and pack a crisp punch of clarity, part of L’Meese Greaney’s three-minute oral summation of her master’s thesis, an effort that finished in the top eight in the Midwestern Association of Graduate Schools competition and was warmly received during an April 22 presentation in the Educational Policies Committee meeting of the Eastern Michigan University Board of Regents. The project was also showcased in this year’s Graduate Research Conference at EMU.

Greaney, a master’s student in English Linguistics at EMU, did her research for a thesis entitled “On the Syntactic and Pragmatic Interpretation of the Imperative Discourse Marker ‘Look, here’s the deal.’” Her oral summation of the thesis was also judged as the best such effort by an Eastern graduate student this academic year.

Her research explored when, where, how, and by whom the IDM “look” is used in presidential and vice-presidential debates from 2008-2020, from both syntactic and practical perspectives.

One of Greaney’s early results showed that, within the corpus, men and Democrats use the IDM “look” at higher rates than women and Republicans, respectively, suggesting intricate social patterns in the usage of this word.

Her research explores complexities that political affiliation and gender, history, syntax and other variables inject into the word’s usage, with the goal of understanding its use in and impact on discourse in and outside of the political sphere.

Greaney, who lives in Ann Arbor and did her undergraduate studies at Indiana University Purdue University Indianapolis, (IUPUI), discussed her research with EMU Today in a question and answer format.

Question: How did you decide on this topic?

Answer: Listening to the radio while driving to work a few years ago, I noticed what I thought to be a trend in male Republican politicians' responses to direct questions from interviewers’ questions on NPR. When asked a question whose answer might negatively impact the interviewee's political position and/or create a negative soundbite, the interviewee(s) seemed to often begin their reply with “Look, ...", which I thought was quite curious.

Later, I heard NPR’s Cokie Roberts use “look” and, as a news reporter on a left-leaning news show, her profile and motivations for using “look” stood in contrast to my previously held notions of how and why the word was used. I never thought I'd wind up researching or exploring what I casually noticed on my commute, but the interplay between language and authority is of great interest to me.

As I brainstormed potential research topics with my advisor (linguistics associate professor Eric Acton), I was drawn to political discourse and discourse manipulation. It was fortuitous that my interests aligned with an existing curiosity surrounding the word “look” and thus the germ of my research was born.

Q: Were there some surprises you learned in your research?

A: Within the niche setting of presidential and vice-presidential debates from 2008-2020, many of my hunches about who uses “look,” when, and how they use it were confirmed.

However, the patterns I thought I was observing are much more complex than initially suspected. The usage of “look” is not limited to men and certainly is not restricted to Republicans. While our curiosities and intuitions can certainly motivate research, in order to develop a strong understanding of what's actually happening, we have to dig into usage data.

The data showed that while some of my intuitions were right, they were not complete and a few were simply incorrect. I suspected the male politicians in the corpus would use it more frequently than women – and they did, but women still employed the word. I thought that Republicans would have used the word more but, in an apples-to-apples comparison, Democrats actually used it more frequently.

My intuition was that “look” was most often used to shift topics away from the prior content, and that was, indeed, the most common form used in the data set. Although I suspected some of these trends, I was surprised by others. I thought that men would use “look” more frequently when the prior speaker was a woman - and they did. Interestingly, however, women who used “look” also employed it more frequently when replying to other women.

My hunch was that men would use “‘look” more frequently in response to women with a condescending or patronizing undertone, and that stands to reason.

Men and women, alike, both use “look” twice as much when addressing women. It is important to note that while condescension may be a factor, there are certainly other possible explanations.

Q: What are your future plans?

A: I currently teach high-school English, but am transitioning back into the corporate world in a role that will allow me to apply and further explore areas of my research.

In that role, I will continue to observe how language is used to establish and reinforce authority and subservience, how it’s used to control and manage the flow of discourse, and the resultant effects of the aforementioned on the hearer's actions and belief system - all with the possibility and goal of continuing my studies in a Ph.D. program.

As a society, if we can better understand how language is used to influence our actions and belief systems, we will be better able to recognize people's motives and goals in communication.

Q: How has your experience at EMU been?

A: My experience at EMU has been, in short, wonderful. Dr. Eric Acton and professor and program coordinator Dr. Daniel Seely both possess a deep well of patience and commitment to helping students explore their research interests.

I’m thankful to have both as my thesis advisors. Outside of research pursuits, the other faculty with whom I’ve had the opportunity to work with and learn from have made my experience meaningful and memorable.

Similarly, my peer group is engaged, motivated, and inspiring. To be surrounded by people who ruminate about words and language, and all of their intricacies, feels like home.