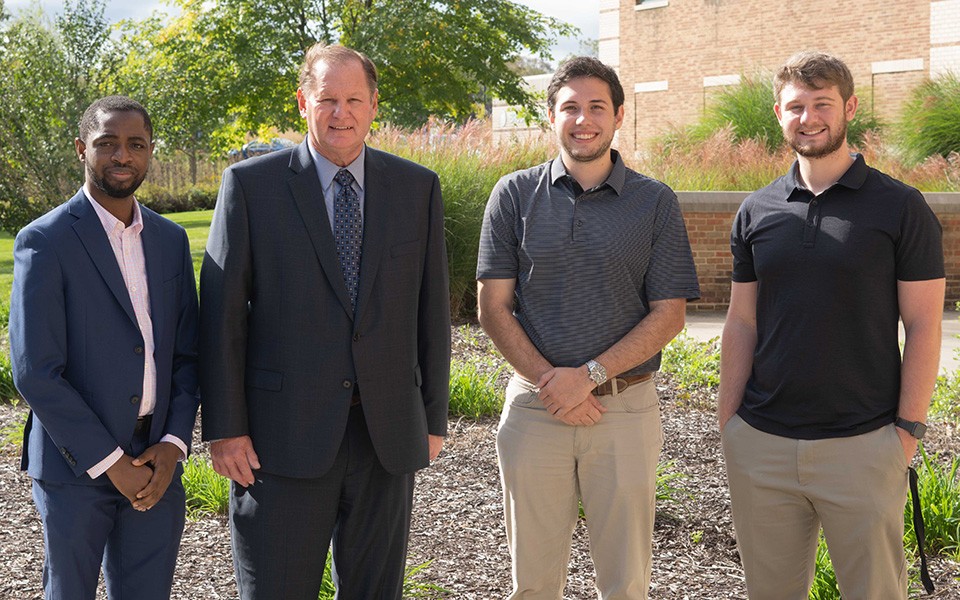 Alumnus Steve Klotz, second from left, stands outside with COB students on campus.

YPSILANTI -- Eastern Michigan University has announced that alumnus Steve Klotz, President and CEO of the Huizenga Group in Grand Rapids, has made a $1 million gift to EMU's College of Business to establish the Stephen J. Klotz Financial Learning Center.

Klotz graduated from EMU in 1977 with a BBA in Accounting. Following graduation, he began his career with Touche Ross and then joined the Huizenga Group in Grand Rapids, where he was ultimately appointed President and CEO.

When asked about the intentions behind his naming gift, Klotz credits the success of his career to EMU: “Eastern Michigan University equipped me with the tools to be successful in life” he said. “We’re born with relatively similar skills and abilities; it’s education that makes the difference.” That’s precisely why his gift will Give Rise to exciting opportunities for students in the College of Business and the Financial Learning Center named in his honor.

Eastern Michigan University President James Smith said, “Business leaders such as Steve Klotz make an invaluable impact on Eastern Michigan University. This gift will go a long way to paving the way for the success of current and future students – and the development of future business leaders. We are so grateful for his gift, and for his strong support of his alma mater.”

During Klotz’s recent campus visit, he was honored by President Smith, Dean Lord, College of Business faculty member Dr. Karen Craig, and staff member Cheryl Kernander. The event concluded at the Stephen J. Klotz Financial Learning Center where the campus community came together for an opportunity to thank Steve Klotz and speak with him about his experience at EMU.

Founded in 1849, Eastern is the second oldest public university in Michigan. It currently serves nearly 16,000 students pursuing undergraduate, graduate, specialist, doctoral, and certificate degrees in the arts, sciences, and professions. In all, more than 300 majors, minors, and concentrations are delivered through the University's Colleges of Arts and Sciences; Business; Education; Engineering and Technology; Health and Human Services; and its graduate school. EMU is regularly recognized by national publications for its excellence, diversity, and commitment to applied education. For more information about Eastern Michigan University, visit the University's website.