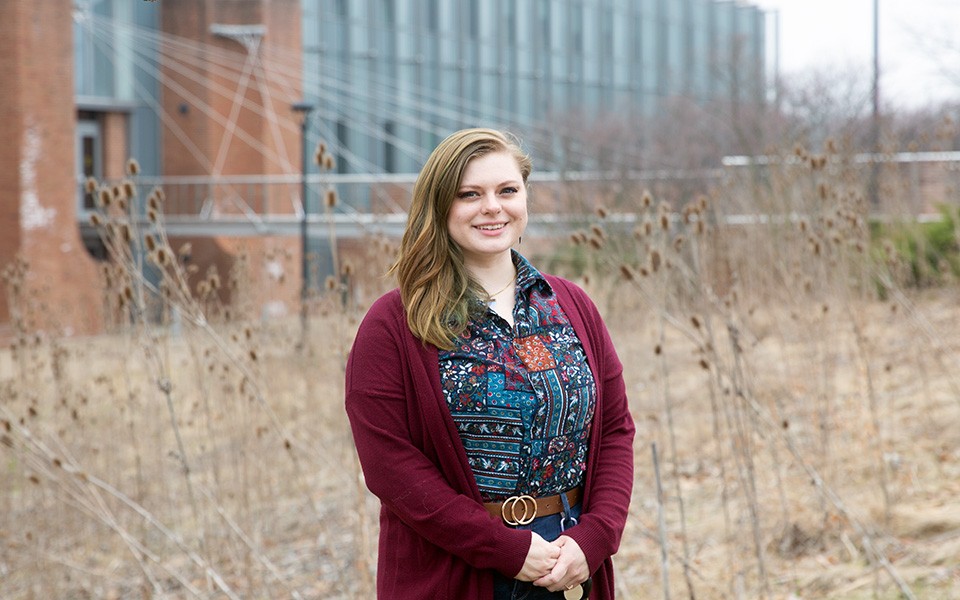 Since the time she was catching frogs and exploring the woods behind her house as a little girl, Alex Chumney—a junior Biology major with a concentration in ecology, organismal diversity and evolution—dreamed of following her passion and becoming a biologist.

Alex took a step closer toward fulfilling her dreams recently when she received a Goldwater Scholarship—an honor that places her among the nation’s top young scientists.

“I really love being out in nature,” Alex says. “It centers and calms me. My mom [a science teacher in the Walled Lake school district] also inspired me to pursue my studies. We’d be riding in the car and she’d identify all the plants growing on the side of the road. She also taught me about how humans impact the environment.”

“I did my best to keep costs down,” Alex says. “Even after receiving some scholarships, I had $25,000 in student loan debt after my first year. I made the hard decision to leave school.”

Alex returned home, worked full-time and eventually paid off her loans. Then she earned an associate’s degree in Biology at Washtenaw Community College, where she continues to work as an assistant laboratory technician for the Chemistry Department.

Last fall, Alex transferred to EMU. Within her first month on campus, she contacted Assistant Professor of Biology Emily Grman to inquire about research opportunities. Now, Alex is working with her to study the impact of soil community microbes on prairie restoration and why specific native plant species do not establish in restored prairies.

“Alex wowed me from our very first meeting,” Grman says. “She’s organized, responsible and super driven. She had already done a good amount of research before joining my lab. She also has the ability to articulate herself very well. She’s mature beyond her years.”

As an Honors College student, Alex will be writing an honors thesis based on her research with Prof. Grman.

“Prairie restoration is a common practice done in the Midwest, where a lot of prairies have disappeared due to agricultural practices and land development,” Alex says. “We want to protect specific plant species from being lost, but not all restored prairies establish the way we expect. We’re looking at the dynamics that prevent restored prairies from being as diverse as remnant prairies [those left undisturbed].”

This summer, Alex will be conducting a field experiment near Ann Arbor as part of her honors thesis research. She’ll plant 500 seedlings of approximately 10 different legume species to see how they might benefit from certain soil microbes.

“Legumes are a huge family of plants—think of the beans you eat with your dinner,” Alex says. “Native legumes are perfect for this type of research because they’re a very diverse plant family.”

“The application includes a main essay, several mini essays and lots of questions,” Alex says. “It’s important to write as succinctly and powerfully as possible. You straddle the line between describing your research and personal involvement in the research.”

The scholarship, named in honor of former U.S. Senator Barry Goldwater, is highly competitive. Of the more than 5,000 applicants in 2022, who are nominated by their academic institutions, just over 400 received scholarships. All of the awardees, including Alex, intend to obtain a PhD.

“Alex’s lab experience, her commitment to research, the quality of her work, and her personal story all made her a very deserving awardee,” says Ann Eisenberg, Dean of the Honors College. “My hope is she’ll become a professor and do work that really improves the environment in critical ways.”

Besides opening doors to graduate school, the $7,500 Goldwater Scholarship award provides Alex with a financial cushion.

“The award takes a huge weight off my shoulders,” Alex says. “I’ve also applied for research stipends and some biology scholarships. Every bit of funding helps.”

She adds that the supportive environment at EMU allows her to continue growing as a person.

“Every professor I’ve worked with at Eastern has been super helpful in sharing their perspective and insights,” Alex says. “The university also has opportunities for students who are willing to look for them. Even if you have to step away from college to get your bearings, there are opportunities and people here to support you when you’re ready to return. Follow your dreams. Follow your passion. The extra effort is worth it.”