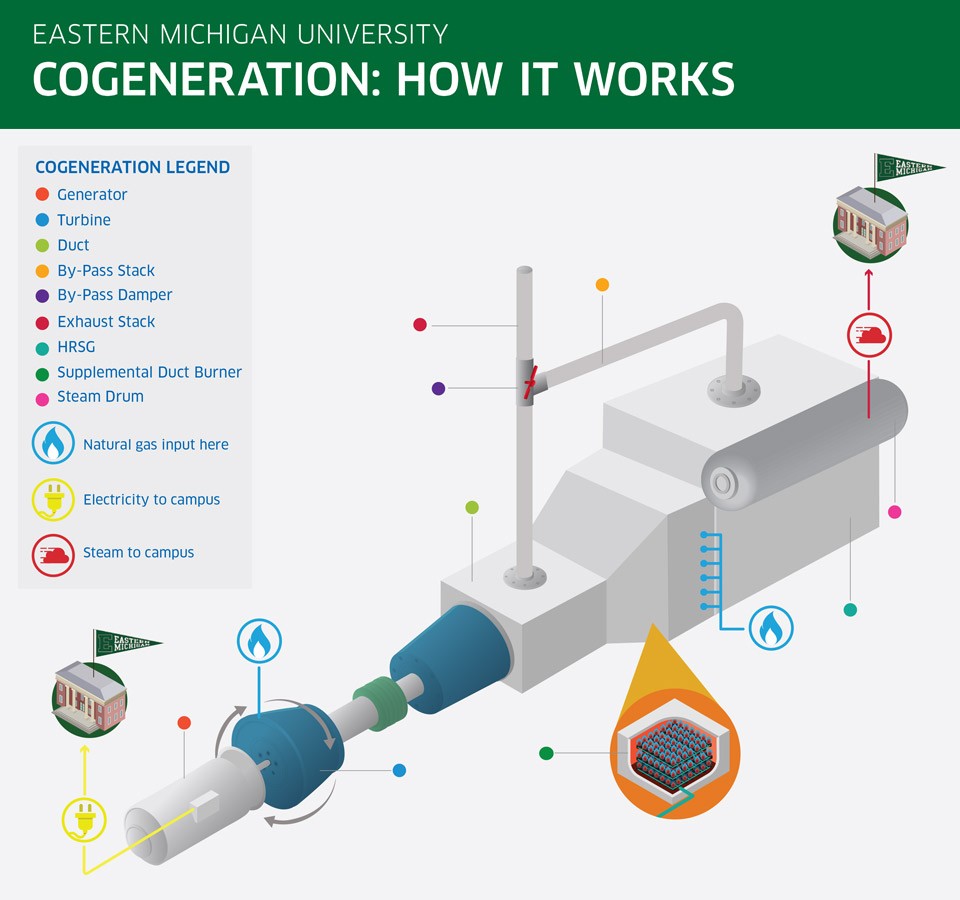 The cogeneration system uses natural gas to power the turbine, which generates electricity and heat from the exhaust air stream, producing electric and thermal energy from a single source of fuel.

YPSILANTI – On February 9, over the noon hour, Eastern Michigan University “flipped the switch” to symbolically energize the new Energy Center on campus, representing a dramatic change in how power is delivered throughout the EMU campus by reducing utility costs and greenhouse gas emissions.

Shortly after 12:15 p.m., the University activated its new energy saving 55-ton cogeneration unit, which will supply approximately 98 percent of the heat and 93 percent of the electricity to Eastern's 800-acre campus. Cogeneration is a combined heat and power system that uses one fuel source, in this case natural gas, to simultaneously produce electricity and steam heat.

The first phase of construction on the project occurred when a new 55-ton turbine was placed in EMU’s Central Heating Plant by a 500-ton crane last summer. At a project cost of $19.6 million, the new cogeneration system replaces a 29-year-old co-generation unit that ceased operations in April 2016. The older, less efficient unit supplied about 50 percent of EMU’s electricity and heat. The project will achieve annual net energy savings to the University of more than $2.8 million, or more than $50,000 a week, creating a return on investment in just under nine years.

How much environmental savings will result? The new cogeneration unit will create an annual reduction of 21,305 tons of carbon dioxide (CO2), equivalent to:

Eastern has partnered with national energy partner ENGIE Services. U.S., based in Oakland with regional offices in Michigan, on the project. ENGIE has worked with Eastern in the past, including assistance in facility upgrades in residence hall and dining areas that have helped the University meet its environmental and energy-savings objectives. Please see the video that discusses the partnership in detail.

“Today marks a physical milestone for Eastern Michigan University,” said President James M. Smith. “Our new co-generation system will markedly decrease our utility expenses while making a major environmental impact. On an individual level, the new system is far more efficient and resilient, which translates to enhanced comfort in our learning environment for students, faculty and staff at Eastern.

“This project is part of our longstanding efforts to identify new and innovative ways to reduce costs and improve the University’s overall financial position. Our work on this project is drawing significant interest, from both a financial and environmental standpoint.”

“Our long-term energy program with Eastern Michigan University represents the best kind of partnership – working with a dedicated, regional leader that is committed to leveraging clean energy to maximize positive impact on their community,” shared John Mahoney, President and CEO of ENGIE Services U.S.

“The new cogeneration system that will power the EMU Energy Center is a historic campus enhancement that will have a positive financial, environmental, and human impact for generations of graduating classes to come. ENGIE Services U.S. is proud to partner with EMU as it continues to set the bar for other higher education institutions throughout the country that are moving towards cleaner, more efficient forms of energy.”

In addition, the upgrades inside of the Central Heating Plant represent a distinct learning opportunity for students attending EMU’s College of Technology. ENGIE’s education team worked with University faculty to roll out an internship program that utilizes the cogeneration technology as a real-world learning opportunity. Over the course of the spring through fall semesters in 2017, two students shadowed engineers and construction managers on the project site to gain practical knowledge through direct, hands-on experience.

History of the partnership

In the spring of 2009, Eastern identified two key goals the University wanted to meet during the renovation of four campus residence halls and two dining halls: Make the spaces more efficient to operate, and more comfortable for students and faculty. With the help of ENGIE Services U.S., EMU made essential facility upgrades that resulted in reducing energy costs by several million dollars over the life of the program.

After completing comprehensive facility upgrades during the successful first phase of work, EMU partnered again with ENGIE in the fall of 2016 to improve the performance, reliability and efficiency of its Central Heating Plant. But the University still needed to replace the 64-year-old boiler and a 28-year-old cogeneration system located inside the Central Heating Plant, which sits on the western end of campus, off Oakwood Street.

EMU secured several accolades for the comprehensive energy upgrades implemented during Phase I, including an Energy Efficiency Project Award from the Energy Services Coalition and recognition as one of the top green colleges in the nation by the Princeton Review.

ENGIE Services U.S. is a national energy company that works with education, government, commercial, industrial, and other organizations. It delivers integrated programs that drive sustainable results. Over the past 40 years, ENGIE Services U.S. has provided more than $2 billion in savings to its customers. For more information, visit the link to the company website. For further detail on ENGIE Services’ U.S. relationship with EMU, see the link to the case study. 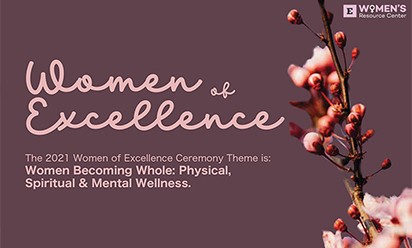 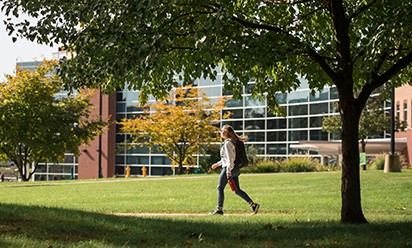 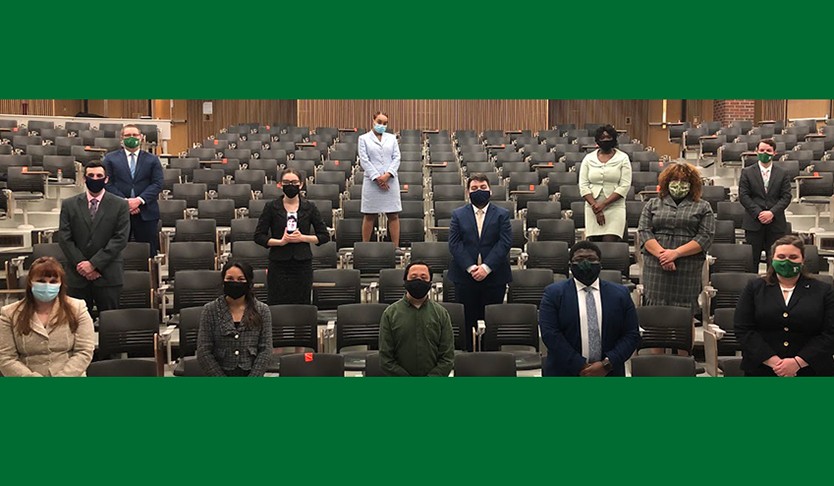 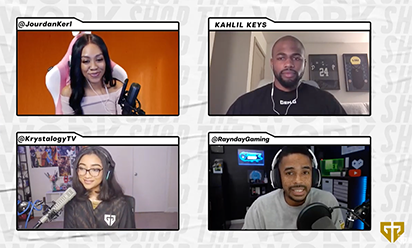 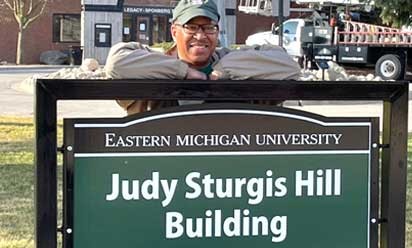