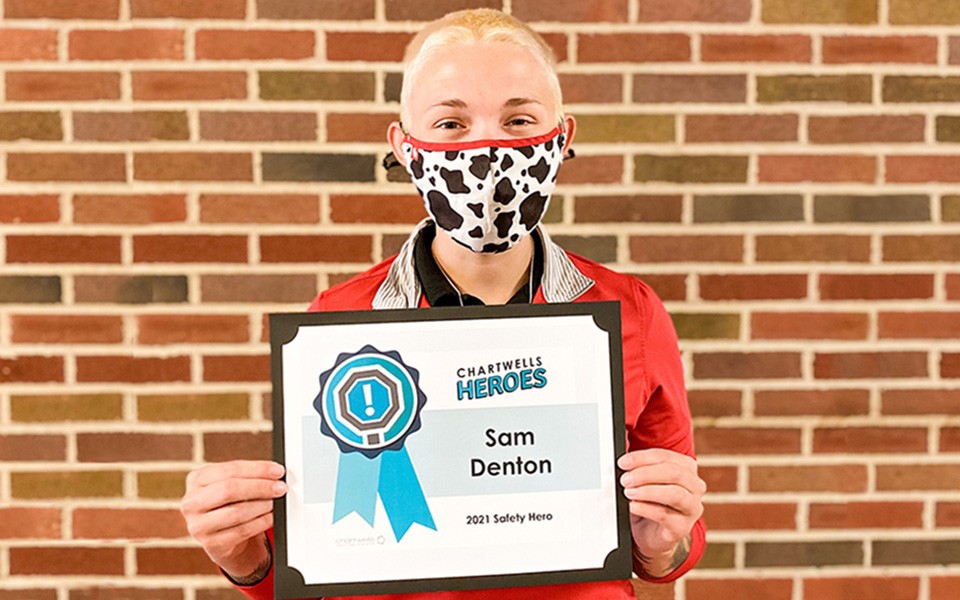 YPSILANTI, MI - Chartwells Higher Education, a recognized leader in the university contract foodservice market, launched Chartwells Heroes earlier this spring. The campaign allowed internal team members across the country to recognize their fellow associates in a number of categories including: culinary innovation, sustainability, safety, and diversity and inclusion. Employees were nominated through Nudge, an internal social media app for Chartwells associates.

Sam Denton was selected as a division leader in the safety category, out of over 5,000 nominations. Since joining the E-Dining team as a student food service worker in 2016, Sam has overseen numerous operations on campus, including Chick-fil-A and Smashburger. She has been promoted several times, most recently to Director of Dining Services, and has maintained a culture of safety at every level of employment.

As the current manager of Chick-Fil-A on campus, Denton has achieved Elite Status for the McKenny location by passing over 18 audits since January 2021 and achieving 100 percent perfect scores on 12 of them. Elite Status also shows, through robust systems and processes, a clear demonstration of food safety culture and consistent compliance with regulations.

“Maintaining a safe work environment is one of our top concerns at E-Dining and Sam has been a major reason why we have been so successful in this effort. She has implemented many creative tactics to keep our team safe,” said Gretchen Sanchez, Director of Operations for EMU Dining Services. “Being nominated a Chartwells Hero is a true honor and we are so proud of Sam for being recognized as a safety leader out of over 300 schools.”

On top of being an outstanding manager, Sam is also a safety champion for Chartwells at EMU. In this role, she has created easy to use training documents to ensure a standardized process across campus for reporting injuries and completing monthly safety tasks in each unit. These training materials proved to be successful and were shared with Chartwells Higher Education’s corporate safety team to be used on other campuses across the nation.

Being awarded a Chartwells Hero nomination puts EMU on the map as a school which prioritizes food and employee safety. Out of over 5,000 nominations, Sam was one of 48 Chartwells employees to be recognized.

Chartwells is the recognized leader in contract food service management, hospitality and award-winning guest service within 300+ college and university dining environments throughout academic institutions across the U.S. Chartwells’ brand mantra, “Where Hungry Minds Gather,” signifies its commitment to reinventing the dining experience for the next generation of students and beyond. “Our nutritious cuisine not only satisfies the unique appetites, lifestyles and dietary needs of every guest dining on campus, but it also brings people together to promote the high-intensity relationships that will prepare students for the future,” the company says. More can be learned at http://chartwellshighered.com/

Eastern Michigan University announces first-round winners of the “Get the VAX to WIN” program.