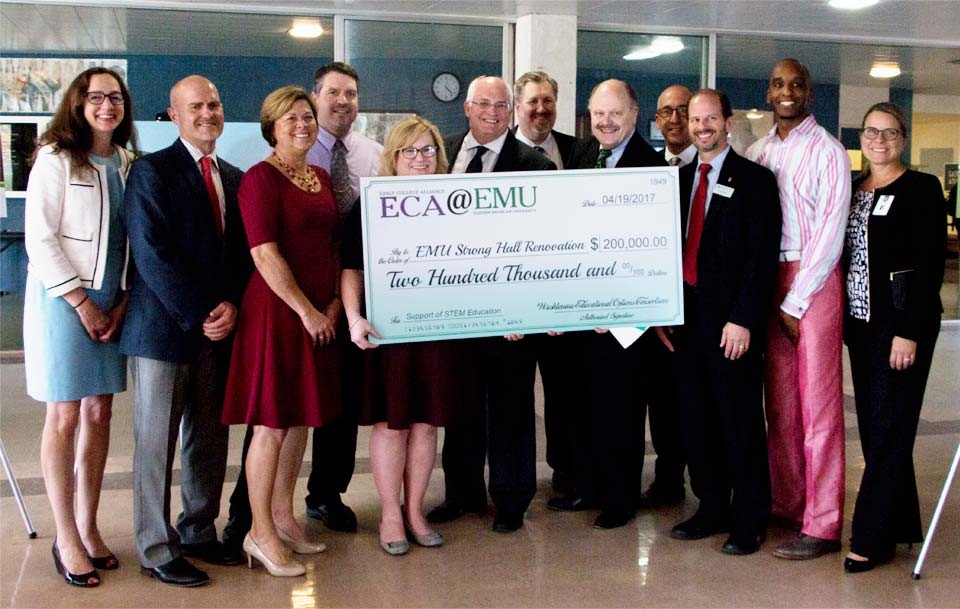 The Washtenaw Educational Options Consortium and its Early College Alliance program announced the donation of $200,000 towards the renovation of Strong Hall.

YPSILANTI – In a move that highlights the partnership between Eastern Michigan University and local school districts, the Washtenaw Educational Options Consortium (WEOC) and its Early College Alliance program formally announced the donation of $200,000 towards the renovation of Strong Hall, a key STEM-focused facility at Eastern.

A check presentation ceremony announcing the donation was held on Wednesday, April 19, at 4 p.m. in Strong Hall on Eastern’s campus.

The event featured remarks from:

Superintendents and officials from several of the partner school districts were on hand for the presentation, including Ypsilanti, Ann Arbor, Lincoln, Manchester, Milan and Saline. The event also featured the first public display of initial design concepts for the “new” Strong Hall.

The Early College Alliance (ECA), one of three programs under the WEOC, is located on Eastern’s campus. It is a distinct educational program designed to immerse high school students into the post-secondary learning environment. It exists in partnership with local school districts, including the Washtenaw Intermediate School District.

The ECA allows students to earn up to 60 transferable college credits as part of their high school graduation requirements at no cost. They begin the program as high school students, and transition to full-time college students. About 430 students are enrolled at Eastern through the ECA. The ECA is currently accepting enrollment applications for fall 2017 for students currently in 9th or 10th grade.

The WEOC is comprised of the nine local school districts in Washtenaw County. The districts cooperate to provide a range of educational options to area students.

“Eastern Michigan University has provided tremendous support to ECA over the years,” said David Dugger, executive director of the WEOC . “This donation recognizes both WEOC’s and our county school district’s gratitude to the University in being an exceptional educational partner. It also underscores WEOC’s commitment to investing in Eastern as a place where Washtenaw County students can go to school and excel in general education and STEM disciplines – both through the ECA and after they graduate high school.”

The ECA is funded through a percentage of each school district's foundation allowance. It continues to seek additional funding through both public and private sources.

The donation will help offset the University’s share of funding the renovations at Strong Hall, which has been included on the state of Michigan’s capital funding plan. The estimated cost to renovate Strong Hall is $39.5 million. At a funding mix of 75 percent state and 25 percent University, Eastern's cost share would be about $10 million.

Strong Hall is part of Eastern's Science Complex, and currently houses key science programs, including the Mars Computer Weather Simulation Lab, the Plasma Physics Lab, the Laser Physics Lab, the Modern Optics Lab, Environmental Sciences, and the departments of astronomy and physics and geology and geography. It is a crucial academic facility on Eastern’s campus; more than 25 percent of the University’s STEM lab classrooms are in the building.

The project will involve renovation of the entire 80,713 square feet structure, including modernizing classrooms and labs, lecture halls, student commons areas and faculty offices, along with creating flexible use spaces for research and instruction and updating of architectural, structural, mechanical and electrical systems.

Under current construction plans and subject to the state’s capital outlay approval process, the University is prepared to close the building and begin construction this summer.

About Eastern Michigan University
Founded in 1849, Eastern is the second oldest university in Michigan. It currently serves 22,000 students pursuing undergraduate, graduate, specialist, doctoral and certificate degrees in the arts, sciences and professions. In all, more than 300 majors, minors and concentrations are delivered through the University's Colleges of Arts and Sciences; Business; Education; Health and Human Services; Technology, and its graduate school. EMU is regularly recognized by national publications for its excellence, diversity, and commitment to applied education. For more information about Eastern Michigan University, visit the University's website.