Kathleen Fojtik Stroud (BS73) is recipient of the 2017 Starkweather Award 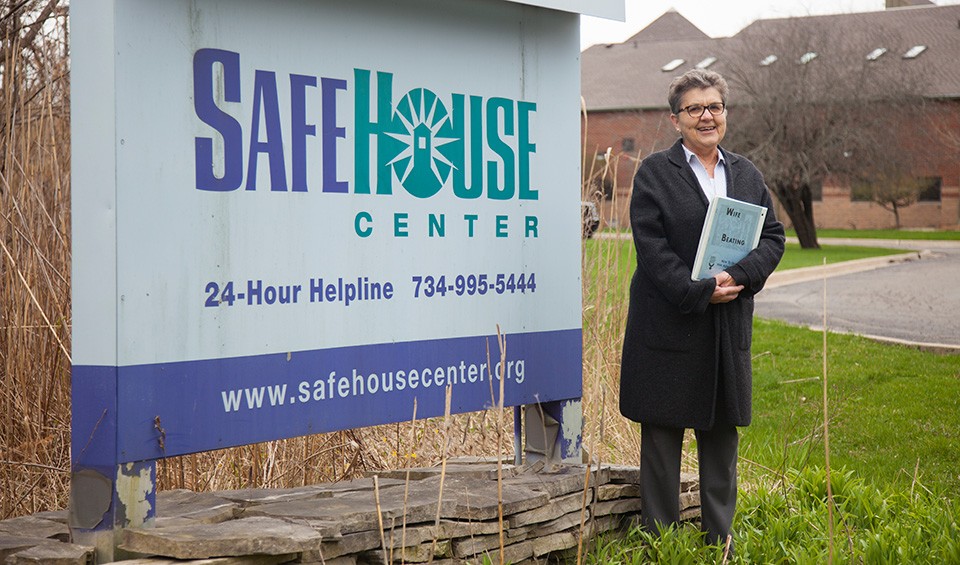 Kathy Stroud created a network of safe houses in 1978, providing a much-needed respite for women and children.

Fierce determination. That’s what can be read on the face of EMU alumna Kathleen Fojtik Stroud (BS73). That and a complete inability to give up on pursuing justice. Stroud received the 2017 Starkweather Award from the Women’s and Gender Studies Department at their annual awards banquet on Monday, April 10.

The Starkweather Award, founded in 2015, is given to a woman from the regional community who exemplifies the characteristics of generosity, risk-taking, selflessness and a progressive approach to advocacy for social justice issues.

“She was a pioneer. In the 1970s, domestic violence wasn’t spoken about openly. Even if police were called, it was seen as a private problem,” says Jackie Goodman, Ph.D., department head and professor for the EMU’s Women’s and Gender Studies Department.

The establishment of Safe House is just one of Stroud’s many accomplishments. She graduated with a bachelor’s in occupational therapy from EMU in 1973. At the age of 28, she was elected to the Washtenaw County Board of Commissioners, where she represented women’s issues for four terms. She’s also served on the Washtenaw County Board of Health for 40 years, most recently working to pass the Tobacco 21 ordinance—a ban on selling cigarettes to people under the age of 21.

A longtime member of the National Organization for Women, Stroud served in various positions including president of the Ann Arbor chapter and board member of Michigan NOW. She’s a former president of the American Association of University Women. She’s also served as a precinct delegate for the Democratic Party in Washtenaw County.

“She’s a fighter and she won’t speak about her own accolades. She’s a powerful woman and a powerful fighter for justice,” says Goodman.

Her friend, Mary Pence, a top family law attorney from Washington, D.C., flew in to present Stroud with the Starkweather Award. Pence was inspired to enter the family law field by Stroud’s tireless work in social justice.

“Kathy is a visionary, but she also knows how to think small and work one woman at a time. If I described her in just three points, they’d be: visionary, unstoppable and feather-ruffler,” says Pence.

So, what’s the next thing in Stroud’s sights?

Getting Governor Rick Synder to grant clemency to 10 women incarcerated at the Huron Valley Correctional Facility. Each woman’s story is unique but each one shares two things in common: experiencing domestic violence and serving life sentences for their crimes. Stroud used her acceptance speech to urge listeners to write to Synder on behalf of the women and to write to the women themselves—notes of encouragement and cards to mark the seasons.

“There’s a hell of a lot of work to be done. There’s so much to be done and so little time,” says Stroud.

Starkweather lived in the 1800s and is known for her generosity and her work in the women’s movement. She raised funds for the medical supplies during the Civil War as part of the Women’s Relief Corp. Her Ypsilanti home became the Ladies Library in 1890 and featured a Tiffany window. In 1897, she bequeathed $10,000 for the construction Starkweather Hall which is now the oldest building on campus and holds a historical designation.