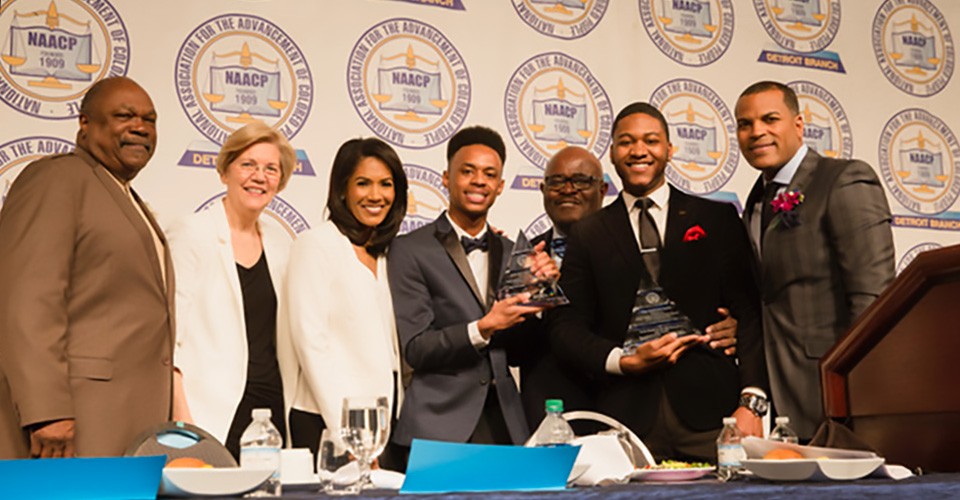 Johnson, President of the EMU Black Student Union this past year; and Anthony, President of the EMU Student Branch of the NAACP, received the Great Expectation Award, in honor of their leadership this past year in advancing the cause of justice at Eastern, along with demonstrated potential for future leadership in the country. Their respective organizations were also listed on the awards.

“Great Promise in the Next Generation,” reads the award, which also lists the Rev. Dr. Wendell Anthony, Detroit NAACP president, along with executive director Donnell White as leading the group honoring the students.

Johnson reflected on the exceptional honor and a very exciting night.

“Tonight, I had the opportunity to meet Representative Debbie Dingell (D-Mich), Reverend Dr. Wendell Anthony, and a host of other individuals that are connected to the NAACP,” he said. “Nonetheless, tonight's highlight was meeting with Representative Maxine Waters …

“Representative Waters is a true advocate for the rights of people everywhere, and throughout her tenure in the political sector has consistently affirmed her position as a strong Black woman that refuses to be belittled.”

Anthony said, "I am honored to receive the this award on behalf on Eastern's NAACP Chapter. As most know, it's been an extremely difficult year for students of color on our campus. This award is for every family, single parent, lawyer, politician, faculty, staff, and student who took a stand against injustice on our campus. Your work has not gone unnoticed and you are appreciated."

Rema Reynolds, a professor in the EMU College of Education who serves as faculty advisor to the BSU and attended the event, said, “This esteemed award belongs to Jaren, the BSU leadership, and many other diverse students and faculty who displayed unpopular courage to stand up and sit in for equity, justice, and our collective humanity.

“They organized and talked back directly to those who threatened their sense of community through vandalism and racist intimidation. Across cultures and borders, students rallied to demonstrate their status as full members of EMU. We trust that the University will remain vigilant in its efforts to create and maintain a welcoming culture of inclusion. I am so proud of the students and faculty who persisted, and grateful to Rev. Anthony and the NAACP for recognizing and rewarding bravery and leadership our youth continue to display.”

Professor Ronald Woods, a professor of Africology and African American Studies at Eastern who has also been actively involved with EMU’s student leaders, said, “These awards speak highly of our students, of the educational value of EMU and of the culture of student engagement we promote.”

The Freedom Fund Dinner of the Detroit Branch NAACP was launched in April 1956.

Today, the event is the largest sit down dinner of its kind in the world. It serves approximately 10,000 guests with a first class meal, world-class entertainment, and keynote speakers who’ve played powerful roles in American history.

For more details on the event, see the Detroit NAACP website.