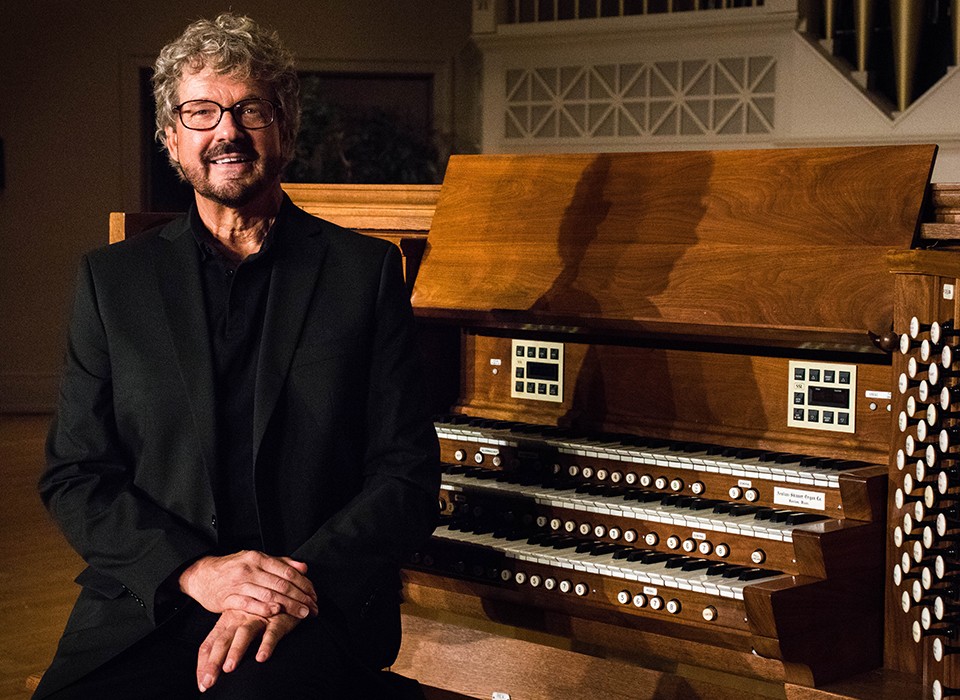 Michael Burkhardt, EMU organist and professor of organ, believes in preparing students to be good performers, good educators and good ambassadors for the art. (Photo by Cody Martell)

Michael Burkhardt has never forgotten the spiritual leader of the Lutheran church he attended as a child in the tiny Wisconsin town of Howards Grove, “about two hours north of Kenosha.”

“We had a rookie pastor who offered free lessons, first in piano and then organ,” says Burkhardt, Eastern’s resident organist and professor of organ. “I think I started when I was in sixth grade. After that, I always wanted to be a music teacher.”

The minister wasn’t the only grownup inspiring kids in the church. “I sang in a children’s choir— there were 12 of us—in that little church,” he adds. “That we had a children’s choir at all was unique in such a small town. Our director taught us the best music you could possibly imagine, like all the main arias from Handel’s Messiah. I still know them all.”

Quite a crop grew from the seed those folks sowed. In addition to his duties at Eastern, the ebullient Burkhardt is the founder and artistic director of the Livonia-based Hearts, Hands and Voices, a worship and fine arts program for children in grades 2-7; composer of two settings of the Eucharistic liturgy as well as numerous works for organ, chorus and handbell; author of two highly regarded books on choral singing; leader of internationally acclaimed hymn workshops and festivals around the country, and director of worship and the arts at Holy Cross Lutheran Church in Livonia.

That’s not an exhaustive list, but it clearly shows that music, teaching and children are the loves of his life, and his service to each nourishes them all.

“It was in college that I fell in love with teaching young children,” says Burkhardt. “That changed my direction.” He completed his undergraduate work at Carthage College in Kenosha, then earned a master’s degree from Southern Methodist University and his doctorate from Arizona State.

“I simultaneously taught both elementary school and college for a number of years,” he says. That started when he was college organist and head of church music and music education at Christ College Irvine (Calif.). “I was always involved with children and then teaching college students how to teach children. That same thing has happened with my students here at Eastern.”

He was on his way back to another southern California university, after seven years on the Carthage faculty, to take an artist in residence gig when a friend in Livonia told him, “You have to come here; we’d like to start a program for children at the church.”

“After lots of inner going back and forth, that’s what I really felt called to do,” Burkhardt says. “It was supposed to be for 18 months and I’m starting my ninth year.”

That program, the aforementioned Hearts, Hands and Voices, has served nearly 400 students since its founding. “I think it’s so important in our society, when the arts keep getting cut from school programs, that we have some vehicle for kids to get an arts experience,” he says. “It really helps them to learn how to live in the world, be more human, be in touch with who they are. I’m really committed to the idea that the arts are for everyone. We’re all in this together.”

That perspective is a motivating force behind his hymn workshops and festivals. “It used to be that we would sing together at family functions or around the campfire,” says Burkhardt. “I don’t know how much that happens anymore, but hymns are one opportunity for people to come together, whether they’re trained or not. It’s all-inclusive. Hymns connect us with people of the past, and with people of our own time, not just from our small geographic area but all over the world.”

Burkhardt vividly conveys that point in his workshops. “I try to create an experience that captures a glimpse of the context, both historical and cultural, in which the hymn was born, and then create an informed experience based on that with the singers,” he says. “How do we take what we know of those cultures, and the kinds of sounds they produced, and embrace it?”

Perhaps the way Burkhardt embraces teaching children would be a useful model. “When a child who can’t sing or make pitch all of a sudden finds his or her voice, it’s such an incredible high, for me and the rest of the kids and for that individual. Sometimes people regard children as the future of the world. I don’t really think of them as the future; I think of them as an integral part of the world right now. That changes everything. You value their gifts and abilities where they are at the present moment, not where they’re going to be 10 years down the road. I have to think like a child, in the most positive sense of that.”

As dedicated to his faith as he is to his art, he brings what could be called a missionary’s zeal to his role, and he’s found it fits at Eastern.

“In a world where the organ is less popular than it used to be,” he says, “it’s really important to have an institution that supports and fosters both the teaching of it and preparing students to go out into the world to be good performers, good educators and good ambassadors for the art.”