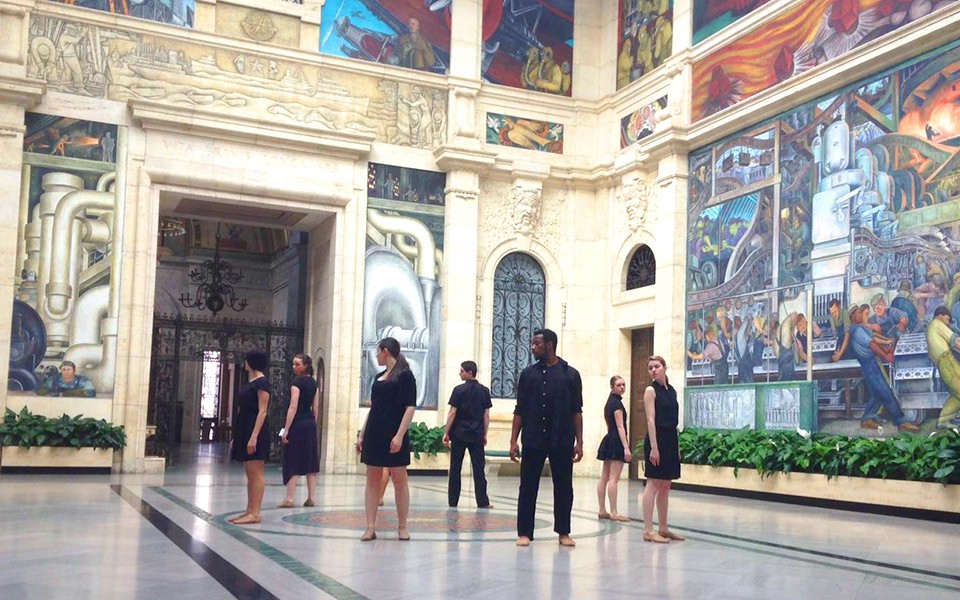 One of Joanna McNamara's recent dance films, "For Diego," featured EMU dance students and was recorded at the Rivera Court at the Detroit Institute of Arts.

Joanna McNamara’s dance films have been shown in South Korea, Prague and Carnegie Hall, but what she’s really excited about now is an impending screendance event in Ypsilanti.

The EMU professor of dance is the co-founder and co-producer (with Marcus White, founder and creative director of dance-based performance company White Werx) of Screen. Dance. Now., a one-day festival at the Riverside Arts Center on Saturday, October 7, that will showcase multiple aspects of the increasingly popular media genre at the intersection of film, music and dance.

“There have been choreographers and filmmakers making films for a long time,” says McNamara, “but it’s really taken off and gotten very competitive in the last decade or so, although the Dance on Camera festival in New York City has been going on for 45 years.”

When it comes to competition, McNamara knows whereof she speaks. She was the choreographer for “LandCakeLock,” which won one of the two Audience Top Choice awards at Moving 24fps [frames per second], an event in Detroit in May where choreographers were given three prompts and randomly teamed with filmmakers to create, rehearse, perform, film, edit, score and present a screendance—all between 11 p.m. on a Thursday and noon the following Sunday.

McNamara was in New York that Thursday, so two of her students subbed for her at the meeting where the prompts and the choreographer/filmmaker teams were announced and called her with her “assignment.”

“I had to choreograph something based on the prompts of ‘lock,’ ‘taste’ and ‘showing up’ by the time I got back to Detroit,” she says. “We rehearsed with the five dancers all day Friday, then rehearsed and filmed all day Saturday in a beautiful, empty lot in Detroit, which I discovered before leaving for New York. We finished filming at 4 p.m. on Saturday and the filmmaker, Steve Karageanes, stayed up all night editing and adding music to make the noon Sunday submission time.”

You can see the results—featuring EMU dance students Natalia de Miguel Annoni, Colleen Murphy, Patrick McCrae, Leda Stimac, Deja Hood and Reeves DeVoe—as the “LandCakeLock” video is posted online. As much as it sounds like cramming for an exam or scurrying to finish a term project at the last minute, McNamara describes the experience as “great fun.”

She expects no less from the upcoming festival, and not just because a screening of “LandCakeLock” will be one of its features: the entire Moving 24fps program will be shown between 4 and 5:30 p.m., followed by a program of national and international screendance shorts, adjudicated by McNamara and Morris, from 6:30 to 7:30 p.m.

“We called for submissions in July, kept it open for about a month, and got over a hundred entries from all over the world,” says McNamara, “and they are beautiful films. It’s been quite a process picking the 10-12 of them that we’ll be showing.”

The day’s final attraction starts at 8 p.m., a presentation of Jitterbugs: Pioneers of the Jit, a feature documentary about the Detroit street dance style known as Detroit Jit, directed by Haleem “Stringz” Rasul, the artistic director of Hardcore Detroit. A live performance of Jit will follow the screening and close the festival.

“This is going to be such a great event,” says McNamara. She and White hope to make it an annual affair, but McNamara is already certain of one thing. “Another benefit of this festival is that my EMU dance students are involved in it,” she says, “and gaining firsthand experience in producing a community project.”