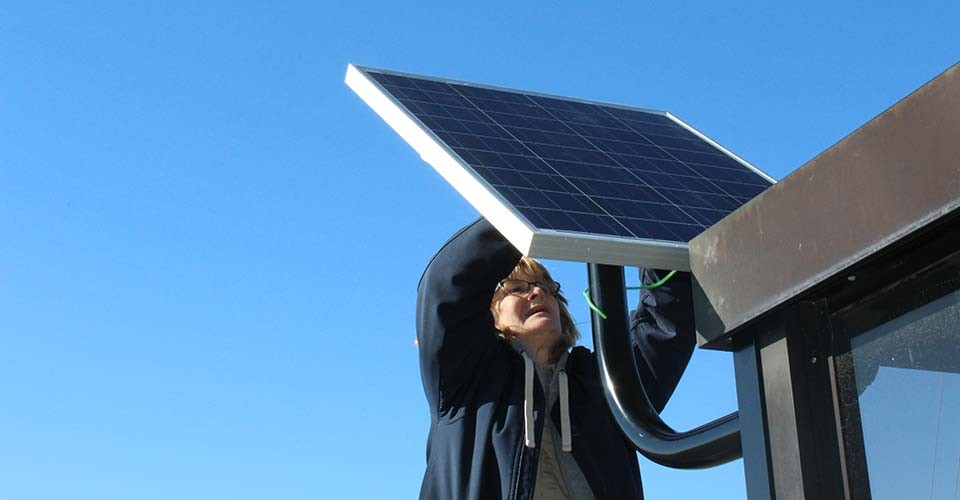 YPSILANTI – Bus riders on the Eastern Michigan University campus will enjoy a new level of lighting at ten public bus stops as a result of installation of solar panels.

EMU’s Physical Plant is installing the panels at the various AAATA (The Ride) bus stops that line the perimeter of campus in order to provide better lighting during the evening hours.

The University has already installed panels at seven locations, and plans three more. The cost of the solar panels is $14,000.

Solar panels use the sunlight as a source of energy to generate electricity.

According to Bilal Sarsour, EMU director of facilities, here is how they work:

• The solar panels are actually comprised of small units called photovoltaic (PV) cells that convert sunlight (photons) to electricity (voltage). Each PV cell is basically a sandwich made of two slices of semi-conducting material, usually silicon, that create an electrical charge when exposed to sunlight.

• Solar panels work by allowing photons or particles of light to knock electrons from atoms, generating a flow of electricity. The energy is stored in the battery assemblies, to be utilized at night. Occupancy sensors on the bus stops help use the stored energy efficiently.

The panels complement the University’s continuing sustainability efforts, the most recent of which is the activation in February 2018 of the new energy saving, 55-ton cogeneration system, which will supply approximately 98 percent of the heat and 93 percent of the electricity to Eastern's 800-acre campus.

Cogeneration is a combined heat and power system that uses one fuel source, in this case natural gas, to simultaneously produce electricity and steam heat.

At a project cost of $19.6 million, the new cogeneration system replaces a 29-year-old co-generation unit that ceased operations in April 2016. The older, less efficient unit supplied about 50 percent of EMU’s electricity and heat.

The project will achieve annual net energy savings to the University of more than $2.8 million, or more than $50,000 a week, creating a return on investment in just under nine years.

The new panels are also the latest addition to a variety of new lighting projects completed in recent years around campus in order to continue to improve safety and security.

Those enhancements include lighting along Huron River Drive, on the north end of campus; lighting on Oakwood Street, on the western border of campus; and a variety of interior lighting projects, including the main campus mall sidewalk that runs from Cross Street to the Pray Harrold hill.