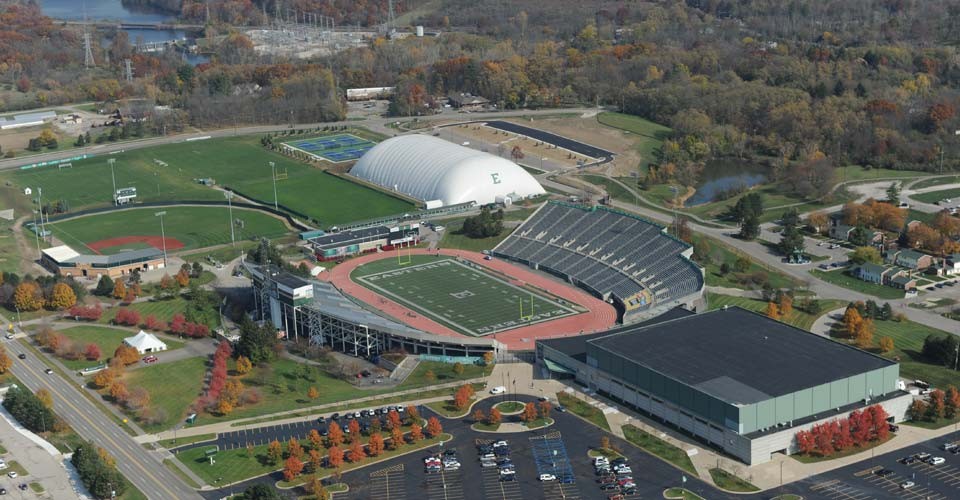 YPSILANTI – Eastern Michigan University announced today, March 20, that it will reduce its intercollegiate athletic program by four sports, effective at the end of the 2018 spring season. The action is being taken as part of the University’s overall budget restructuring efforts.

Affected by the decision are the sports of softball, men’s swimming and diving, women’s tennis, and wrestling. With the change EMU, which previously led the MAC with 21 sports, will now have 17 sports (seven men’s sports and 10 women’s sports). This action in no way impacts Eastern’s affiliation with the Mid-American Conference (MAC).

“We are very saddened by having to make this move, which is necessary as we continue to align the University budget with enrollment and state funding trends,” said University President James Smith. “This aligns us with our Mid-American Conference peers in total number of sports, and is part of our ongoing effort to realign resources to ensure that we continue to invest in high-demand high-quality academic programs and world-class facilities.”

“The student-athletes affected by this are our priority. We will honor all athletics scholarships for the students should they decide to remain at Eastern to complete their degrees, which we hope they will.”

“We understand that some may leave Eastern to continue their sport at another university, and we have committed to offering them our full support in that process. We have wonderful student-athletes, coaches and athletics staff here at Eastern who make a tremendous contribution to campus life – in competition, in class and in our greater community. This is a difficult day for all of them, and for all of us.”

James Webb, chairman of the EMU Board of Regents, said, “As a former student-athlete and swimmer myself, I profoundly share the pain felt by the affected student-athletes. This move is part of a broad, University effort to properly adjust our budget for the years to come, and Athletics is actively participating in this process. The Board of Regents fully supports President James Smith and Vice President/Director of Athletics Scott Wetherbee. They are to be commended for taking on a difficult challenge and acting in the best interests of Eastern Michigan University.”

The decision to reduce sports will align Eastern Michigan with its Mid-American Conference peers in terms of types and total number of sports teams sponsored by the university. The NCAA requires Division I Football Bowl Subdivision (FBS) schools to sponsor a minimum of 16 sports and the Mid-American Conference requires member universities to sponsor football, men’s basketball, women’s basketball, and women’s volleyball.

"This was an extremely tough decision and it is a very sad day," said EMU Vice President and Director of Athletics Scott Wetherbee. "As a former college student-athlete who went through this process when my sport was eliminated, I empathize with how difficult this is for our impacted student-athletes.”

“Each of the sports involved has a strong network of student-athletes, alumni and powerful traditions of success on and off the field. This makes the decision even more difficult, but there is no easy way to do this without having significant impact. It is a painful step for all parties involved, but it is necessary given the University's need to realign University resources.”

“I have said all along that we in Athletics are a part of this University – part of everything that happens on campus, and that we’re all on the same team. Given that, we must take a strong role in this difficult work of adjusting University expenses.”

“My heart goes out to all those who are disrupted by this change. We are proud of the way they represent Eastern Michigan University."

Wetherbee said the announcement was made today, in mid-March, in order to allow the student-athletes as much time as possible to find new schools at which they can continue in their sports, if they choose to do so. This also will allow the eight coaches affected time to find new positions.

The University considered many factors, including: program cost, athletic facilities (current and on-going), and a comparison of sports sponsored by MAC schools.

Further details regarding the decision can be found in the Question and Answer document posted on the University website.

The last time EMU changed its sports offerings was in 2000, when both men's tennis and men's soccer were discontinued and women’s rowing was added. Prior to that, men's gymnastics and women's field hockey were eliminated in 1988.

About Eastern Michigan University
Founded in 1849, Eastern is the second oldest university in Michigan. It currently serves 20,000 students pursuing undergraduate, graduate, specialist, doctoral and certificate degrees in the arts, sciences and professions. In all, more than 300 majors, minors and concentrations are delivered through the University's Colleges of Arts and Sciences; Business; Education; Health and Human Services; Technology, and its graduate school. EMU is regularly recognized by national publications for its excellence, diversity, and commitment to applied education. For more information about Eastern Michigan University, visit the University's website.