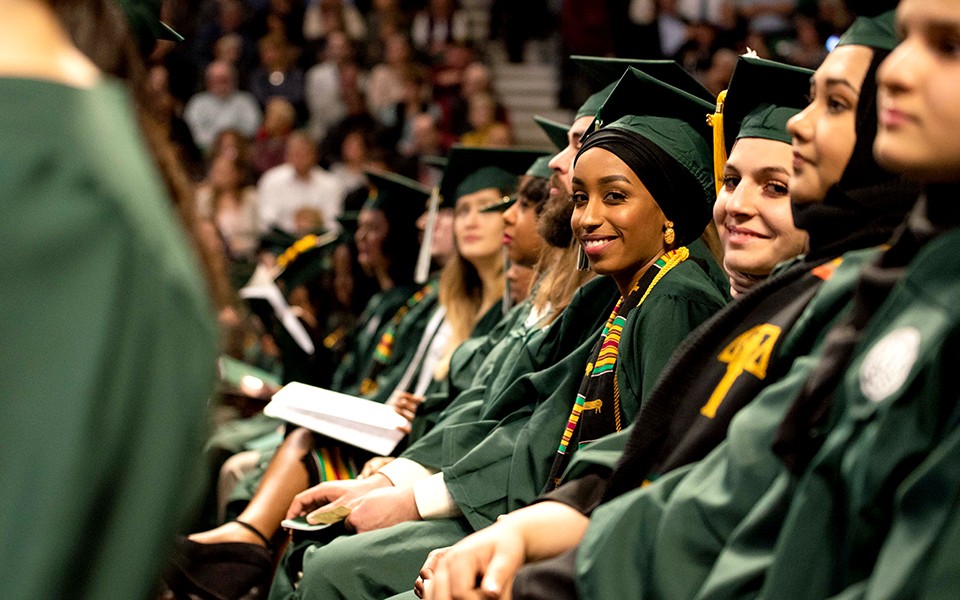 YPSILANTI – Eastern Michigan University, which has shown significant yearly improvements in its graduation rate, plans to further increase the rate at which entering freshman graduate the University, primarily through a strong focus on student advising processes.

The University’s four-year, five-year and six-year graduation rates have increased across the board in recent years. Four-year rates have increased by nearly 7 percent since 2010. Five-year rates increased by 8 percent since 2009 and the six-year graduation rate reached 45 percent for students who entered Eastern as freshmen in 2012, an increase of nearly 5 percent from the previous year’s entering cohort, according to figures from the EMU Office of Institutional Research and Information Management (IRIM).

In addition, for students with financial needs who receive Pell Grants, the graduation rate has increased more than 6 percent in the last year. The current 36 percent six-year graduation rate for students receiving Pell Grants has grown over the past thirteen years, and is now the highest on record. Please see the chart outlining completion rates.

The University has made student retention and completion an institutional priority, and is seeking to further improve on those numbers through a variety of goals and actions, most notably a continued focus on targeted advising services, said Michael Tew, associate provost and associate vice president for academic programming and services.

Eastern seeks to increase the overall six-year graduation rate to 48 percent by 2021 (for the fall 2015 cohort), and then to 50 percent by 2023. The University seeks to ultimately rank in the top 20 percent for peer public universities in its research class, which would presently require a rate of better than 53.4 percent, Tew said.

The University also seeks to increase the six-year completion rate for first generation and ethnically underrepresented groups by 3 percent.

The University plans to bring about such results through continuing to implement and revise a degree completion program developed in 2014. Such efforts will come as part of Eastern’s participation in the Higher Learning Commission’s Student Success Academy.

Key elements of the graduation plan include:

“We seek to give students the ability to make good decisions within each college, which can make a huge difference in their academic success,” he said. “We’ve made advising in each of the colleges more visible and central to students’ experiences.”

Tew notes that academic preparation and planning can vary considerably among each of Eastern’s five colleges, which include the Colleges of Arts and Sciences, Technology, Business, Education, and Health and Human Services.

Easten also opened the Francine Parker Advising Center in the Student Center, a walk-in facility that can offer quick tips and resource guidance to students in that central area of campus. A transfer student advising center also was opened in McKenny Hall.

Other actions to further increase student retention and graduation include:

• Establishing student persistence teams: Each of the five colleges has established specific teams to examine barriers to and opportunities for success in their departments and programs. This will include, for example, four- and six-year program maps, and scheduling patterns to meet student and program needs. These teams are composed of faculty, administrators, staff and students in the college and are focused on issues that are college specific.

• Using newly developed reporting and analytical tools to more precisely measure a variety of student success indicators and keep academic leaders informed on progress and outcomes. IRIM has been working on developing new tools to examine, in more detail and with more explanatory infographics, the various data points associated with student success. All of these tools and reports are available and consistently updated on the IRIM website.

Other reasons cited for the improved graduation rates include a stronger academic profile for incoming students and greater targeted scholarship support.

• Academic profile: Entering students at Eastern are increasingly better prepared for college. For instance, last fall’s incoming freshman class continued a trend of improved GPAs and ACT. The average GPA of incoming freshmen is 3.24, an increase from 3.12 in 2011. Average ACT scores have increased to 22.2 from 21.06 seven years ago.

• Improved student financial support: Eastern has been a leader among state public universities in making college affordable, with special emphasis on first-generation, at-risk, low-income students. A prime example is the Education First Opportunity Scholarships. First introduced in the 2012-2013 academic year, the Education First Opportunity Scholarship (EFOS) is designed specifically for that population.

Combined with a student’s Pell Grant, EFOS provides for full tuition coverage, with no out of pocket funds required to pay for credit hours.

To be eligible, students must have a 3.0 GPA and minimum ACT composite of 20.