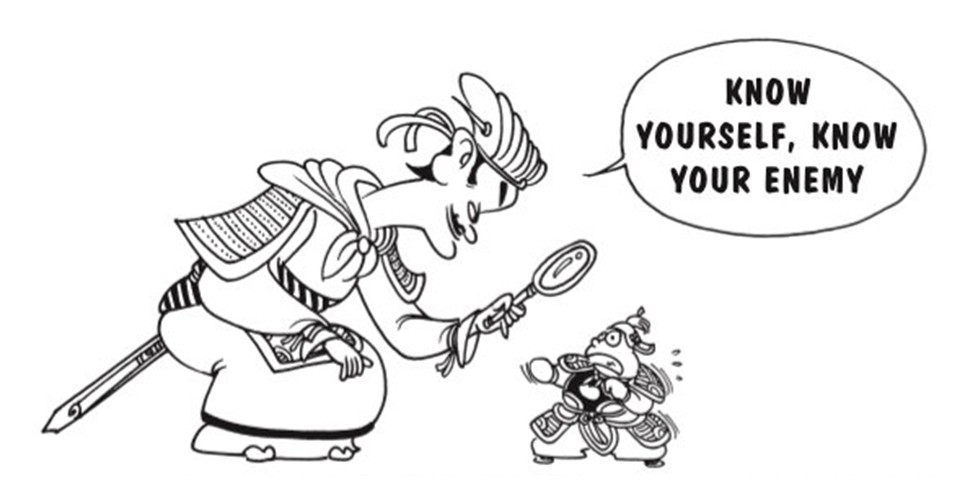 Prodigies in the performing arts, even science, are nothing new, but Brian Bruya was a translation prodigy.

True, the Eastern professor of philosophy didn’t make his mark prior to puberty, as so many wunderkinds do. But he was still an undergraduate at the University of Washington when his first translation was published. And unlike so many early overachievers, his star has only gotten brighter. He’s now in the midst of revising his translations of a series of classic Chinese texts adapted and illustrated by C. C. Tsai, one of Asia’s most popular cartoonists. The latest volume, the warrior-philosopher Sunzi’s The Art of War, was published to wide critical acclaim last year.

Sunzi’s work is one of the most influential books on warfare and strategy ever written, and has attained iconic status not just among military commanders but also for seekers of success in politics, business, and many other fields. Thanks to Bruya and Tsai, it’s now more accessible than ever.

It all started nearly three decades ago, when a youthful Bruya found himself in Taiwan with time on his hands. He had gone there to study Chinese after his junior year at the University of Washington, and the visit he’d planned to last a year had stretched into three.

“I had free time in the evenings with nothing to do, saw C.C.’s books in a bookstore, and started translating them for fun, to improve my Chinese and learn more about Chinese philosophy,” he recalls. “Since I’d gone to the trouble of doing it, I thought I might as well try to get the first one published.”

Tsai’s graphic adaptations were already wildly popular in Asia – they’ve sold more than 40 million copies in over 20 languages – but no English translations had been published in the U.S. By the time Bruya finished his degree, Princeton University Press had remedied that problem by issuing his.

He then switched to Anchor Books, an imprint of Doubleday, which published six more books in The Illustrated Library of Chinese Classics before dropping it in 1998. By then, Bruya had translated 18 books altogether.

“I’m reexamining and revising all of my translations and combining them into larger books,” says Bruya. “A translation should ideally read as if it’s not a translation, as if a native speaker wrote it … to a point. You don’t want to put a whole bunch of English idioms in there that a Chinese speaker would never have used. I tried to make translations that, 30 years from now or 100 years from now, people can still read them and they won’t sound dated.”

The art of translation is tricky enough when it’s straightforward, but this project has an extra degree of difficulty. “The great thinkers of the past wrote in a language we call Classical Chinese,” Bruya explains. “In English, it would be like trying to read Chaucer. C.C. not only illustrated them but rendered them into modern Chinese. I took his modern Chinese and put it into English, but I also worked as much as I could from the Classical Chinese to make sure nothing was lost in translation.”