Eastern Michigan University Professor part of a study that helps determine one element of a dominant and stable society: A steady supply of beer 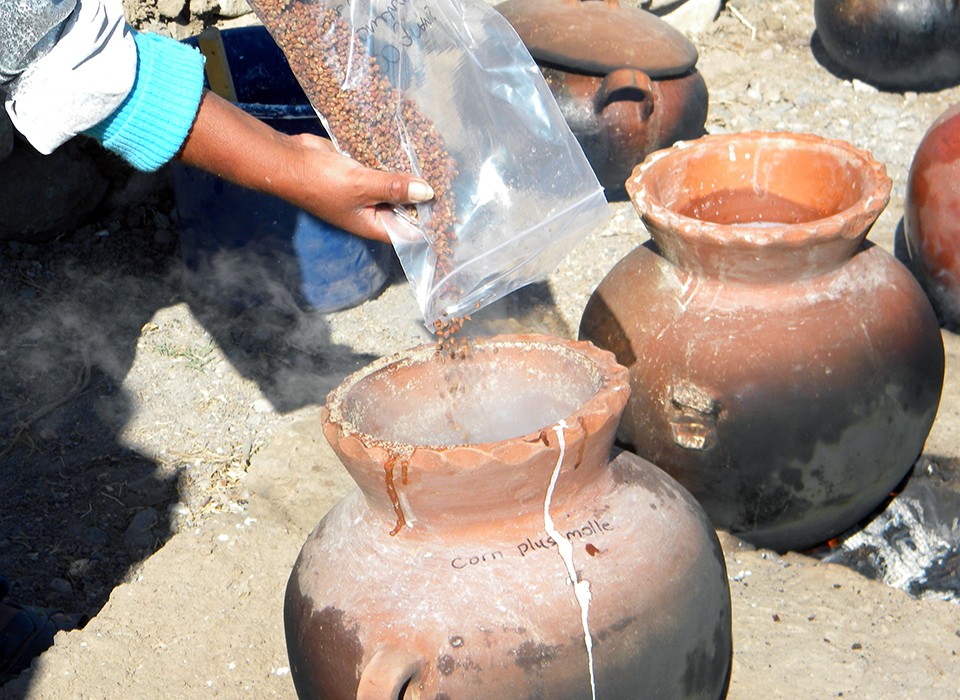 Chicago colleagues of EMU professor Ruth Ann Armitage worked with Peruvian brewers of today to recreate the brewing process used in ancient times, when the Wari empire enjoyed the brewing and social aspects of beer.

YPSILANTI – With all those clever craft beer ads, it’s easy to think beer is a relatively new element of society. Think again. And think a long way back.

A thousand years ago, the Wari empire dominated the South American Pacific coastal country of Peru. The Wari ruled for about 500 years, from 600 to 1100 AD, overseeing a massive north-south stretch of land spanning more than half of that continent’s west coast before the Inca took over the country.

How could such a society flourish for so long a time? A team of researchers that includes Eastern Michigan University Professor Ruth Ann Armitage pinpointed a contributing factor –  the social and work-related elements of producing and enjoying beer.

Armitage and others on the team, which includes lead author Ryan Williams, an associate curator and Head of Anthropology at the Field Museum in Chicago; Donna Nash (Field Museum and University of North Carolina Greensboro), and Josh Henkin (Field Museum and University of Illinois at Chicago) argue that this steady supply of beer could have helped keep Wari society stable. The Wari empire was huge and made up of different groups of people from all over Peru. The group’s paper was published today (April 18, 2019) in the Sustainability Journal.

As reported by the Field Museum, nearly twenty years ago Williams, Nash, and their team discovered an ancient Wari brewery in Cerro Baúl in the mountains of southern Peru. And since the beer they brewed, a light, sour beverage called chicha, was only good for about a week after being made, it wasn’t shipped offsite – people had to come to festivals at Cerro Baúl to drink it.

These festivals were important to Wari society – between one and two hundred local political elites would attend, and they would drink chicha from three-foot-tall ceramic vessels decorated to look like Wari gods and leaders, the Field Museum reported.

To learn more about the beer that played such an important role in Wari society, the team analyzed pieces of ceramic beer vessels from Cerro Baúl. They used several techniques, including a method used by Armitage, to tell what atomic elements make up the sample, and how many. These processes offered clues as to where the clay came from and what molecules the beer was made of.

Armitage’s involvement in the chicha analysis project started when Henkin approached her at a 2014 conference in Chicago. He had worked as an undergraduate at the University of Pennsylvania on biomolecular archaeology projects, and was enthusiastic about applying Armitage’s DART-MS methods to investigate residues on ancient ceramics.

DART stands for “direct analysis in real time.” For the analysis of the brewery ceramics, Armitage ground off a little bit of powder from the sherds and introduced that into the instrument, which immediately gave the group a mass spectrum, a kind of molecular fingerprint.

Other labs use a standard analysis where the whole ceramic sherd would get crushed, extracted over several hours or even days to give a solution, then further manipulated so that it can be injected into an instrument that separates the mixtures – a process that can take an hour or more per analysis before yielding fingerprints for each molecule in the sample, Armitage notes.

“DART is a way to get results fast without doing much to the sample,” Armitage says. “This is important for archaeological samples, where there might not be much material available, or that we want to preserve for the future.”

In September 2014, Henkin paid his own expenses to come with a box of samples to Eastern Michigan from the University of Illinois, Chicago, where he was in the Ph.D. program in pharmacognasy (the study of plants or other natural sources as a possible source of drugs) to undertake just a single day of analysis in Armitage’s lab.

Among the samples were archaeological ceramics that were thought to have traces of either chocolate or a beer made from corn, Peruvian berries related to pink peppercorns, or some combination of corn and those berries.

Armitage performed data analysis in 2014-15, during a sabbatical. But after running some additional control samples that Henkin gave her in spring 2015, she had nearly forgotten about the project over the ensuing months.

Then a friend of one of her research students approached her at the EMU Undergraduate Symposium in spring of 2016, noting she heard all about my project on NPR on Science Friday.

“That was news to me,” Armitage says now, “But the lead authors on the story, Ryan Williams and Donna Nash, were indeed featured that morning on Science Friday and mentioned the archaeological chemistry work that Josh and I were doing with the materials they had provided for analysis.

“Now we are finally publishing the results of our study as part of a larger investigation, using analytical chemistry to see how the elements in the clay that made their cups and the organic molecules from Peruvian pepper berries inside them can help us to understand people and their behavior at the ancient brewery at Cerro Baúl. “

The authors note that the study’s implications about how shared identity and cultural practices help to stabilize societies are increasingly relevant today.

“This research is important because it helps us understand how institutions create the binds that tie together people from very diverse constituencies and very different backgrounds,” says the Field Museum’s Williams, the lead author. “Without them, large political entities begin to fragment and break up into much smaller things. Brexit is an example of this fragmentation in the European Union today. We need to understand the social constructs that underpin these unifying features if we want to be able to maintain political unity in society.”

Armitage says this is likely the first publicized study where DART-MS has been used to look for traces of ancient food residues on ceramics, building on work done at Eastern with undergraduate research student John Hopkins, who graduated in 2013.

“Our group is one of the only groups in the world using ambient ionization mass spectrometry methods to investigate archaeological and historic materials to better understand people and their technology rather than purely for conservation purposes,” Armitage says.

Indeed, the group’s work to determine what kind of glue George Washington’s mother used to repair her ceramics was featured recently in the popular German publication, Der Spiegel.

Armitage’s work has a world reach, but with a highly local benefit.

“Many EMU chemistry students have participated in research projects in our laboratory at this unique intersection of chemistry, archaeology and history,” Armitage says.