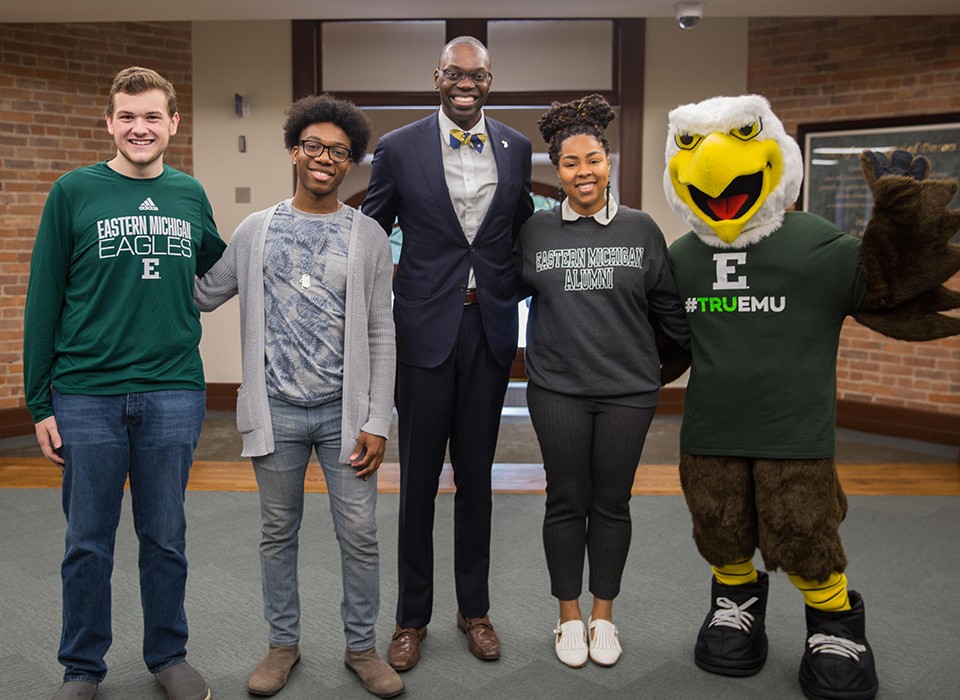 Lt. Gov. Garlin Gilchrist (center) hangs with EMU students and Swoop in Welch Hall during a visit to campus. (Photo by Brynna Bashore)

YPSILANTI – Garlin Gilchrist, Lt. Gov. of the State of Michigan, got a vivid illustration of both the benefits and the potential of how capital outlay funding helps Eastern Michigan University educate students in high-demand career fields during a visit to campus Friday, Oct. 4.

Gilchrist enjoyed a quick tour of newly renovated Strong Hall and Roosevelt Hall, a former secondary school building that now houses programs in the College of Engineering and Technology (CET).

Strong Hall reopened last January as the third and final phase of Eastern’s Science Complex, a facility that places the University at the forefront of STEM Education in Michigan. The $40 million project received $30 million in state capital outlay funds.

The University now plans to seek state capital funding support for renovating Roosevelt Hall, to support the expansion of the CET, which recently added programs in mechanical engineering and computer and electrical engineering.

A grand setting for learning

Standing in the brightly lit, aesthetically pleasing atrium of Strong, EMU Provost and Executive Vice President Rhonda Longworth described the dramatic before and after of Strong Hall, recently transformed from a dark building that had received few improvements since its opening in 1957 to an inspiring and highly functional facility for STEM program education. The building houses the departments of Geography and Geology and Astronomy and Physics, along with about 25 percent of the University’s lab space.

Gilchrist then visited Roosevelt Hall, where Mohamad Qatu, dean of the CET, and Suleiman Asher, director of the CET School of Built and Visual Environments, conducted a tour of facilities including an Information Assurance class, the Department of Military Science and a computer facility.

The Lt. Governor ended his visit by posing for pictures with EMU students Alex Glover, who is studying TESOL and Spanish, and Katie Lane-Waters, a Women’s and Gender Studies major. EMU’s mascot, Swoop, a big fan of state politics and governance, also made an appearance.

Lane-Waters said meeting Lt. Gov. Gilchrist was an amazing opportunity to share her love for Eastern.

“I appreciated his genuine interest in my experience here at EMU,” she said. “I feel like my voice and experiences as a college student are rarely heard and validated by those involved in the government. So for Governor Gilchrist to go out of his way to genuinely listen to my experiences meant a lot to me.”

Gilchrist said he was impressed with the training offered in the CET, singling out the Information Assurance (IA) Program and its strong role in today’s globally connected and often threatening society.

“Cyber security training is a growing need,” he said, noting how institutions such as Eastern Michigan are “rising to the occasion” in providing the education needed to flourish in such vital and fulfilling careers.

Before being elected lieutenant governor, Gilchrist served as a social media manager for the Barack Obama campaign and Director of National Campaigns for MoveOn.org before returning to Detroit as its first-ever Director of Innovation & Emerging Technology.

The Lt. Gov. will soon return to the Eastern campus. He is scheduled to give the keynote address at the annual EMU Digital Marketing Workshop, on Friday, Nov. 15 in the EMU Student Center. He will share his vision for using public data and technology to address the pressing concerns of our state, in a talk entitled “The Best Digital Isn’t Digital.”