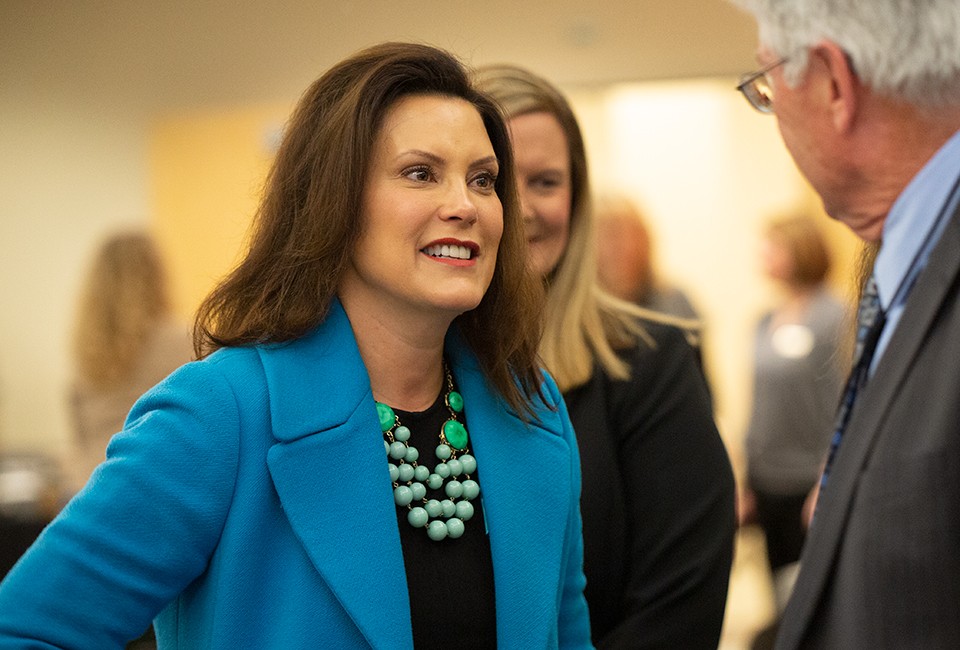 The EMU MLK Humanitarian Award recognizes individuals from within the University and surrounding community who exemplify the values and ideals of Dr. Martin Luther King, Jr., specifically in the areas of advocacy, leadership, and service. The luncheon is part of a week-long schedule of activities honoring the legacy of Dr. King.

Working hard for the people of Michigan

Gov. Whitmer, a lifelong Michigander, has worked or served as a lawyer, an educator, a prosecutor, state representative and state senator.

She was elected to the Michigan House of Representatives in 2000 and elected to the Michigan State Senate in 2006, where she served as the Senate Democratic Leader. In the 2018 gubernatorial election, Gov. Whitmer won all 83 counties in the primary and won the general election with 53 percent of the vote. She earned a bachelor’s degree and law degree from Michigan State University

Since taking her oath of office, Gov. Whitmer has signed executive directives to clean up the state’s drinking water, end discrimination in state government based on sexual orientation and gender identity, secure equal pay for equal work, and expand opportunities for small and disadvantaged businesses.

EMU’s six day MLK Celebration is one of the largest in Michigan, and is attended by many state and regional community leaders. This year’s theme is “Rise Up Against Injustice.”

The luncheon event will consist of the presentation of three awards: the MLK Humanitarian Award, the MLK Student Scholarship Award, and the Evans-Strand Student Peace Award. The Eastern Michigan University Gospel Choir will perform, and this year’s distinguished keynote speaker, Dr. Terrance J. Roberts Ph.D., will provide brief remarks. Individual tickets for the luncheon can be purchased at the MLK Celebration web page.

Roberts, one of the Little Rock Nine who desegregated Central High School in Little Rock, Arkansas in 1957, following the decision by the U.S. Supreme Court in the Brown v. Board of Education case to integrate schools, will deliver his keynote at 2 p.m. Monday, Jan. 20 in the Student Center Auditorium. This event is free and open to the community.

EMU’s MLK celebration will take place from January 16-22, 2020 with a variety of events occurring over the week, including the commemorative march on Jan. 16, the annual Day of Service on Jan. 17, the second annual Gospel Fest Jan. 18, and the showing of the movie “Harriet” on Sunday, Jan.19.