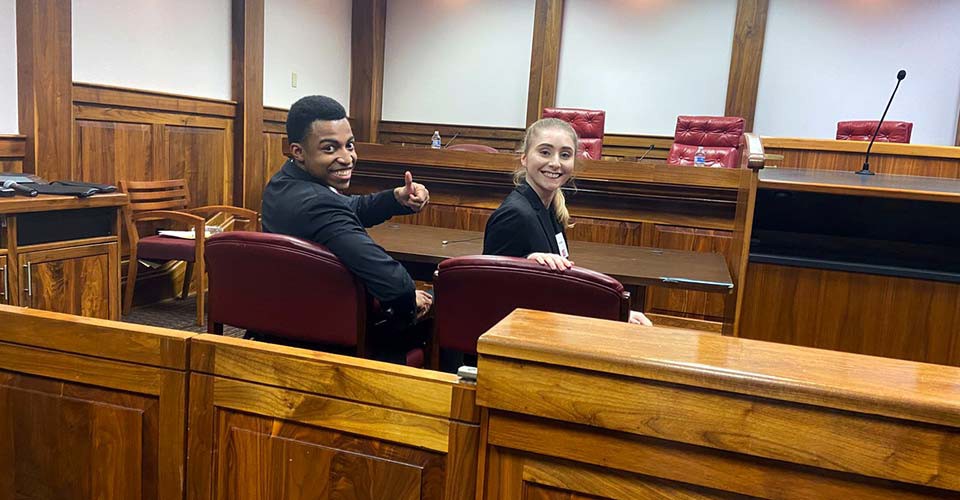 The national competition began earlier this month, with close to 500 universities and colleges – ranging from large institutions to small liberal arts colleges in the U.S. and Canada – seeking to advance.

“This was no small feat,” said Barry Pyle, an EMU political science professor and coach of the EMU moot court and mock trial teams. “This is a very big deal. We are one of a very few public universities to ever win this title.”

Graham said that he and his teammates knew after the first day of competition that they had an opportunity to make a run for the national championship.

“We knew we were being overlooked and underestimated,” he said. “What really set us apart from the other competitors was our presentation skills, which really went over well with the judges in that area.”

Graham, an Ann Arbor native with plans to attend law school, said that the team is extremely proud to bring the first national championship in moot court to the state of Michigan and to EMU.

“Our goal was to prove to the country that we don’t attend Eastern Michigan because we are less talented or less intelligent, but rather because it provides opportunities for us, such as being able to compete in moot court and mock trial.

“The level of attention I would’ve received if I had decided to attend a different university pales in comparison to the attention that professors such as Dr. Pyle have given me.”

Hall, who is from Pinckney, Mich., seconded Graham's assessment. "Dr. Pyle has put his life on hold many times for our mock trial and moot court program," she said. "I cannot imagine where I would be if not for him. This opportunity would not have been possible without Dr. Pyle.”

In addition to the national title, Graham also won honors as the third best orator in the nation, and Monica Laschober, a senior and junior Nicholas Suchezky, both political science majors, received recognition for producing the sixth best written brief in the country. Avery Wright and Blake Mullican competed at their first national tournament and did extremely well, Pyle said.

Pyle serves as co-coach along with C. Robert Dombroski, a former student of his and a local attorney. Together, they’ve experienced great success over the last six years in leading EMU’s teams in mock trail and moot court competitions. David Klein, a professor of political science and department head, also serves as an assistant coach.

Moot court simulates appellate court hearings. Students prepare arguments and make oral arguments as they compete while a group of judges act as active participants, questioning and arguing with the students. The biggest challenge for students is to answer the judges effectively. The final round is captured on a video from the competition. The competition starts 38 minutes into the video, and the EMU students appear at 58 minutes.

Through engaging in simulations in competition with teams from other institutions, students develop critical thinking and public speaking skills, as well as a knowledge of legal practices and procedures.

Founded in 1849, Eastern is the second oldest public university in Michigan. It serves nearly 18,000 students pursuing undergraduate, graduate, specialist, doctoral and certificate degrees in the arts, sciences and professions. In all, more than 300 majors, minors and concentrations are delivered through the Colleges of Arts and Sciences; Business; Education; Engineering and Technology; Health and Human Services; and, its graduate school. EMU is regularly recognized by national publications for its excellence, diversity, and commitment to applied education. For more information about Eastern Michigan University, visit the University's website.