Assembling a performance remotely, studying other groups and composers and developing critical thinking skills among the activities as the show goes on for EMU music students 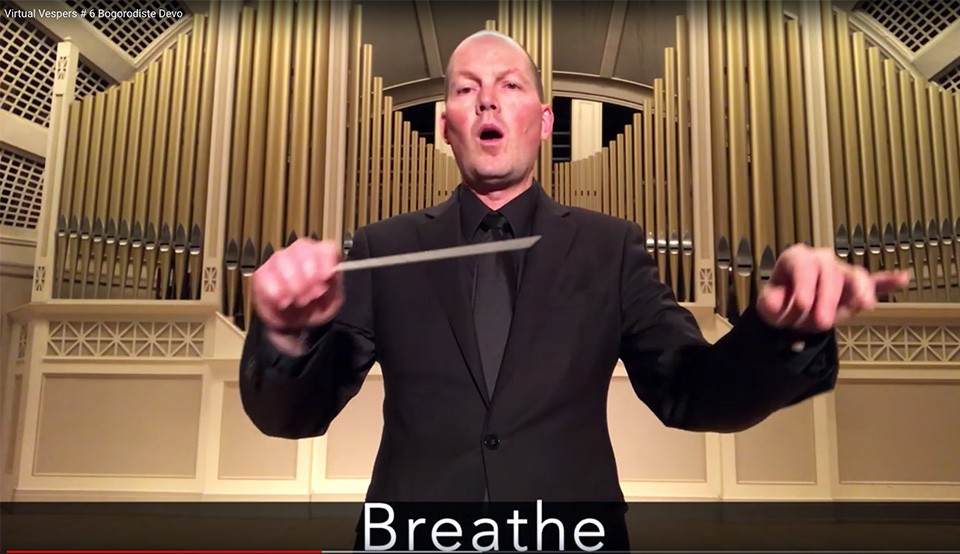 YPSILANTI – As universities across the country moved to delivering classes remotely during the COVID-19 crisis, a lot of orchestra teachers simply stopped teaching. Just give out a grade and be done with it.

After all, how could you replicate an ensemble class online?

But Christopher Barrick, director of the Eastern Michigan University School of Music and Dance, told his faculty he would like to see them continue instruction. To which the various ensemble directors Chad Hutchinson (orchestras), Mary Schneider (bands) and Brandon Johnson (choral activities) readily agreed, despite the challenges involved.

“We all felt in the music department that it was important to continue, to give students this time,” Hutchinson said. “This is a chance to hit the pause button and explore other areas, and to expand their knowledge.”

Schneider says she’s gone through a major withdrawal not meeting with the Wind Symphony, and she often discusses it with her colleague, Chandler Wilson, who feels similarly about the Symphonic Band he directs.

“We spent nearly six hours every week making music together,” she said. “We’re like a giant family - and that is really hard to duplicate through a screen.”

The challenge is this: Most people do not realize that although a large music ensemble can certainly meet via Zoom or other video conferencing platforms like any other class, it’s a whole other thing to have people play their instruments synchronously via remote video. It is extremely labor intensive to prepare and requires all sorts of equipment to do it correctly.

The other aspect of any large music ensemble’s DNA is that of community.

“Much like an athletic team, these students work extensively together, and every single person makes a unique contribution to the success of the group,” Schneider says. “We have seen each other’s souls through music and that creates an intimate bond and sense of community with a unified purpose.

“During times like these, people often turn to the arts to find a sense of humanity, to find hope, solace, and a way to express and process emotions too difficult to put into words. I’ve stressed that point to my students and as musicians, they have a unique role to play.”

In lieu of such dynamics, Schneider, Hutchinson and Johnson have provided a variety of resources and opportunities, in order to create the richest possible framework during this unprecedented time on (and off) campus. 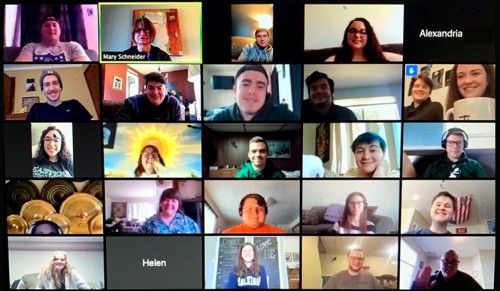 Schneider has enrolled her wind ensemble class in SmartMusic, a platform that allows them to individually play their instruments with provided accompaniment, from piano to full concert band on specific pieces, so they can enhance their practice and simulate an ensemble-like experience at home. She has encouraged each student to make and share a short video.

The group has also taken part in watching live streams of professional music productions (now free) like the Berlin Philharmonic, the Metropolitan Opera and the Detroit Symphony, to name a few. Last week, students compiled and shared detailed lists about their favorite artists on their instrument, including links to performance videos when applicable.

“It was a collaborative learning experience for all of us,” Schneider said. “Discovering new artist-musicians and getting a glimpse into each other’s musical heroes and heroines.”

In addition, the wind symphony will be having weekly guest speakers, including: a performer from a major symphony orchestra, a recognized composer, a master teacher/conductor, and an entrepreneur, who will all share different perspectives about their professional lives in music.

Schneider also plans to have students conduct research for a potential commisioning project that will include listening and critiquing a variety of new symphonic music by young composers, encouraging the students to focus on women and composers of color, who are under-represented in the field.

Hutchinson, who became Eastern’s new orchestra director this past year, is also ensuring his students are practicing self-care.

He is now working with all of his students using Zoom and other technologies. He also made a self care video for his students, and now they are sharing their own self-care ideas on discussion boards within Canvas.

He has played piano pieces for his students (some classical, some jazz) both as a gift to them but also to show them that still performing your own art is very important in these times.

Like the wind ensemble, Hutchinson’s classes are taking advantage of free access to great music orchestras, with weekly listening assignments.

Hutchinson says he and his students have talked a lot about communication, about his interactions with them, and students among themselves.

“Students watch each other,” he said. “They communicate a lot in the normal rehearsal setting. When students watch the videos, they are looking for these characteristics, which is opening a whole new dialogue. Students are time stamping the specific instances and sharing them across discussion boards. With Zoom, you can't play in live time, as the connection and Internet speeds are different for all.

Along that line, students are studying composers of the 21st century, such as Mason Bates, who wrote an opera about Steve Jobs, or Pulitzer Prize winner Caroline Shaw.

Like Schneider, Hutchinson normally sees his musicians six hours a week, building up a powerful rapport. In addition, the group had been gearing up for a major orchestra festival at EMU that would have featured seven high schools along with guest artists and master teachers.

“We were raring to go,” Hutchinson says. “We’ll have to do it next year. It’s going to be a very big and special event.”

While Eastern’s renowned choral groups can’t get together in person, Johnson has introduced students to a special platform that allows them to collaborate in assembling a musical performance number. Welcome to Virtual Vespers. It’s a vivid example of how technology can function for a choral ensemble.

Here is how it works: Johnson posts himself conducting the specific song on You Tube. Students watch Johnson conducting and giving instructions, then record their specific vocal line – soprano, tenor, alto, bass – on the platform.  The voices from each level are uploaded to a file and combined into one track, and then mixed so that the balance is correct.

"The goal is to create something together using our collective vioices and technology," Johnson said. "In fact, the audio editing process is a lot like what takes place in a professional recording studio."

Johnson has invited EMU students and others from all over the world to participate.

“It’s meant to be a way to focus our energies, even though we can’t be in the same room,” he said. “We’re using technology to get our voices to resound together.”

Johnson offers step- by-step instructions to the students on his Facebook page. Indeed, the page is a veritable chronicle of the exciting musical odyssey.

“I’m trying to keep students engaged and creative; this is not just doing busy work for them,” Johnson said. “This allows them to express themselves and feel more connected.”

Are students eager to participate? You bet.

“It’s really exciting to try some of these technologies that are coming around,'' Johnson said. "It’s as close as we can get to replicating the experience of being together and making music.”