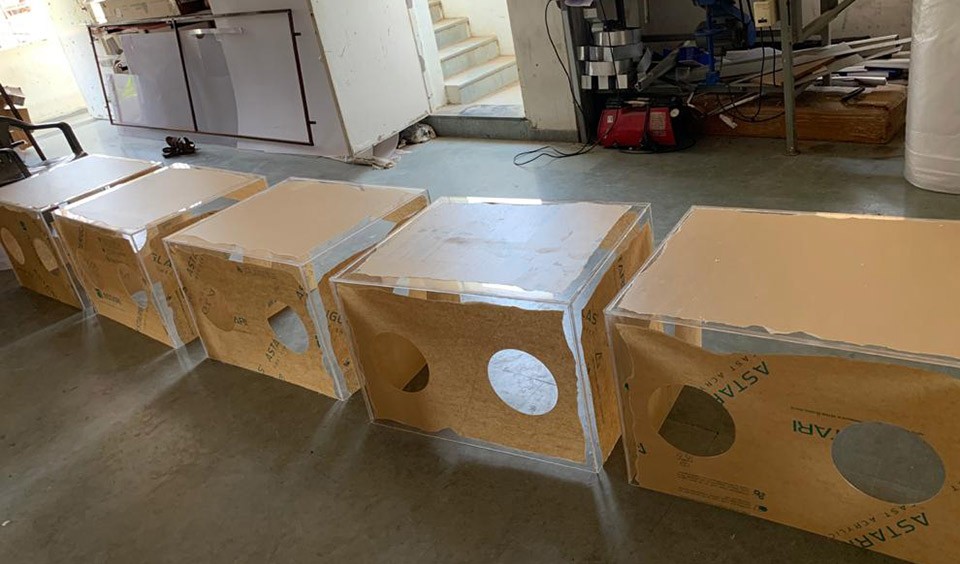 YPSILANTI – The giving spirit of the Eastern Michigan University community during the COVID-19 crisis extends to the other end of the world.

Ankit Soni, a 2009 graduate of the International Business/Entrepreneurship Program at EMU, is making Personal Protective Equipment (PPE) for area healthcare workers from his third-generation family jewelry business in India.

Soni notes that the idea to make PPE came from a personal standpoint. His wife, Heather, is a nurse working in Michigan at present. Soni heard about workers there needing protection earlier this spring and figured out they could manufacture PPE with the resources in his family’s business and distribute it free of charge to nearby hospitals in India.

“My wife is my inspiration and top critic,” Soni says, adding that Heather travels back to the U.S. once a year to help with critical nursing shortages around the country. Soni says the values and support of his parents play a key role as well.

"They always taught me to focus on bettering the lives of others around me, and I am so thankful for that," he said.

The company began manufacturing full PPE kits, including face shields, suits, masks, shoe covers, protective eyewear and face shields. Making a full kit of PPE eliminated the need for individuals to go back and forth in the hospital to get all the items of proper full equipment.

The kit received an excellent response, and doctors in the area soon noted the need for something else – called an aerosol box in India and an intubation box in the United States.

“The doctors wondered if there is a way we could create a chamber with negative pressure, with simple holes on the side and then attaching suction tubes and covering it with tape, so you could intubate patients in normal rooms anywhere,” Soni said, noting that his business quickly began manufacturing that item as well.

Soni lives in Anjar, a historic town in the Kachchh district in the state of Gujarat. For now, his business is limited to distributing PPE in India because of government restrictions on exports.

“Once the ban is lifted, we will be exporting,” Soni said, noting his business has had inquiries from as far away as Europe.

An awesome time at Eastern

Soni said he still draws on his experiences and lessons learned at Eastern, where he met his future wife.

“I’m trying to make use of all the things I learned at Eastern,” he said. “I absolutely had an awesome time there. What I loved about Eastern is that it’s a big school, but at the same time class sizes were limited, and that’s something I really appreciated as an international student. I could access my professors whenever I needed.”

For now, Soni and his company are footing the bill for the PPE they create. Once the restrictions are lifted, he plans to donate 10 percent of any revenues he generates in the United States to a cause designated by EMU.

“We’re still gaining a lot of momentum,” he says of the project’s growth. “There’s a lot of work to do, and I am happy with where we are.”

Soni is learning a great deal, too, about an area in which he had little knowledge – medical consumables.

“You use your common sense,” he said. “You make blunders, but I love making that mistake in order to learn from it. This process teaches you a lot of things.”