What can and should be done: A discussion on the national outcry and demonstrations over the death of George Floyd with Eastern Experts Gregg Barak and Grigoris Argeros 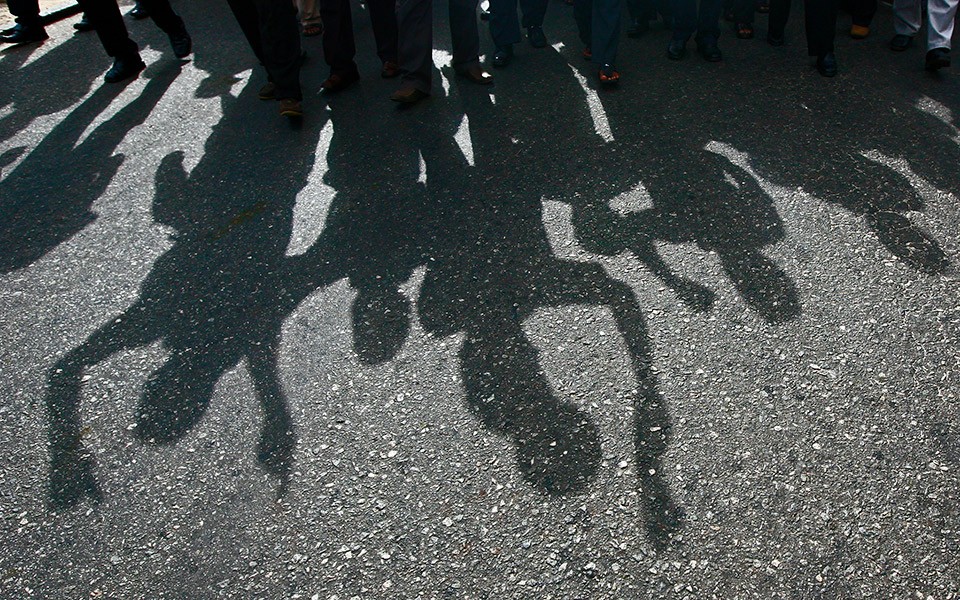 YPSILANTI – The national outcry and protests over the death of George Floyd have stirred great concern over what can be done to move our country to a better place in terms of its systems of justice and disparities in terms of access to resources and good living conditions.

EMU Today spoke with two Eastern Experts: Gregg Barak, a professor of criminology and criminal justice who has written widely about those issues (see related story on this week’s EMU Today); and Grigoris Argeros, a professor of sociology who specializes in urban sociology and demography.

Q and A with Gregg Barak

These protests are about 300 years of unabated unequal treatment under the law, exacerbated by continuing social, political and economic inequality, and immersed in an unrepentant racist system, exemplified by the everyday practices of the U.S. criminal justice system and by the rate of deaths from COVID-19.

These protests are not about the tens of thousands of militantly peaceful protestors, nor are they about a relatively small number of looters, and an even smaller number of arsonists and violent provocateurs.

The point is that these protestors as well as the looters and violent actors should not be the focus of our national discussion. They are all parts of a sideshow, a diversion, and a distraction from the type of police, education, and health care reforms that could begin to address the myriad social and economic problems tearing this society apart.

Q: How does or can the President positively or negatively influence these actions in the streets of America?

Barak: The responses from people in authority, from police chiefs to prosecutors to other elected officials all the way up to the President of the United States, will generally have a positive or negative impact on the actions taken by police and protesters alike.

For example, social scientists have learned a couple of fundamental things from more than 50 years of studying the behavioral interactions of crowds of protestors and crowds of police:

(1) When police respond by escalating force – wearing riot gear from the get go, or using tear gas on protestors – it does not make things better, rather, it makes them worse as each side tends to up the ante and so on and so forth.

(2) While de-escalation through empathy and negotiation does not always work to quell the violence, it is usually better than the alternative. However, since the World Trade Organization protests in Seattle in 1999 when negotiated management fell apart, the U.S. decided that it needed to be "smarter, quicker, and tougher" with the protesters. So with what we know about political protests, enters President Trump doing precisely what is not called for.

As most people know, including many of his supporters, Trump could not care less about the rule of law, justice of any kind or the Bible that he used early Monday evening, moments after he had Attorney General William Barr order the attacking, gassing and shooting of thousands of peaceful demonstrators, so he could cross the street for a photo op and pretend that he is a “law and order” President. Nothing could be further from the truth.

Q: How are these protests and the rioting different or similar to the many uprisings in the mid-1960s, and particularly in 1968?

Barak: Protests, riots, and rebellions often have underlying similarities, as they are usually in response to some kind of fundamental, institutional, or systemic inequalities, injustices, discriminations, lack of rights, etc. that are usually protected by the "laws of privilege" masquerading as laws of fairness.

As for the contemporary protests over Black Lives Still Not Mattering in the U.S., there is much in common today with the ghetto rebellions in Detroit, Chicago, and Watts in the 1960s. These are all about the same kinds of civil and human rights being denied to blacks in particular – then as now – not much if any progress has been made in most "occupied" communities in the U.S.

Barak: A small number of officers have been overzealous, to say the least, such as when the cops tasered two students sitting in a car watching the action in Atlanta, or shooting rubber bullets at reporters, or arresting at least two black journalists who had identified themselves as such. On the other hand, we had chiefs of police and their forces in Camden, New Jersey, and in Flint “taking one knee” and walking side by side with the protestors.

Q: What systemic police policies are needed to avoid incidents such as the George Floyd killing?

Barak: This is an easy question to answer. The adoption of the policies recommended in President Obama’s Task Force on 21st Century Policing would be a good place to begin. Unfortunately, Trump and his first Attorney General, Jeff Sessions, tossed those guidelines out the door, not unlike the Trump Administration tossing out Obama’s Pandemic Playbook.

Sessions also undid the numerous consent decrees between the Department of Justice and local police departments as a means of reducing police violence. We, of course, need a national policy for all police departments that will constrict the use of deadly force and other forms of police brutality, such as choke holds.

Q and A with Grigoris Argeros

Q: To what degree are differences in opportunity and living conditions a cause of the protests around the country this week along with concern about the death of George Floyd?

Argeros: While it is hard to suggest a specific cause, past and current research can serve as a guide into the possible underlying processes that may have and still fuel the ongoing protests. While the death of George Floyd was the impetus for the demonstrations, I believe there are also other underlying issues at stake as well.

We must not forget that we do not live in a vacuum; instead, we live in a circle (called society), that consists of different and various components, i.e., institutions and all the accompanying ingredients needed for each institution to function.

Therefore, the death of George Floyd should be placed in the broader context of our socioeconomic, demographic, political, and cultural reality. The following factors represent a few important elements that can further exacerbate the rising tensions happening across the nation:

All of the above are enmeshed in the complex dialectical notions of power and how resources are distributed.

Research on residential attainment reveals that socioeconomic resources, such as education and income, do not necessarily translate into residing in neighborhoods with qualitatively more desirable resources, like educational quality and access to other resources that improve quality of life.

This varies by both class and race. In other words, socioeconomic status resources fail to minimize differences by race/ethnicity. For example, there are studies that reveal that higher income Blacks reside in neighborhoods similar to those of where middle/lower class white folks reside. To the extent that the American Dream is exemplified by location and owning a house, then it’s a dream for some and a nightmare for others.

Q: What do people need to understand about the degree of disparities regarding access to resources and other basic needs in various areas of the country?

Argeros: Access to resources (housing, jobs, and health insurance for example) are not equally distributed; instead they vary by race, class and sex. Multiple studies reveal that when we adjust/control for differences in socioeconomic status, race/ethnicity differences continue to remain.

The key to the above is to view an issue, for example, the George Floyd killing, from a structural perspective. Not that individual behavior does not matter, but a lot of the outcomes we see in our society, pertaining for example to police brutality and housing discrimination, occur in systematic fashion over an extended time period.

So, OK, fine. The officers involved might get charged and locked up – but so what? If we don’t change the institutional patterns and mechanisms that gave rise to such actions, I’m afraid we might have more such incidents.

Q: What can local, state and federal government do to rectify these disparities?

Argeros: This is very complex matter and there is not a simple solution, because it varies by location in terms of nation, state, city, town, etc.

We could start by what we already have. For example, and with respect to housing, we can further strengthen federal housing laws and the social safety net to allow all racial and ethnic groups to achieve a locational outcome commensurate with a decent quality of life. This is because past and current studies reveal that where one lives plays a huge role in future socioeconomic and health outcomes.

Q: Are we, as nation, improving in reducing these inequities?

Argeros: One of my undergraduate professors would always say in class “one step forward, two steps back” when it came to issues related to social justice, especially racial justice and access to resources.

While the racial socioeconomic status gap has definitely decreased since at least the Civil Rights Movement of the 1960s, it seems that we set ourselves up to moving two steps back when it comes to further minimizing the gap.

For example, the failure to truly enforce the 1968 Fair Housing Act further exacerbates racial/ethnic differences in housing. While tolerance to reside in more racially diverse neighborhoods (in terms of attitudes) has increased since the 1960s, in practice that is not the case. We are still a highly, albeit declining, segregated nation by race, although it varies by location.

Finally, but not least, there’s another important document that was borne out of the racial riots in the nation during the 1960s, the Kerner Commission Report. We can always go back to his report and apply its recommendations.

One of the key conclusions of the report is that “Our nation is moving toward two societies, one black, one white – separate and unequal.”  I’d say that our nation’s racial and ethnic arrangement presently reflects the above conclusion.

On EMU Today next week: A conversation, with the national protests as backdrop, about needed educational reforms with Rema Reynolds, an EMU professor of leadership and counseling and an expert on educational systems and developing school leaders.