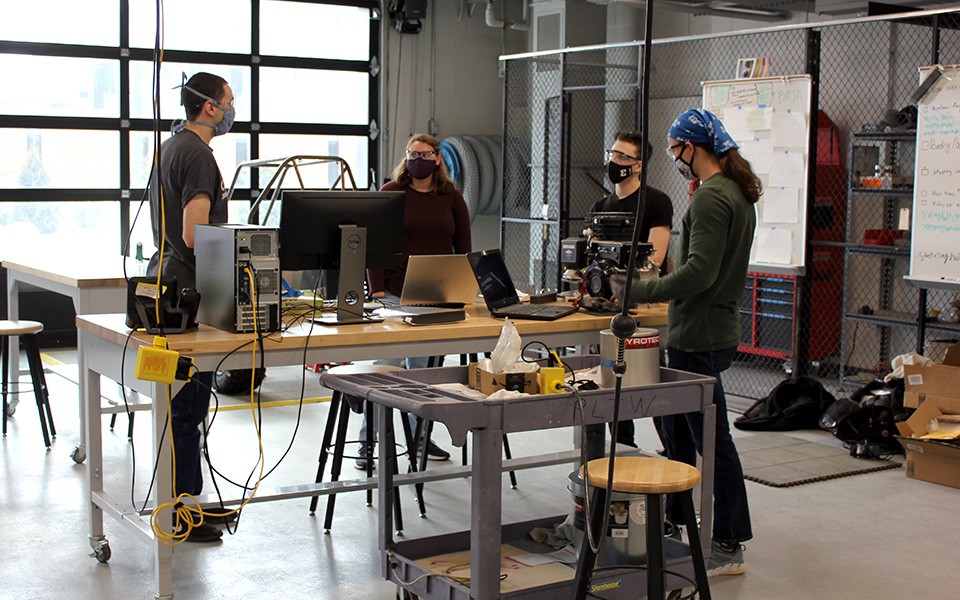 YPSILANTI – In March 2020, the Eastern Michigan University student Baja racing team was gearing up to compete in the Louisville Baja SAE national competition. They were hard at work building and making improvements on the EMU Baja car in hopes of taking a win at the competition to take place a couple months later—until the pandemic hit.

While the competition was moved virtually, the team competed, without driving the car they’d worked so hard on. The team placed 44th out of 100 in the virtual event by presenting their design and business plans to a panel of judges. While the experience was still beneficial to the team, it was a disappointment to not be able to drive the car.

Fast-forward to today, and the Baja team has their sights set on a 2021 victory even more than ever before. And their chances are strong, with more experience and a $5,000 Ford Motor Company Fund grant to help them get there.

Ford has been a valued sponsor of various EMU initiatives over the years, including the Baja racing team. This year, the team has received a $5,000 grant through the Ford College Network, an initiative of the Ford Fund, to provide three student scholarships to the Baja racing team officers, and will help with recruiting efforts for the team. The remaining money will be put toward parts and materials for the car.

“Our workforce depends on having skilled and motivated students such as those on the EMU Baja Team that are able to innovate, adapt, compete, and win in today’s economy,” said Farah Harb, global education programs analyst for Ford Motor Company Fund. “They were resilient and came together as a team even during trying times. We are a proud sponsor and look forward to their future success.”

The Ford College Network (FCN) is an initiative managed by Ford Fund that supports the company’s U.S.-based recruiting colleges and universities. This is the third year that Ford has supported the EMU Baja racing team.

When the 2020 competition was moved virtual, the EMU team decided to move forward participating in the virtual design and sales portions of the competition—and even though they didn’t get to drive the car, these virtual components of the competition gave the team valuable insight and lessons learned to improve their strategies ahead of the 2021 competition.

The team also retained the same student captains that served as captains during the 2020 virtual competition, giving the team the advantage of having leaders familiar with the competition processes, regulations, and qualifications.

And in addition, SAE rolled the 2020 competition rules over to the 2021 competition, so the team is able to continue where they left off building the car, giving them more time to perfect some of the components of the design.

“Even though we had been looking forward to racing in 2020, the virtual competition was still so valuable for us ahead of this year’s race,” said Joseph Raus, president of the EMU Baja racing team. “Not only did it give us insight into what the 2021 competition might look like, it gave us the information we needed to make improvements in our strategy and car for 2021.”

The team and the car

The team, which is composed of 13 active students, is currently hard at work making improvements and upgrades to the car, including correcting the rear width of the vehicle and modeling the drivetrain successfully. The officers have divided the team into smaller sub teams to focus efforts on various projects and reports that need to be completed before race day.

“We were able to get more organized over this past summer and are looking forward to getting our vehicle moving for the competition,” said Zac Lowery, vice president of the EMU Baja racing team.  “While we have not been able to get into the shop to work on the vehicle, yet, we have been working on designs, improving our processes, and working on our subdivision of tasks.”

According to its website, Baja SAE® consists of competitions that simulate real-world engineering design projects and their related challenges. The 2021 competition will take place May 20-23, and will take place in a Hybrid Model.

Operating the 2021 competition season using the hybrid model will allow for any international team to participate in the competition by participating in the Baja SAE Knowledge Event if travel bans and closed borders remain an issue.

For the competition, engineering students are tasked to design and build an off-road vehicle that will survive the severe punishment of rough terrain.  Each team's goal is to design and build a single-seat, all-terrain, sporting vehicle whose structure contains the driver. The vehicle is to be a prototype for a reliable, maintainable, ergonomic, and economic production vehicle which serves a recreational user market.

The object of the competition is to provide SAE student members with a challenging project that involves the design, planning and manufacturing tasks found when introducing a new product to the consumer industrial market. Teams compete against one another to have their design accepted for manufacture by a fictitious firm. Students must function as a team to not only design, build, test, promote, and race a vehicle within the limits of the rules, but also to generate financial support for their project and manage their educational priorities.

All vehicles are powered by a ten-horsepower Intek Model 19 engine donated by Briggs & Stratton Corporation. For over 40 years, the generosity of Briggs & Stratton has enabled SAE to provide each team with a dependable engine free of charge. Use of the same engine by all the teams creates a more challenging engineering design test.