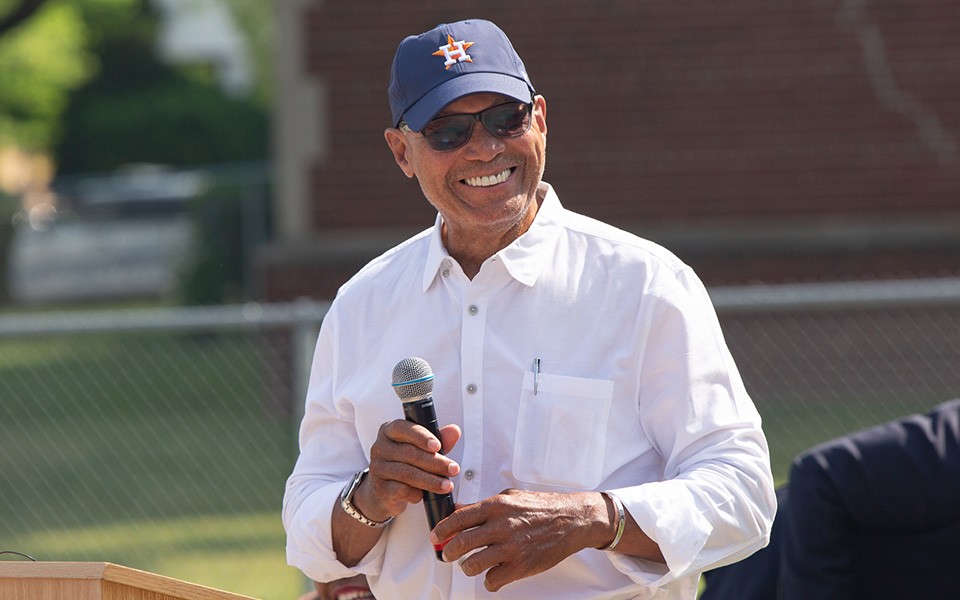 The event was hosted at Hope Academy in Detroit, an EMU charter school that is one of the schools that has benefited from the STEM outreach efforts.

“Hope Academy is one of the seven sponsored schools in the Metro Detroit area that benefited from practical STEM learning during COVID,” said Hope Academy Principal Dr. Mark Mayberry. “This joint outreach effort was an example of how higher education can facilitate learning for tomorrow's STEM workforce. By bringing hands-on learning to middle school students, we are helping build a pathway to higher education and STEM careers of the future.”

“We’ve embraced STEM here at Hope Academy as part of our culture, and our students are flourishing as they participate in these programs,” Dr. Mayberry continued. “As we move through the pandemic, we’re emerging stronger. We’re emerging smarter. We’re emerging more determined than ever to provide the very best resources for our children and families academically and personally.”

Eastern Michigan University President James Smith followed Dr. Mayberry, giving thanks to all those involved in the STEM programming efforts, and offering a warm welcome to all those in attendance, including state government officials, GameAbove members and esteemed EMU alumni, Reggie Jackson and the Mr. October Foundation, Hope Academy leadership, other K-12 school partners involved in the STEM outreach, and EMU leadership and Board of Regent members.

“I’m incredibly excited to be here with all of you today. Please know, we say this often, but it's not a cliche, Eastern Michigan University is your university,” said President Smith. “If we can be of help to you, as I hope we are to the students here at Hope Academy, reach out to us, let us know. We’re here to listen.”

Following Smith’s remarks, Alicia Bell, Chair of the Wayne County Commission, spoke of the success of the program.

“Even through the challenges of COVID, they have succeeded in bringing enriching, hands-on programming to kids throughout the Detroit Metro Area,” said Bell. “At a time where learning was one dimensional for students, this program brought substance to learning with tangible projects. It was able to deliver over 2,000 hands-on STEM kits to students, changing their perspective on the subjects science, technology, engineering and math. This program is setting up students for success in high school and beyond.”

Kristen Young, GameAbove advisory board member, EMU alum, current director of Software Engineering for GE-Aviation, and volunteer in advocating for and promoting K-12 STEM education, then shared some of the positive effects that the hands-on STEM outreach has had on students. She shared a testimonial from a student that stated the programming has changed her mind about considering a career in STEM and has allowed for the opening of new paths and opportunities for her.

“The program was a success and GameAbove will again contribute to STEM education efforts, donating $250,000 to the Mr. October Foundation to continue providing an exceptional STEM learning program to young women and men in the Detroit area.” Young finished.

Reggie Jackson spoke last, sharing more about the Mr. October Foundation STEM efforts and the importance of giving more young students across the country access to hands-on STEM programming—particularly urban areas where it is especially lacking.

Jackson also welcomed EMU alum and NBA legend George “The Iceman” Gervin to say a few words. His remarks focused on the need for a team to come together, much like in sports, to support a project such as this in order to be successful.

Dr. Mayberry concluded the event, thanking all partners and stakeholders for attending.

Reggie Jackson started the Mr. October Foundation for Kids over 20 years ago with the goal of helping to “bridge the digital divide” for the benefit of disadvantaged young people whose circumstances hampered their ability to achieve the goal of a good education. Jackson has never forgotten his father’s words: “Sports are great, son, but your legs will give out someday. Get an education; no one can ever take that away from you.”

At GameAbove, our primary focus is to help shape, inspire and support the current and future students of Eastern Michigan University by reaching new heights in learning through transformation and inspiration in the educational experience. Together, we will strive for that next level of success with a GameAbove all others. The GameAbove family of organizations will also help improve the higher education experience by exploring and supporting the use of innovative financial models to sustain universities, creative giving within the community, enhancing the campus environment, elevating athletics, and promoting pioneering academic programs. www.gameabove.com

About The Mr. October Foundation

The Mr. October Foundation was founded in 1997 by Reginald Martinez “Reggie” Jackson with the goal of helping to bridge the “digital divide” for the benefit of disadvantaged kids whose circumstances hamper their ability to achieve the goal of a good education. Mr. Jackson is a retired Major League Baseball right fielder who played from 1967 to 1987 for the Oakland A’s, Baltimore Orioles, New York Yankees and Los Angeles Angels. Mr. Jackson, nicknamed “Mr. October,” is a 14-time All-Star, five-time World Series champion and two-time World Series MVP. He was inducted into the Major League Baseball Hall of Fame in 1993. www.mroctober.org