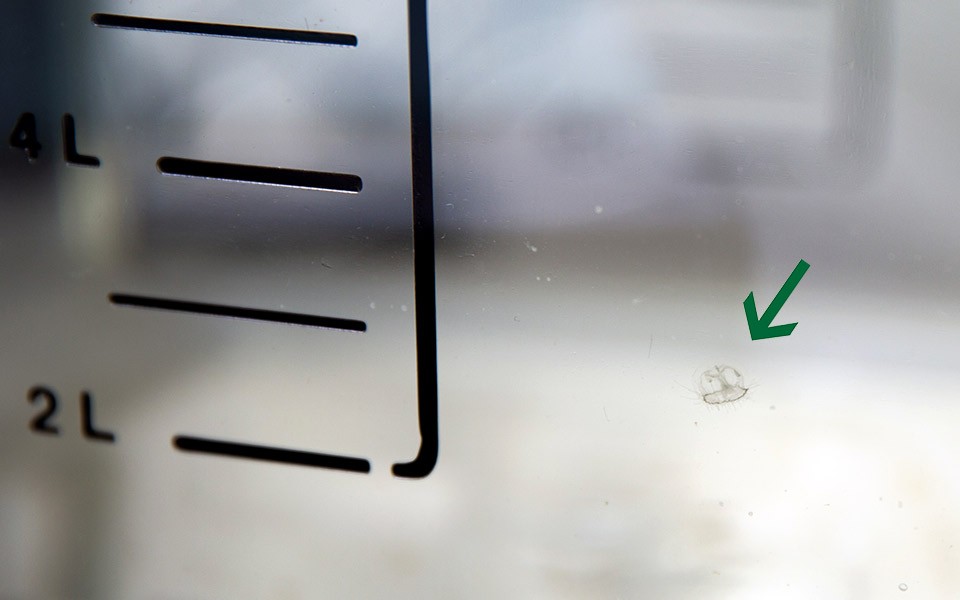 A tiny freshwater jellyfish (indicated by green arrow) swims in a beaker in the EMU Biology lab.

YPSILANTI— Eastern Michigan University expanded its course catalog this fall by adding a course on studying freshwater jellyfish, including researching the organisms in a local lake.

“Knowledge gained through research is such a fundamental aspect of biology,” said Cara Shillington, professor of biology at Eastern. “This class gives students a better idea of what it means to be a scientist and allows them all to take ownership of that title.”

Students have the opportunity to conduct research in the biological sciences and engage in fieldwork in an aquatic environment. According to Shillington, through this course, they will create research questions, review literature, and propose projects studying jellyfish for future semesters.

Rachel Koski, a graduate student in the biology program at Eastern, said she always wanted to study marine biology and to study an organism typically associated with the ocean was an amazing experience.

“Freshwater jellyfish are an invasive species that are now found on every continent except Antarctica, but their appearances each year are somewhat unpredictable, making it difficult to collect data,” said Koski. “In comparison to other species of jellyfish, there is a lack of literature on freshwater jellies, so being able to research them and gain more knowledge about their ecology and distribution is awesome.”

Kyle Martin, a senior at Eastern majoring in environmental science with a concentration in environment and society and a minor in zoology, said he signed up for the course because he wanted to gain additional experience conducting fieldwork in a research setting as part of his thesis and upcoming internships. “I wanted to learn more about one of the most astonishing and unknown species in some Michigan lakes. As a native of Ypsilanti, I always enjoy learning about the various organisms that live here.”

Students this semester are back in the classroom after being out in the water observing and filming the jellyfish in a local lake. Shillington said there are very few long-term field studies on these animals and plans to offer this course every fall semester to coincide with when the jellyfish activity is at its peak.

The organisms are most easily identified in the form of a small, bell-shaped jellyfish known as a hydromedusa. According to the United States Geological Survey, these jellyfish have been reported in Michigan since the 1930s.

“I was able to swim alongside fish and freshwater jellyfish while they were in their natural habitat – an experience that wouldn’t be possible if it weren't for this course,” said Martin.