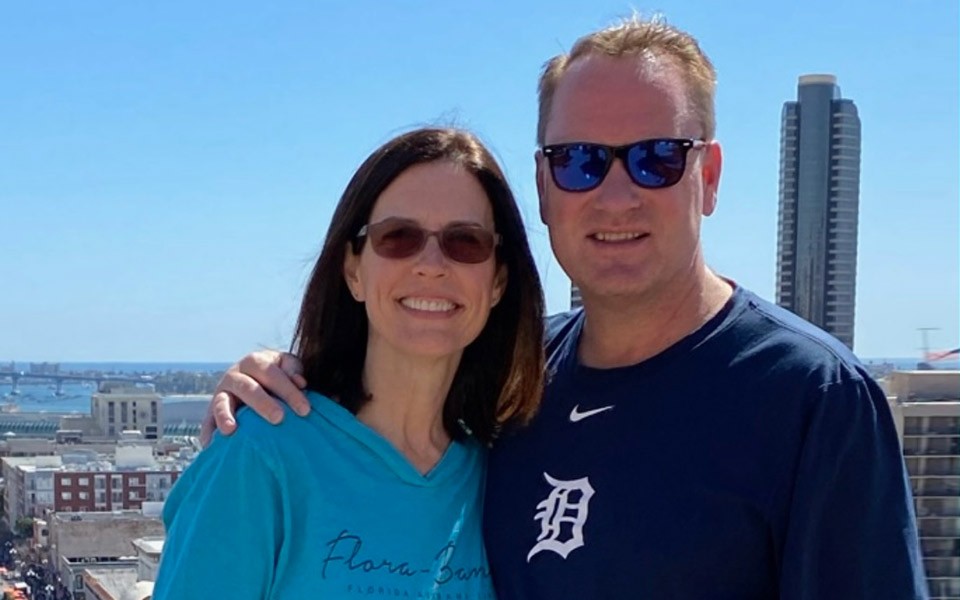 Regent Chad Newton, right, and his wife, Rhonda, left, are both EMU alumni.

YPSILANTI - The next time you safely depart from or arrive at Detroit Metropolitan Wayne County Airport, take a moment to appreciate the work of Chad Newton [BS96, MA11] and his team.

As if managing an entity that has a $10 billion economic impact on southeast Michigan weren’t enough, Newton also lends his expertise to EMU as a member of its Board of Regents, which he joined in March 2021.

“Serving Eastern is a privilege,” says Newton, who was also a member of the EMU Alumni Association Board of Directors. “I care a lot about the students, faculty, and staff, just as I do for my airport authority team. I hope the legacy of my career and time as a Regent is one of a person who put others first.”

Newton grew up in Belleville in a single-parent household along with his two brothers. He gained an appreciation for a strong work ethic from his mother.

“I came from very humble beginnings,” Newton says. We often did not have a lot of money and my mother had to make many sacrifices in order to provide. Raising three boys, with no father in the home, was a very difficult and challenging task.”

After graduating high school, Newton joined the Army as a military police officer.

“My goal was to become a chief of police,” he says. “After being honorably discharged, I became a deputy sheriff with Wayne County. I never intended to go to college. But my wife Rhonda [an EMU alumna who teaches math at Salem High School in Canton] insisted that I pursue a college degree. I give her a lot of credit for helping me set high goals for myself.”

In an era before online learning, Newton studied year-round while working the midnight shift and driving from downtown Detroit to Ypsilanti for classes. He earned his bachelor’s degree in Criminology and Criminal Justice.

Afterward, Newton was assigned to Detroit Metro Airport, where he rose through the ranks, eventually becoming the vice president of Public Safety. He also earned a master’s in Technology Studies with a specialty in Law Enforcement from Eastern and completed a certificate program with EMU’s School of Police Staff and Command.

Newton’s next academic pursuit had a career-altering impact.

“I wanted to have a better understanding of the functionalities of an airport beyond public safety,” he says. “I took an accredited executive program through the American Association of Airport Executives. After studying hard for nearly two years, I earned my accreditation after completing the required levels, which includes a three-hour oral board in front of a board of examiners. It was the most difficult challenge I’ve ever pursued academically. I’m the first CEO at Metro Airport to achieve this accreditation.

“Besides maintaining a world-class airport, I want to help make a difference in the lives of the people who work here. Each member of our team is more important than our organization. I want them to take care of their family first but also give their best here each and every day. That helps create an environment where people want to work hard and thrive.”

Newton says his experiences as CEO have helped him manage tough issues that come before the Board of Regents.

“When you get a seat at the table, you realize there are difficult matters to handle,” says Newton, who lives in Plymouth. “We put a lot of thought and deliberation into decisions we know will have an impact on students, faculty, and staff.”

Newton graduated from the FBI National Academy in 2015, which was the highlight of his law enforcement career. In addition to being involved with his church, Newton enjoys attending sporting events and spending time with his wife and family. Both of his adult children are happily married and also attended EMU.

Newton’s term as a Regent expires in December 2026.