YPSILANTI – Eastern Michigan University administrators will both lead and participate in wide-ranging discussions focused on ending sexual assault on college campuses during a statewide summit at the University of Michigan on Friday, Sept. 30. 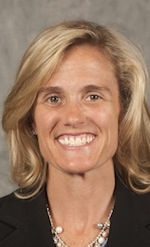 EMU vice president and athletic director Heather Lyke will kick off the summit’s program by moderating a panel that will address how universities can partner with their athletes and athletic departments to equip them with knowledge about sexual assault awareness and prevention. The discussion follows welcome remarks by First Lady Sue Snyder, Governor Rick Snyder and their daughter, Kelsey, a student at U-M.

Speakers from Ferris State and Michigan State universities will also share  their individual efforts during that breakout session, which runs from 9:50 a.m. to 10:40 a.m.

Out of 22 Michigan universities and colleges receiving grant funds for last year, EMU’s SMART proposal received a grant of $53,926 in Nov. 2015, the second highest amount awarded to any of the grantee institutions. Grants have yet to be determined for this year.

“While all the campuses are targeting the general population in their outreach campaigns, Eastern Michigan has been specifically cited for involving and focusing on specific groups in its efforts, such as student athletes, the LBGTQ community, the Honors College, Students of Color and the Greek system,” Gold said.

Founded in 1849, Eastern is the second oldest university in Michigan. It currently serves 22,000 students pursuing undergraduate, graduate, specialist, doctoral and certificate degrees in the arts, sciences and professions. In all, more than 300 majors, minors and concentrations are delivered through the University's Colleges of Arts and Sciences; Business; Education; Health and Human Services; Technology; and, its graduate school. EMU is regularly recognized by national publications for its excellence, diversity, and commitment to applied education. For more information about Eastern Michigan University, visit the University's website.