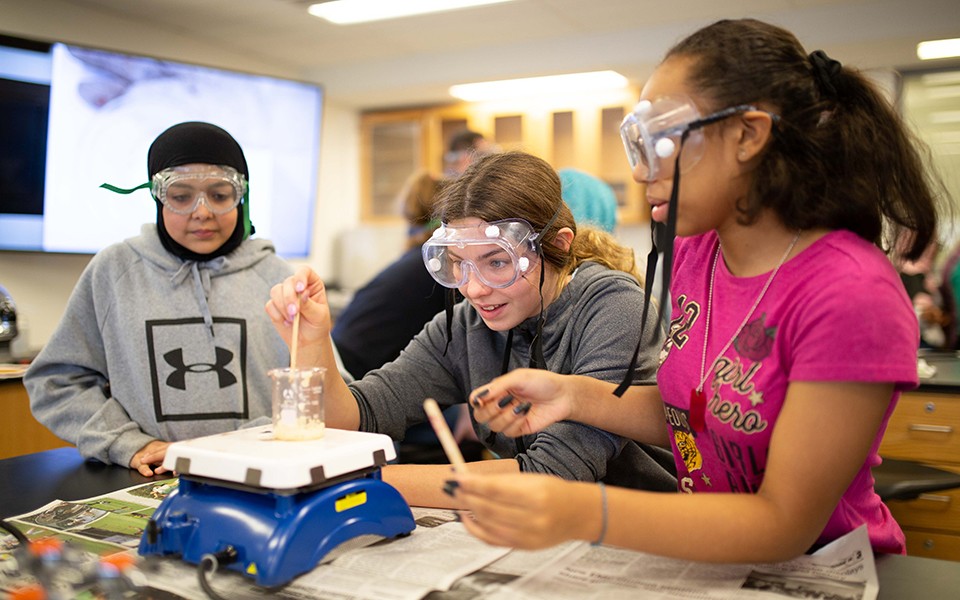 Digital Divas, which began in 2010 as a twice-a-year conference for middle and high school girls, will now expand to include after-school sessions, summer camps and other events to provide more opportunities to build STEM (science, technology, engineering and math) skills and knowledge in a space where individuals can explore and build their interests while becoming familiar with life on a college campus. The additional funding and collaboration will also support the recent addition of a “Digital Dudes” program, targeting at-risk young men in inner cities by engaging them in hands-on learning and exposure to a college campus in hopes to improve high school graduation rates and help them plan a pathway to college.

“The past decade has witnessed explosive growth in the technology industry, yet a significant gender gap remains. Women are missing out on this entrepreneurial success. GameAbove and the Mr. October Foundation are coming together to help change this disparity,” said Denis Wolcott, GameAbove spokesperson. “Digital Divas, and now Digital Dudes, are wonderful opportunities for young people to achieve their dreams.”

“I’m very excited and appreciative of our new partnership with GameAbove and Eastern Michigan University,” said Reggie Jackson, founder of the Mr. October Foundation. “Detroit has always been a target for me since I’ve played there and learned of the need they’ve had for a focus on education among the younger generation – a generation that soon will be making the decisions for our future.”

Through the initiative announced today, GameAbove will provide up to $500,000 annually to expand Digital Divas’ programming beyond the twice-a-year conferences, underwrite the program’s executive director salary and provide scholarships to attend EMU. The Mr. October Foundation will provide additional curriculum and educational assistance to targeted schools in Detroit and other Southeast Michigan communities. GameAbove, whose advisory board is filled with successful entrepreneurs dedicated to enhancing the academic experience within EMU and the surrounding communities, found a perfect partner in the Mr. October Foundation with a shared vision: To see young people succeed.

“On behalf of the faculty and supporters of Digital Divas, we are grateful for this generous funding and commitment to our program,” said Bia Hamed, Digital Divas Program Director. “This collaboration will benefit so many more female and male students from inner cities, from rural communities, and from low socioeconomic areas and historically disadvantaged school districts. We look forward to reaching more young people and inspiring them into STEM courses and careers.”

According to an American Association of University Women research report, a combination of stereotypes, gender biases, and values result in women often reporting that they don’t feel as if they belong in engineering and computing fields. Less than 20 percent of computer science degrees went to women in 2017 and the numbers are lower for minority women, according to another report. To correct this disparity, EMU’s College of Engineering & Technology launched Digital Divas to inspire and provide positive role models and experiences for girls.

Over the past few months, GameAbove has donated more than $13 million to academic, athletic and supportive programs at Eastern Michigan University. Previously announced gifts of $3.5 million to EMU include the “GameAbove, Faculty First” initiative to support faculty development and the “Students Matter Most” grant to assist the academic and program needs of current and future students.

At The GameAbove, our primary focus is to help shape, inspire and support the current and future students of Eastern Michigan University by reaching new heights in learning through transformation and inspiration in the educational experience. Together, we will strive for that next level of success with a GameAbove all others. The GameAbove family of organizations will also help improve the higher education experience by exploring and supporting the use of innovative financial models to sustain universities, creative giving within the community, enhancing the campus environment, elevating athletics and promoting pioneering academic programs. www.gameabove.com

About The Mr. October Foundation

The Mr. October Foundation was founded in 1997 by Reginald Martinez “Reggie” Jackson with the goal of helping to bridge the “digital divide” for the benefit of disadvantaged kids whose circumstances hamper their ability to achieve the goal of a good education. Mr. Jackson is a retired Major League Baseball right fielder who played from 1967 to 1987 for the Oakland A’s, Baltimore Orioles, New York Yankees and Los Angeles Angels. Mr. Jackson, nicknamed “Mr. October,” is a 14-time All-Star, five-time World Series champion and two-time World Series MVP. He was inducted into the Major League Baseball Hall of Fame in 1993. www.mroctober.org

Digital Diva’s mission is to provide a venue for connecting middle and high school women with careers in STEM through: Introducing young women to careers in technology, recruiting women into technology majors, breaking down gender stereotypes regarding tech careers, creating awareness of safe online interactions, and encouraging ethical behaviors in digital spaces. The program now also reaches young men in disadvantaged communities as a pathway to college and escape poverty. www.emich.edu/digitaldivas

About Eastern Michigan University
Founded in 1849, Eastern is the second oldest public university in Michigan. It currently serves nearly 18,000 students pursuing undergraduate, graduate, specialist, doctoral and certificate degrees in the arts, sciences and professions. In all, more than 300 majors, minors and concentrations are delivered through the University's Colleges of Arts and Sciences; Business; Education; Engineering and Technology; Health and Human Services; and, its graduate school. EMU is regularly recognized by national publications for its excellence, diversity, and commitment to applied education. For more information about Eastern Michigan University, visit the University's website.