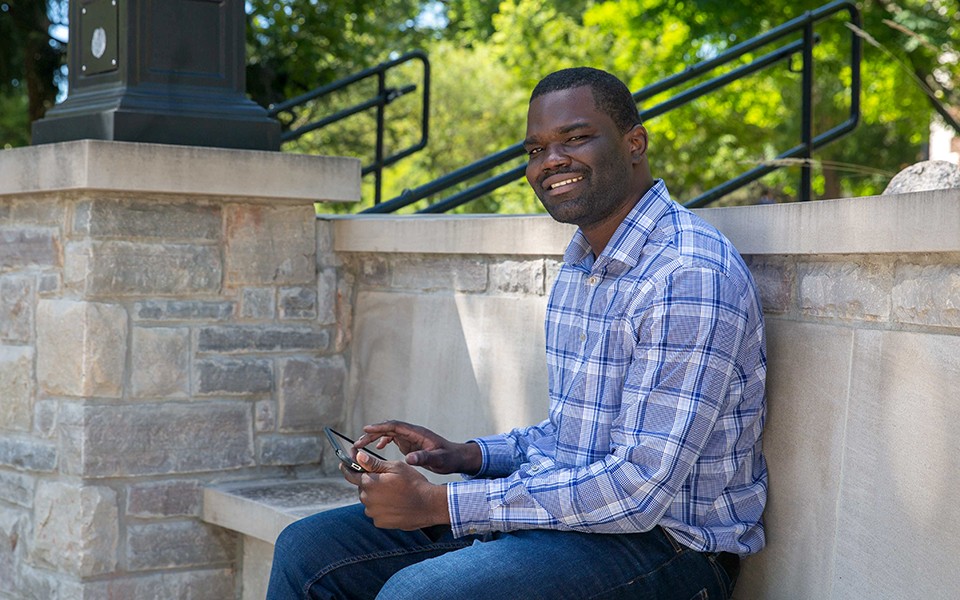 Paul Katokwe is an EMU finance student and graduate assistant from the Democratic Republic of Congo.

A great example is Paul Katokwe, a current EMU finance student and graduate assistant from the Democratic Republic of Congo. Katokwe began his studies in the U.S. in January 2016 at Washtenaw Community College and ultimately transferred to Eastern after obtaining his associate's degree. Katokwe’s transition didn’t happen without his fair share of lifestyle and financial challenges.

During Katokwe’s first year at Eastern, his father was his primary source of financial support. After learning that his father retired and that he would need to explore other options, Katokwe began to seek resources available to students on EMU’s campus. Swoop’s Pantry became a vital source for him during that time, in addition to on-campus computer labs.

“After finalizing my transfer at EMU, I could work an on-campus job to make ends meet,” said Katokwe. “I made connections that would help me further my education financially.”

Katokwe became heavily involved in the campus community, where he met with Kenneth Lord, dean of EMU’s  College of Business. Through this connection, Lord helped Katokwe obtain substantial financial aid to further his education and assist with his educational needs amid the 2020 pandemic. During the same year, after spending several months unemployed due to COVID-19 restrictions, he also received funding from EMU’s emergency fund to help pay for rent and other living expenses. “I would say that 2020 was the most challenging year in my academic journey at so many levels, but several community members and resources at EMU helped alleviate the burden.”

“I still recall the day Kim Barker, full-time lecturer at EMU’s College of Business, drove to my place with her daughter just to hand me a comforting card and tell me it was going to be okay,” said Katokwe. “Community members like Kim Barker have gone above and beyond in supporting me personally and academically and this is what makes me feel EMU is my second home away from home.”

Although Katokwe’s financial obstacles did not hinder him from reaching academic excellence, he is continuously taking advantage of an array of campus resources to help boost his performance in the classroom since joining EMU. Today, Katokwe is on track to graduate in December with a cumulative 4.0-grade point average.

He also secured an internship at Foresight Capital Management Advisors, Inc. as a financial analyst in May. When asked about his post-graduation plans, Katokwe hopes to be able to visit family back home, in addition to enrolling in EMU’s doctorate program, as well as starting a career in the finance field.

“I want to share my experience with students to let them know that anything is possible,” said Katokwe. “Being able to complete my education at Eastern has changed my life for the better and has opened doors to great opportunities, despite the financial hardships I’ve experienced along the way.”