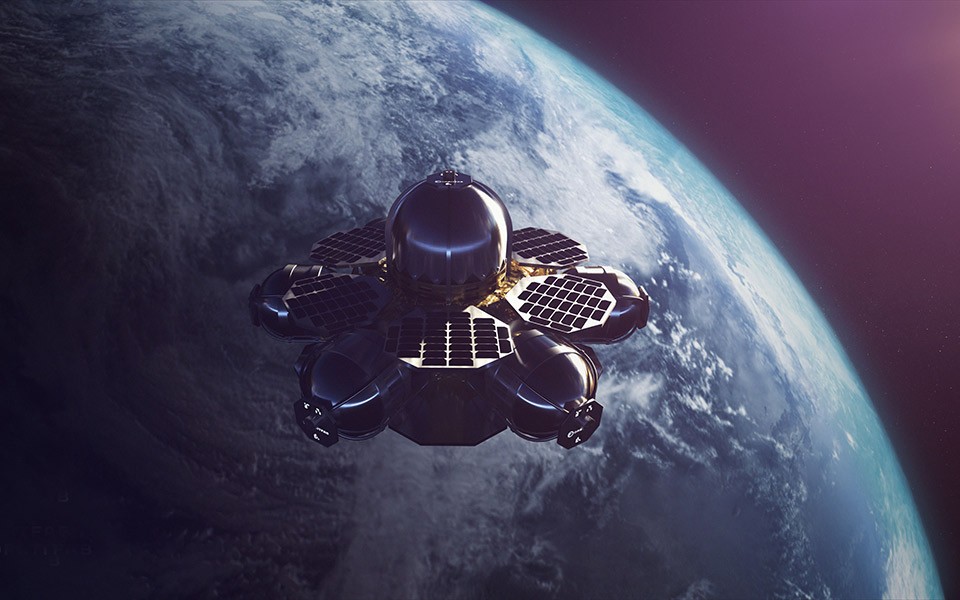 Design concept for Orbit Fab’s Tanker-002, mounted on a Spaceflight Sherpa-ES with fuel tanks attached to each ESPA ring slot, in transit to geostationary orbit. (Courtesy of Orbit Fab)

YPSILANTI – The stars aligned for Eastern Michigan Alum Jeremy Schiel, who co-founded Orbit Fab, the Gas Stations in Space™ company, after earning a bachelor’s degree in international business with a specialty in management from Eastern. Orbit Fab builds orbital propellant depots so satellites can fuel up when necessary and deliver supplies to satellites and commercial space stations.

“I always had an interest in space, further stimulated by my visit to Chicago’s Adler Planetarium when I was eight years old,” said Schiel. This helped fuel his desire to one day explore and pioneer space and humanity’s role in the cosmos.

When Shiel arrived at Eastern, he was determined to combine his passion for space with his studies in international business. In his sophomore year, he discovered a company called Deep Space Industries and applied for an internship.

A benefit of Schiel’s internship was meeting the company CEO Daniel Faber, who not only mentored him but became a co-founder of Orbit Fab. However, the journey didn’t come without hiccups for Schiel and his new start-up.

“I purchased a one-way flight to California to work on the startup, then quickly blew through my savings,” said Schiel. To survive while working full-time on Orbit Fab, I took on a consulting job, leading to three months of 110-hour work weeks and six hours of sleep per night.”

At just 28, Schiel and his co-founder have grown the Colorado-based company to what will soon be an international organization. Since 2013, Orbit Fab has created gas stations in space by allowing the space industry to be more flexible and sustainable by providing orbiting satellites a way to refuel. The aerospace startup has raised more than $14 million from investors, including Lockheed Martin and Northrop Grumman, to build celestial gas stations.

He also signed a $13 million contract with the government to deliver hydrazine fuel to Space Force satellites in 2025.

Recently, Schiel was named Forbes Magazine’s 30 Under 30 because of the potential impact of Orbit Fab’s concept.  “This award is not won alone,” said Schiel. “It takes an entire team to build the future and make the impossible possible. This award is a testament to the entire team and advisors that Daniel and I have built up around us. You can only go so far alone, and it’s important to ask for help and surround yourself with people you want to be like and learn from.”